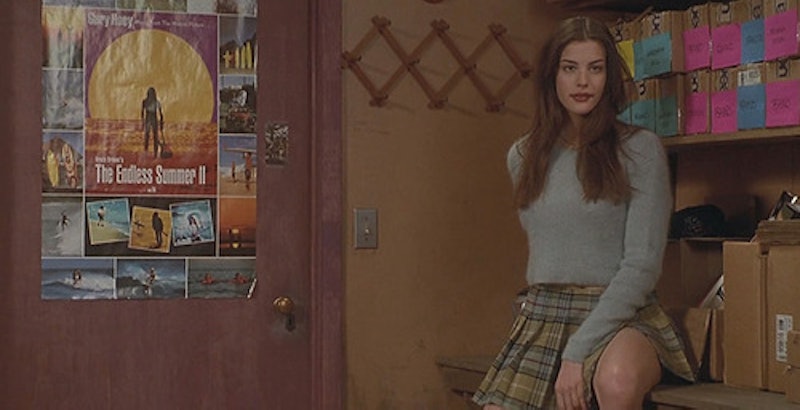 Happy Rex Manning Day? Prepare to feel old, guys, because the cult classic Empire Records turns 20 this year. While it hardly holds a candle to Clerks, in my opinion, it's still an viable window into Gen X and the accompanying aesthetics. See, the incredible '90s style in Empire Records helps tell the story behind each of the heroines... and even if it didn't, the fashion is so fun to watch in action on screen.

That's because Empire Records arrived at an interesting point in history — the beginning of the post-Cobain mid '90s. Grunge lingers heavy in the air still, of course, and it's influence dominates the heart of the film (hello A.J. and his grandpa cardigan). But it's already on the decline, ready to get taken over by the Rex Mannings of the world. This apex in style and culture, plus attention to the ragtag team of employees and their collective fragile egos, really help tell the story of that one crazy day at the record store. So I'm gonna turn the lens on the ladies of the store, specifically Corey, Gina, and Deb (or a pre-famous Liv Tyler, Renee Zellweger and Robin Tunney).

Damn the man, save the empire, and pay homage to these killer '90s outfits.

With her soft, fuzzy, baby blue crop top and plaid skirt, Corey's look coveys innocence, which teetering on the edge of sexual. This connotation makes sense; in addition to being a over-dedicated student, her primary quest in the movie is to lose her virginity.

But bless her heart, Corey is no Gina, and when the latter's red bra clashes against the former's cotton white undies, it SHOWS. The combats boots are ultimately what give her an edge... just like her casual indulgence in Adderall gives her an edge.

Our girl Gina, however, is a fountain of sex appeal, and probably the only one who can make an orange smock look seduction-worthy. While Corey has her own slender beauty, Gina is able to make herself leggy as hell by wearing the shortest a-line micro-mini of all time. The mid '90s were pretty bold when it comes to such miniskirts, see Rachel Green in the first season of Friends for details.

Equally bold? Well, you'd think that cardigans are particularly for dowdy pre-makeover rom-com heroines, but Gina styles hers to the contrary. That is, she wears no shirt under it so the infamous red bra can peak out and say hello. It's a bold fashion risk to take, but Gina makes it work.

Now, could you argue that Gina's skimpy outfit is exists to cover up her insecurities, much like her promiscuous (and I saw that word with zero judgement) streak? Perhaps. But even if that's not the case, I just think she looks cool. Don't really get the sling-back heeled clogs, tho.

Throughout the film, each of the ladies are dealing with their own inner bullshit, but Deb shouts it the loudest with that haircut. Though silent, moody, and seemingly passive (which the characters seem to imply is her default mood), the shaved head, hair chunks still lying in the sink, is clearly a cry for help. The wrist bandages from her suicide attempt seem to reinforce that, even though lolz are had when she says she tried to off herself with a "pink plastic razor with daisies on it and a moisturizing strip."

Beyond that, Deb's every day look meshes with her new cut: the chains, hoodie, baggy jeans and wifebeater read as classically tough. You strongly doubt that Deb is the kind of chick who invested in the likes of Kim Gordon's X-Girl clothing — the visible bra straps and IDGAF attitude imply she's pretty low maintenance — but it's very reminiscent of that vibe. Overall, her look solidifies her as Empire Record's G.I., and her bathroom heart-to-heart with Corey reveals she is a lot stronger than anyone gives her credit for.

More like this
Rita Ora’s Sheer Dress & Mermaid-Inspired Prosthetics Stun At British Fashion Awards
By Sophie McEvoy
'The Holiday' Director Just Addressed *Those* Sequel Rumours
By Sam Ramsden
These ‘Love Actually’ Plotlines Are “Out Of Date,” According To Director Richard Curtis
By Grace Wehniainen
This Iconic ‘Love Actually’ Scene Drove Alan Rickman “Insane”
By Grace Wehniainen
Get Even More From Bustle — Sign Up For The Newsletter