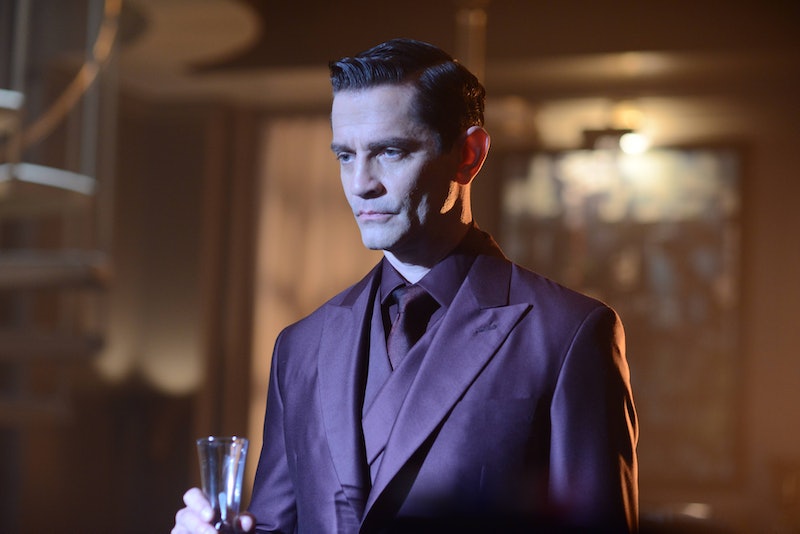 There are a lot of reasons to tune in for Monday night's Gotham Season 2 premiere. For starters, it signifies the return of some beloved character favorites, including the likes of Jim Gordon, Selina Kyle, Bruce Wayne, and Oswald Cobblepot (aka The Penguin), just to name a few. But if that alone isn't enough to entice you, then the introduction to Season 2's newest Gotham additions definitely should. It's always exciting to see brand new characters brought into fold, not just because their presence creates interesting dynamics among the series regulars (though that's certainly true), but also because they're shrouded in mystery.

Whether you've heard of them from the comic book world or not, you have yet to see them appear on the small screen, so there's no telling how exactly their characters will be portrayed. What are their motives? What fuels their actions? These answers are all unknown at this point, which makes figuring them out all the more intriguing. So who are these new cast of characters making their way to Gotham City? And — perhaps more importantly — will they prove to be a great friend or a formidable foe? Check out the round up below and get pumped for what's sure to be another action packed season.

Like most of the characters Frain is known to play, Theo will prove to be all sorts of shady right off the bat. And given that he comes from a wealthy family, he'll have the money and power to make some serious changes to Gotham City… and not exactly for the better. Oh, and he kinda sorta maybe has a thing for Barbara. So that's going to end well.

According to TVLine, Tabitha is described as "sexy and violent — and toting a bullwhip! — she’s the opposite of her cold and calculating brother [Theo], deriving a sensual pleasure from the mayhem she’s tasked with making." Sounds like a lady that is not to be trifled with. Perhaps she's here to pick up the fierce reigns Fish Mooney left behind.

On the good guy front we have a new Gotham City Police Captain in town, who is described as a "law and order zealot" and will act as a mentor of sorts to Gordon, "someone with whom he can share the burden of heroism." (Sorry, Harvey Bullock, but it looks like your role modeling days are done.)

Back in April, Gotham executive producer John Stephens shared with Collider at WonderCon that the chilling villain Mr. Freeze would more than likely be getting a Season 2 origin story. "We always want to walk the fine line of the reality of our world. Walking right up to that line where super-villains live. So there are a lot of characters from Batman lore that fit that bill. People like Victor Freeze – who’s a science villain. You can play a lot of his abilities without going into the world of superheroes." Sounds pretty "cool" to me.

In the same interview, Stephens went on to add that "Clayface and Mad Hatter are both villains we’re going to bring in [as well]. They both have great backstories and great personalities. Clayface especially is a character I want to [explore the origin of]." So be on the lookout for those two as the season progresses.

Though the DC Comics firestarter is usually portrayed by a male, TVLine has exclusively learned that Veintimilla will be carrying the fiery torch (so to speak) as both Firefly and her human alter ego, Bridgit Pike, in two episodes of Gotham's second season as she's "transformed into a vengeful supervillain, hell bent on destroying those who have wronged her."

Showrunner Danny Cannon revealed to Den of Geek that "Azrael is a really good long, slow-burning origin story" that fans have to look forward to in the coming season. And given that Azrael is known in comic book circles as being a highly trained assassin, I'd say the visit will be a bloody good time.

Meet Bruce Wayne's love interest of the season! Described as "an ethereal beauty with the pristine manners of a Gotham debutante," Silver also lost her parents at a young age, which explains why she and Bruce hit it off with each other. Sorry, Selina, but there's a new feline in town. However, considering the fact that she's also Theo's niece, I'd say there's more to this girl than meets the eye. Proceed with caution, Master Wayne…