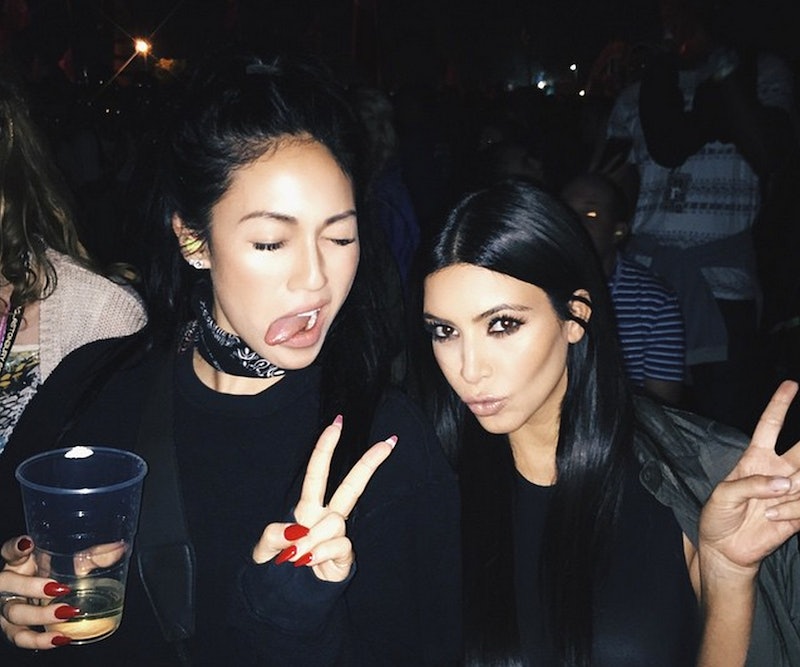 At this point, I think I have no choice but to keep up with the Kardashians. They are literally everywhere and now that they are procreating, I have a feeling the Kardashian/Jenner clan is going to be around for many more generations to come, so we all might as well just embrace it. You cannot deny that their extravagant lives are fascinating and so are the lives of the people that are part of their intimate and tight circle. What is it like to be part of the Kardashian crew? Well, one person who certainly knows is Kim Kardashian's assistant, Stephanie Shepherd.

So, who is Shepherd? How did she becomes the right hand to one of the most famous women on planet Earth? It's a bit of a mystery, but she was friends with Robin Antin before she met Kardashian, so I think Shepherd and her current employer may have met through the Pussycat Dolls founder. (Remember that episode of Keeping Up With the Kardashians when the 34-year-old made a guest appearance in the burlesque show? These people are all connected!)

Shepherd has definitely been around Kardashian's life since her wedding to Kanye West last year, because she was a big part of all her festivities, including the KUWTK star's epic bachelorette party in Paris. Kardashian and the rest of her sisters have shared plenty of photos with the beauty and she looks just as natural in the limelight as the first family in reality TV does.

Here are some facts about Stephanie Shepherd, the girl who might have the most extravagant job in the world.

She Was A Professional Dancer

Before she became Kardashian's assistant, Steph Shep was a dancer who actually performed on the Grammys and rubbed up on Pitbull. Who knew?

She Has Modeled Before

She has got the sexy, troubled stared down.

She Was At Kimye's Engagement

This is the first photo she has posted on her Instagram of herself and Kardashian together.

She Coordinates Her Looks With Kim

I wonder who she gets it from?

She Is Also Her Personal Photographer

Kardashian recently launched her new website with loads of personal and behind-the-scenes photos. She did a shoot with legendary photographer Juergen Teller and Shepherd is credited as the photographer of all of the behind-the-scenes polaroids. In addition, Kardashian said during a panel for her new website and app at the Apple store in New York City's Soho neighborhood:

I've done a lot of photo shoots just for the site, just for the app. And behind-the-scenes footage. I’ve spent the last two years with my assistant, Stephanie, running around taking video, waking up at 6 in the morning in Thailand just to go to a waterfall to take video for the site.

Well, sounds like Shepherd has her work cut out for her!

More like this
Kim Kardashian Gives “Bucket List Dream” Lecture At Harvard
By Alyssa Lapid
Twitter Has Renamed Ekin-Su After *That* 'Dancing On Ice' Performance
By Sophie McEvoy
This Pre-'Love Island' Video Of Olivia & Zara Together Changes Everything
By Bustle UK
Twitter Can’t Make Up Its Mind About Ekin-Su’s 'Dancing On Ice' Skate-Off
By Sophie McEvoy
Get Even More From Bustle — Sign Up For The Newsletter
From hair trends to relationship advice, our daily newsletter has everything you need to sound like a person who’s on TikTok, even if you aren’t.