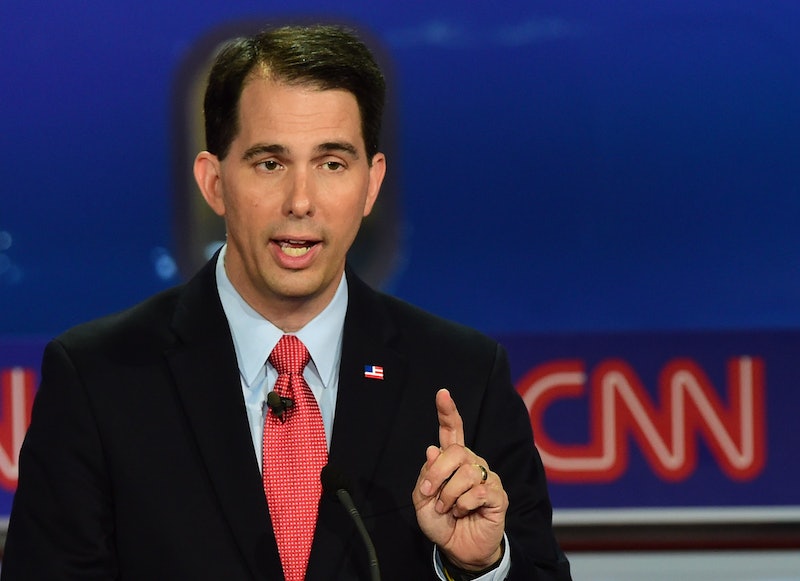 On Monday, The New York Times reported that Scott Walker is dropping out of the presidential race. The Wisconsin governor called a press conference for Monday evening in Madison, where he's expected to make the announcement. With 16 Republican candidates running, it was inevitable that some would have to give up on their dream of living in the White House, and Walker will be the second to do so, after Rick Perry quit earlier this month. But why is Walker dropping out of the 2016 race now?

According to three Republicans in the know who talked to The Times, the decision is mostly about a lack of money. A Walker supporter briefed on the situation told the Times: "The short answer is money. He’s made a decision not to limp into Iowa." Walker's poll numbers have gradually dropped, which caused fundraising efforts to follow suit. His campaign officials didn't want to go into debt for a presidential race with little certainty, according to the same supporter. Walker's campaign had a large staff, with aides and consultants for very specific outreach demographics, and according to The New York Times, he didn't have enough money to keep up such a large effort. Some of Walker's financial backers blamed his campaign manager, Rick Wiley, for the financial troubles. The campaign had around 90 staff members, and many supporters felt that Wiley expanded too quickly and didn't adjust the campaign's spending appropriately.

A fundraiser for Walker's campaign was supposed to take place in New York City on Thursday, but not many potential donors wanted to go. One of his top donors told The New York Times: "Donors have totally dried up for Walker, and getting people to come on Thursday was unbelievably hard. Everyone I know was just totally stunned by how difficult the fundraising became, but the candidate and the campaign just couldn’t inspire confidence."

Early on, Walker was leading the GOP in Iowa polls, but he received less than half of 1 percent of support in the most recent CNN/ORC national poll. Such numbers put him among the lowest-ranking candidates, including Lindsey Graham, Bobby Jindal, George Pataki and Jim Gilmore, who haven't qualified for either of the prime-time GOP primary debates. Although Walker participated in both debates, his lackluster performances only hurt his poll numbers, while Carly Fiorina and Donald Trump dominated attention.

With Walker gone, there are now 15 Republican candidates still competing for the GOP presidential nomination.