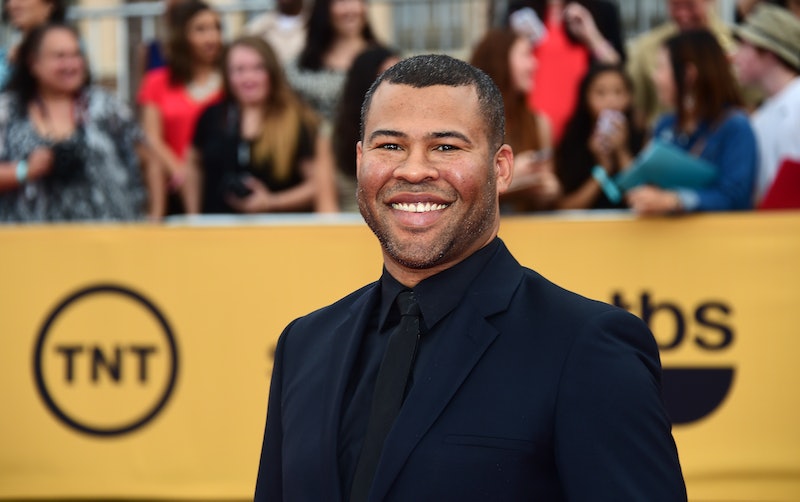 We're about to see an entirely different side of this Key & Peele actor. Jordan Peele may be one of sketch comedy's best, but his latest project is more likely to make you scream than laugh — and, while he's at it, he may just make you think about some pretty important stuff. As reported by The Hollywood Reporter, Peele is making a horror movie that will confront race relations in America. The film, titled Get Out, will be a Blumhouse Production and tells the story of a black man (Peele) who visits his white girlfriend's family's estate. Obviously, terrible things ensue, but amidst the mayhem could be one of the most important horror movies we've seen in a long while.

The horror genre has a long history of tackling social issues through its often disturbing concepts. The 1968 film The Night Of The Living Dead drew parallels to the Civil Rights movement and the struggles of the black community within its zombie story. The 1982 film White Dog's "monster" (a dog trained to kill black people on sight) was used as a metaphor for how we should combat racism within society. It makes perfect sense for a horror film to discuss racism: racism is an ugly, infectious thing, and while it may not be a monstrous dog or a pack of zombies, it certainly has the power to bring its own unnecessary destruction.

Get Out won't be the only recent work of horror to spark conversation about underlying social issues. It Follows suggested big ideas about sexual politics, and The Babadook explored the often unseen struggles of unsupported single parents, and even the gimmicky (but great) "webcam movie" Unfriended warned the world of the dangers of our social-media saturated existence. Yes, we still have plenty of money-making sequels on the market (hey, Sinister 2 looks damn scary!) but that's not all we're being offered.

As for its specific social issue, it's about time that a film tackles race relations head-on. We may be decades out of the Civil Rights movement — unlike films like Night Of The Living Dead, in which the movement was a part of everyday life — but problematic race relations are anything but history. Get Out will be able to discuss these more nuanced issues through the horror lens, perhaps illustrating the ways we haven't yet come as far as we think we have. After all, as past horror films have proved, sometimes all it takes a little bit of blood and guts to digest some of the most uncomfortable societal issues.