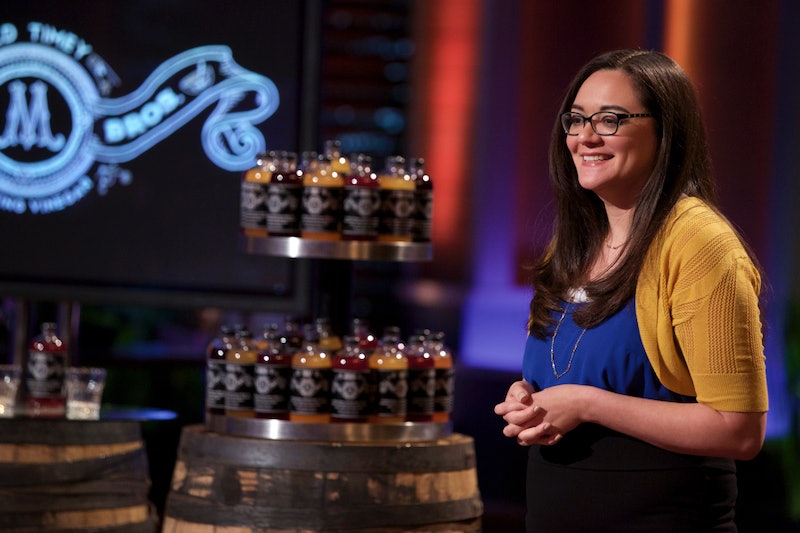 When it comes to alcohol, many people will inhale whatever drink is put in front of them. However, if your taste buds are of the more discerning variety, when you shell out money for an alcoholic beverage, you probably want one that has some flavor to it, right? Well, look no further than the drinking vinegars from McClary Bros., which will be headed into the Shark Tank during the show's Season 7 premiere.

In case you didn't know, the Sharks are quite wealthy, so it's going to take a lot to impress their refined palettes. However, McClary Bros. makes a product that is unlike anything that has come through those scary-looking Shark Tank doors, so maybe the sheer novelty of this line of handcrafted cocktail mixers will be enough to pique their interest alone.

It's already worked on me. I mean, what is a drinking vinegar anyway? All I know is that vinegar is not usually something I want to drink straight up, even if there is some booze mixed in with it. The entrepreneur behind McClary Bros. is going to have a lot of explaining to do to the Sharks, and the Shark Tank audience, about why we should pour one of these into our next cocktail. Luckily, everything you need to know about McClary Bros.' drinking vinegars will be revealed soon enough.

Though you may have never heard of drinking vinegars, like most things that are a part of this handcrafted, hipster, artisanal culture that we live in, these cocktail mixers originated many years ago. Drinking vinegars, or "shrubs" as they are more commonly known, were popular during Colonial times when people used vinegar to preserve fruit, and soon discovered that the leftover liquid made a tasty mixer with liquor like rum. McClary Bros.' line of drinking vinegars are made with "organic, unpasteurized apple cider vinegar with fresh, seasonal ingredients and organic cane sugar," according to the company's official website. No matter what your feelings are about vinegar, you have to admit that sounds pretty tasty.

2. McClary Bros. Keeps It In The Neighborhood

McClary Bros. is not only based in the metro Detroit area, but it also sources many of its ingredients from Michigan farmers. The company also makes its drinking vinegars at Forgotten Harvest, an organization that helps facilitate and deliver food to 280 emergency food providers in the metro Detroit area. Through this partnership, McClary Bros. helps Forgotten Harvest serve more people and train workers in food manufacturing. And, as if McClary Bros. hadn't shown enough Michigan pride, the company was also a founding member of FoodLab Detroit, which is an organization of food businesses and allies dedicated to bringing healthier and more sustainable food to the local community. Clearly, McClary Bros. feels the love for the Motor City.

If you're feeling thirsty for some McClary Bros. drinking vinegars right about now, I can't say I blame you. You can quench that thirst by visiting one of more than 250 locations in 14 states where McClary Bros. is sold. But just because "shrubs" were made popular centuries ago doesn't mean you have to purchase them the old-fashioned way. You can also buy McClary Bros. products online through the company's official website, and through Amazon. There are currently four flavors to choose from (Detroit Thai Basil, Lemon & Ginger, Michigan Basil, and Michigan Beet & Carrot). Each costs $18 for a 16-ounce bottle, except for Detroit Basil, which retails for $25 for a 16-ounce bottle because it's a premium flavor. But really, can you put a price on taste?

4. The Founder May Surprise You

The entrepreneur behind McClary Bros. is actually a McClary sister. Jess McClary first came up with the idea to make and sell drinking vinegars after going to culinary school when she started to dislike baking for its many unhealthy ingredients, according to the company's official website. She realized that she wanted to make something with healthy and local ingredients. After researching old-fashioned preservation techniques, as one does, McClary stumbled upon drinking vinegars, and the idea for her new business was born.

5. So Then Who Are The McClary Bros.?

If this company isn't run by two brothers wearing bowler hats and handlebar mustaches as I had imagined, where does the name McClary Bros. come from? Well, it's actually an adorable explanation. McClary named the company after her twin sons Jack and Ben, both of whom she hopes takes over the business one day. Hopefully, they'll be wearing bowler hats and handlebar mustaches by then, too.

6. Drinking Vinegars Have Many Uses

Drinking vinegars don't have to be just for drinking. You can use them as you would normal vinegar, putting them into salad dressings, marinades, and sauces. website. For those looking for a non-alcoholic beverage to enjoy the drinking vinegars in, you can also use it to make a healthier soda. You may just find yourself wanting to drink McClary Bros. all of the time.