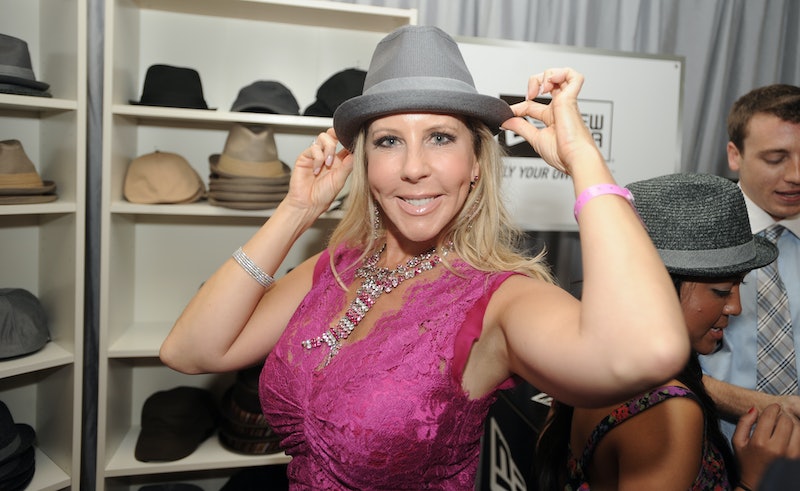 Longtime Real Housewives fans have to appreciate Vicki Gunvalson. She is the only original Housewife from the original series in the franchise who is still around. As she say says in her introduction tagline this season, Vicki is the "OG of the OC." I don't know what I would do if she ever left Real Housewives of Orange County. Us fans have been following her story from the very beginning of this phenomenon and there are so many reasons Real Housewives fans will always love Vicki Gunvalson. She can be controversial at times and often polarizing, but when it comes down to it, that love will always be there from the die hard fans.

Even if you are not actually a Vicki supporter, you have to appreciate the reality TV gold that she has provided us with over the years. She has been a part of some of the most classic moments in Real Housewives history, not just the RHOC series specifically. And as such, her contributions should definitely be celebrated. The woman is reality TV royalty. I mean, the memes don't lie. She has really had some of the most quotable lines and memorable moments that us fans will never forget. There are so many reasons why us RHOC fans will always love Vicki Gunvalson.

1. She Has An Awesome Catchphrase

When I think of Vicki, my first thought is an emphatic "woo-hoo!" Vicki is always down to have fun and there's no better way to get the party started than Vicki yelling "woo-hoo!"

2. She Has No Shame When It Comes To Partying

Vicki goes all out in everything she does, partying included. Once Vicki is in, she's all in and I love that about her.

3. She Really Goes There With Her Insults

Vicki says what's on her mind and it always makes for a jaw-dropping moment.

4. She Always Threatens To Quit The Show... But Never Actually Has

RHOC would be nothing without Vicki. Even with all the stress and drama, she cannot stay away and we are all grateful for that.

5. She Isn't Afraid To Show Her Raw Emotion

The 53-year-old is not afraid to let it all out in front of the cameras. She does not hold back and it's so clear that we are watching something totally authentic.

6. She Doesn't Care What People Think

VIcki is Vicki and she will only change on her on accord.

7. She Is Never Boring

When the other Housewives are going on and on about home renovations and themed parties, I take that as my cue to get up and grab a snack. But when Vicki is on TV, things are always interesting.

8. She Recognizes Her Own Faults

Vicki is adamant about doing things her own way, but when she finds fault in her own actions, she has no shame apologizing and taking responsibility.

She always want to be the best and her strategy is clearly working since she is the only original Housewife remaining on the show.

10. She Is The Regina George Of RHOC

I feel so bad for the new women who join RHOC, but it's also interesting to see how they are all constantly seeking approval from Vicki. She is the queen bee and they all bow down.

11. She Provides The Most Priceless Moments

Vicki is a boss and she owns it. She loves working and being able to provide for herself and her family. She actually a pretty great role model in that respect

Even Vicki admits that she brings the crazy and us fans woulnd't want anything less from her.

14. She Is Always Trying To Make Herself Better

Vicki is always striving to improve, and her optimism and determination are inspiring.

Vicki is the original Housewife. How can you not love her? Come on!