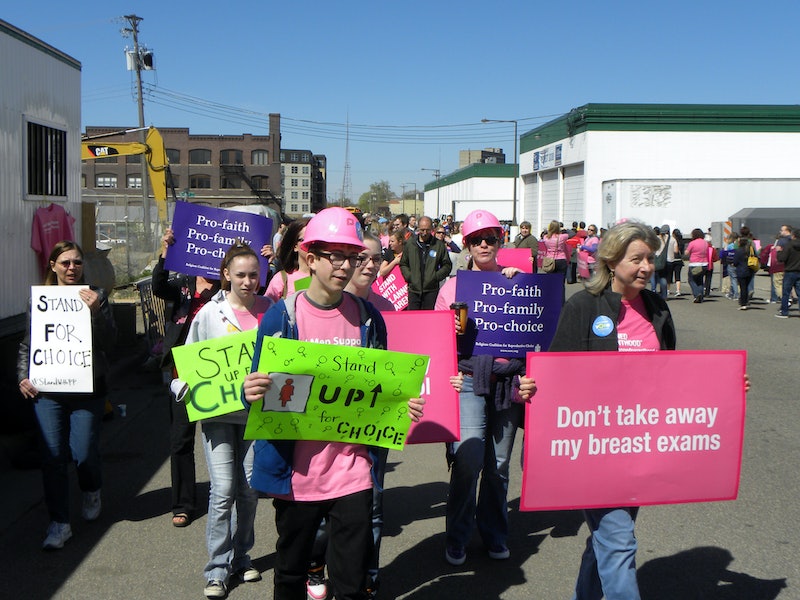 Last Friday, the House voted 241-187 to strip Planned Parenthood of its federal funding (approximately $500 million in total) for one year. During that time, conservatives say, they hope to "investigate" allegations made by the Center for Medical Progress, which recently accused the organization of selling "baby parts" for profit — something experts have widely dismissed. But in the wake of the controversy, several pro-choice advocates have stepped forward to take back the conversation. On Saturday, writers Lindy West and Amelia Bonow launched the hashtag #ShoutYourAbortion on Twitter in an effort to shatter the stigma and reverse the shame that often comes with talking about abortion. In doing so, West and Bonow join actress Lena Dunham, whose own Twitter campaign, #AskYourMother, opened a frank discussion about having an abortion in pre-Roe days just last week.

The recent backlash against Planned Parenthood comes after several videos created by the CMP were released to the public, in which Planned Parenthood employees allegedly discuss selling tissue from aborted fetuses. Though experts have indicated that the videos appear to be fraudulent and manipulated, their very existence has nonetheless hurt an organization that's provided millions of low-income women with free healthcare for decades.

As Planned Parenthood advocates have repeatedly pointed out, not one single federal dollar that goes to the organization is ever used to cover abortions. That being said, it shouldn’t matter. We shouldn’t have to excuse Planned Parenthood by reminding people that abortions make up only three percent of its health services. The procedure is just as valid a service as a mammogram, and it deserves no less respect. That's exactly what West and Bonow aimed to accomplish with their hashtag, and by the looks of things, they already have.

Within hours, the hashtag spread like wildfire, and the stories that resulted quickly demonstrated just how common and safe abortion really is. The women who tweeted about their abortions concisely explained their side of the story; that their abortions were carefully-considered, well-thought-out decisions on their parts, and that their lives are now better for it.

Abortion is a safe, common medical procedure in the U.S. (for now). In fact, three in ten U.S. women will have an abortion by the time they’re 45 years old. And none of them should be ashamed of it. If anything, Planned Parenthood needs more funding, not less, so that it can continue helping women across the country.