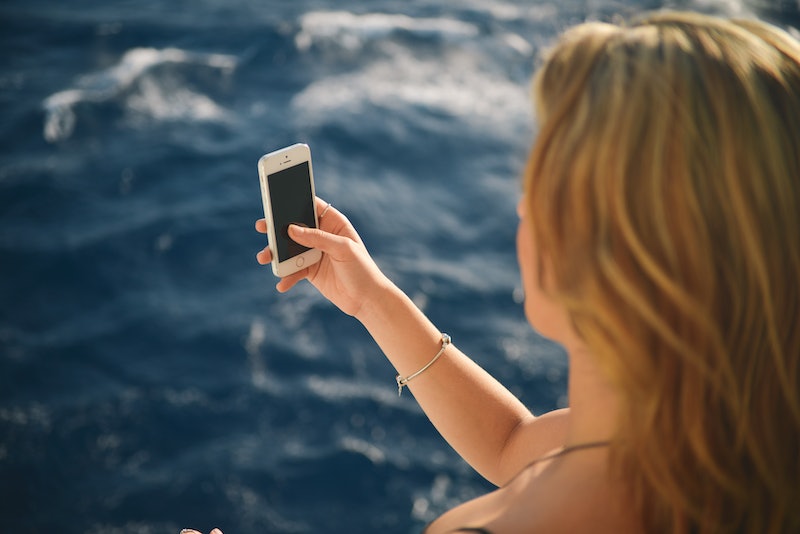 Do you have a fear of sharks? If so, it's time for a reality check, because it's somewhat unlikely you'll die from a shark attack. In fact, more people have died from taking selfies than they have from shark attacks this year, so maybe it's time to stop worrying about Jaws and start worrying about your smartphone. Uh... yikes.

According to Mashable, 12 people have died from selfie-related incidents so far in 2015, while only eight have had their lives claimed by sharks. It sounds kind of funny at first glance, but it's really not; first off, we're talking about actual people here, and second, it demontrates that we actually should probably be reevaluating our selfie-happy culture.

Let's take a look at how these death-by-selfie incidents occurred. Of those 12 selfie casualties, four — that is, 33 percent — were due to falling, making it the most prevalent cause of selfi-related death. The most recent of these incidents happened when a 66-year-old Japanese tourist named Hideto Ueda fell down a flight of stairs while trying to take a selfie at the Taj Mahal in India. He unfortunately hit his head during the fall and was unable to recover.

The culture of selfies seems to be overtaking, well, every culture; however, more and more monuments and tourist attractions are also banning selfie-taking due to safety concerns. It is no longer permitted to take selfies at the running of the bulls; selfie-related injuries have caused parks to close; and selfie sticks have been barred at an increasing number of landmarks and theme parks, including The Palace Museum in Beijing, Lollapalooza, and even Disney World.

The problem has actually been addressed by Russian officials, who created a brochure to warn against the possibly dangerous effects of selfie taking, after several deaths happened in the country due to people taking selfies in dangerous conditions.“Unfortunately we have noted recently that the number of accidents caused by lovers of self-photography is constantly increasing,” Yelena Alexeyeva, an aide to the interior minister of Russia, told the Guardian. “Since the beginning of the year we are talking about some hundred cases of injuries for sure," he added.