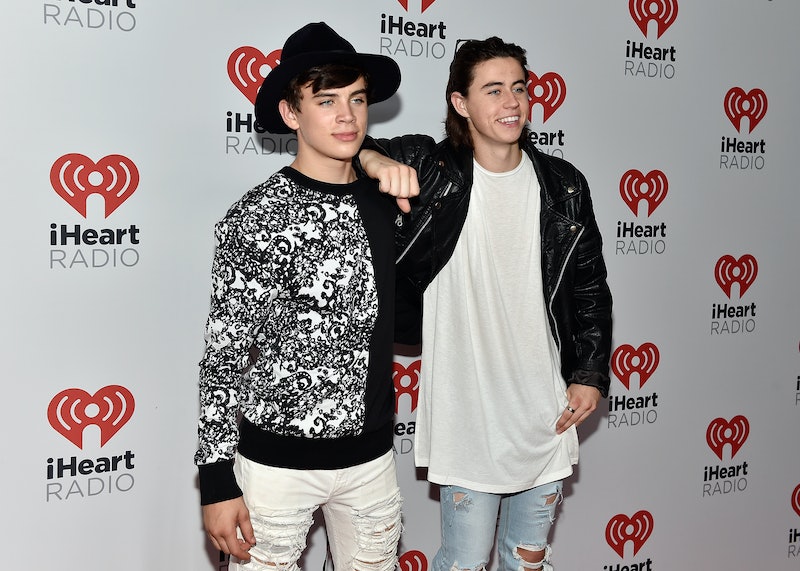 The Grier brothers are stepping out from beyond the Internet screen and into more and more households. Now that Hayes Grier is a cast member on Dancing With the Stars , you can bet more people than ever are trying figure out just who he is and what exactly his claim to fame is. Hayes has a massive following online, but, at least pre-DWTS, was still following in his brother Nash's Vine star footsteps. So, since there's nothing wrong with a little sibling rivalry, let's look into the differences between Nash and Hayes Grier.

To start, it should be mentioned that Nash has faced some controversy. In the past he posted Vines offended many people and were seen as racist, sexist, or homophobic. Nash has since apologized on more than one occasion, including in a December 2014 essay on Huffington Post. Since then, it seems that he has taken his apology seriously and changed his outlook and the content of his videos.

Back to the relationship between the brothers, it seems like they have been able to maintain a pretty healthy relationship without any sort of extreme jealousy. Aside from appearing in each others' Vines, the two are embarking on business deals together, most recently signing on as partners with DigiTour, in which popular online stars make appearances around the country. I never thought there would come a day when the Internet famous would go on tour like musicians, but then again, I am an old dinosaur compared to them.

Anyway, since the Grier brothers are clearly on the up-and-up, let's look into the dynamics of their relationship and see just how different they are.

Nash is older by two and a half years, born in 1997. Hayes was born in 2000. Remember that thing I said about being an old dinosaur...

Sure, they're both pretty popular, but Nash has far more Vine followers than his younger brother, coming in at 12 million over Hayes' 4 million. Still impressive.

Hayes Is A Better Dancer

Maybe Nash is decent, but he's not the one killing it on Dancing With The Stars right now.

That might be the reason he has more followers because Hayes does a lot of re-Vines or videos with his brother on his page.

Nash has taken a page from the Harry Styles rockstar lookbook and dresses accordingly. Hayes still has some time to figure his out, but he seems to more into athletic/sports gear.

They are both social media kings, but when it comes to Twitter and promoting his time on Dancing With The Stars, Hayes is actively re-tweeting and posting photos almost every day. He might surpass Nash, at least on Twitter, very soon.

Sure, the Grier brothers are each stars in their own right and fighting to make their own spot in the entertainment world, but there is nothing but brotherly love between the two.