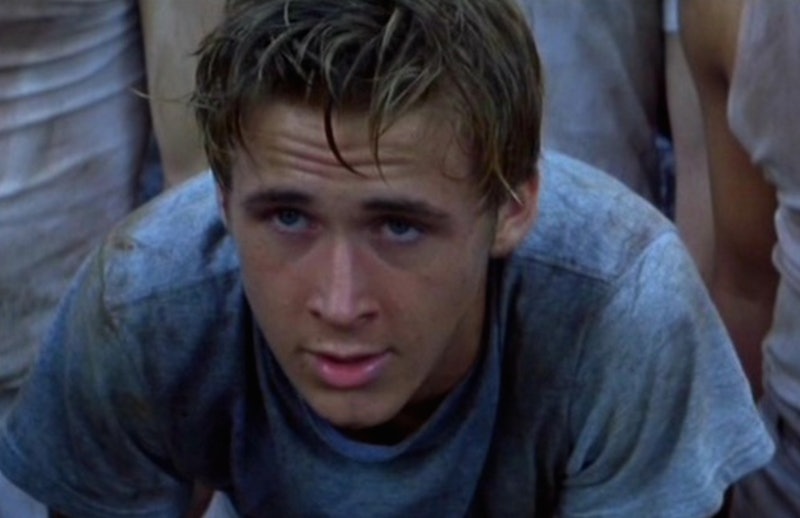 With the iconic sports film Remember The Titans celebrating its 15th anniversary this year, it was inevitable that at some point, the conversation would turn to the one and only Ryan Gosling. It's hard to believe that 15 years ago, Ryan Gosling wasn't a heartthrob. He wasn't yet considered one of the great actors of our generation. He had barely made his mark in film yet. Ryan Gosling circa Remember The Titans had yet to be launched into his now Ryan Gosling-level status thanks to the phenomenon that was The Notebook. Yet the young Gos we did see in Remember The Titans deserves to be appreciated as well.

Sure, he had yet to hit his rugged good look period, and sure, he wasn't totally selling that fake (yet totally appealing) Brooklyn-y accent. But Remember The Titans showed a funny, pleasant side of Ryan Gosling that we would grow to truly love in films like Crazy, Stupid, Love, Half Nelson, and Lars and the Real Girl; and the hard working side of Ryan Gosling we'd fall for even in darker roles like The Place Beyond The Pines and Drive. Gosling as Alan Bosley started it all, not The Notebook. This was the film that began his ascent to star Gosling is today.

Seriously just this. How could anyone not fall for Ryan Gosling with this dance, even with that goofy, ridiculous smile?

Gosling as Alan Bosley was precisely the kind of the teammate people wanted around. He was the first to truly embrace the camp living situation and the idea of appreciating and bonding with the teammates he didn't know. Racial tension didn't come into play for him. He was all about making friends and being a good, happy team.

And that's why his enthusiasm was also infectious. He attempted to get more people to be happy and excited for the venture of a new TC Williams High School football team. Sure, some people didn't bite, but who cares? Those are the people that didn't deserve to make the cut to be on the Titans.

And when things got tough, what did he do? Sure he got frustrated that he had to be taken out of the game. In fact, it was heartbreaking to watch him struggle and try to be a better player, only to have him replaced by someone with more raw talent and yet no official training in the position he was playing. He accepts his fate and tries to stop his father from arguing about the call to pull him out of the game. He patiently waits his turn to get put back in, and when that happens, he excels.

I mean come on. It's Ryan Gosling! Even at this age, it was obvious this guy was going to be a heartbreaker in the best way.

Thank you Remember The Titans, for launching Ryan Gosling from TV star to moviedom, and for giving us all the gift we never knew we needed.