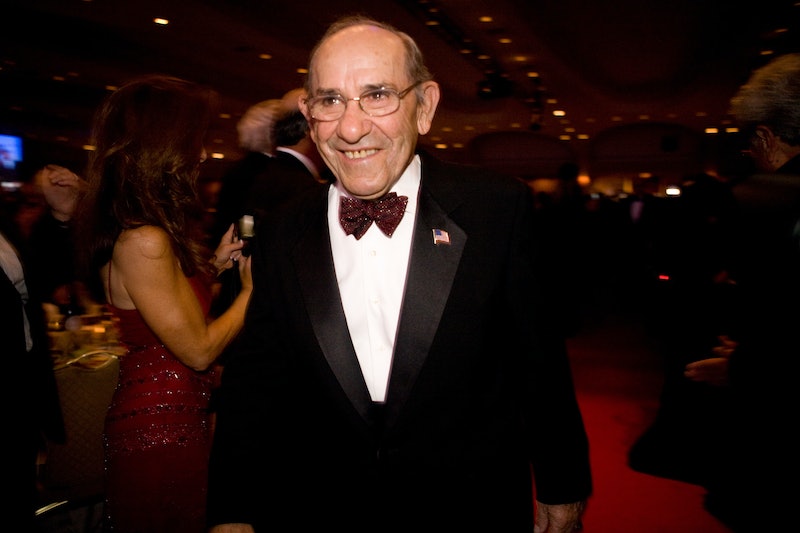 Baseball Hall of Famer Yogi Berra died at the age of 90 Tuesday evening, the Yogi Berra Museum announced Wednesday. Berra played with the Yankees for 18 seasons, 13 of which ended in World Series. He was a part of 10 Yankees championship teams. But he wasn't known only for his baseball skills. Berra also introduced the world to his "Yogi-isms," or little quips about life, baseball, or travel that could be inspirational or just downright strange. The best Yogi Berra quotes seem to make sense even when they don't, imparting a wisdom that also leaves you scratching your head. But that's the best kind, right? I mean, I think?

Berra's Yogi-isms were so famous that he wrote The Yogi Book: I Really Didn't Say Everything I Said!. His quirky personality made him a popular commercial face. He did ads for Yoo-Hoo and Puss 'n Boots cat food, to name a few brands, and he was featured in a number of public safety and security campaigns for municipalities and colleges.

The most famous Yogi-isms were notable for their mixed-up syntax -- which is what made them so great. Here are 15 of the greatest Yogi-isms. They make sense, even though they may not really seem logical.

When he was inducted into the Hall of Fame in 1972, he thanked who he guessed he was supposed to thank:

I guess the first thing I should do is thank everybody who made this day necessary.

Berra was not a fan of fan mail, which he said mostly came to him anonymously:

He believed in doing things the old-fashioned way:

I’m not going to buy my kids an encyclopedia. Let them walk to school like I did.

He was unimpressed by the future:

The future ain’t what it used to be.

He was big on naps:

I usually take a two-hour nap from one to four.

If you plan on traveling, Berra believed that you should probably know where you're going:

If you don’t know where you are going, you might wind up someplace else.

And beware of hotels with fluffy towels:

The towels were so thick there I could hardly close my suitcase.

Berra on social life was, yet again, confusing and hilarious:

Nobody goes there anymore, it's too crowded.

And he was just fed up with inflation:

A nickel ain’t worth a dime anymore.

Berra had infinite wisdom on what to do if presented with a difficult decision:

When you come to a fork in the road, take it.

Berra spouted his most famous quote in 1973, during baseball's National League pennant race. The Yankees were a long way behind when he shared this bit of wisdom, which has become a major rallying cry. Not long after, the Yankees went on to win the division title:

It ain't over till it's over.

Berra's wisdom got existential when it came to repetition:

On baseball, he got pretty literal:

I always thought that record would stand until it was broken.

Berra said baseball was more of a mental sport, though his math doesn't quite add up:

Baseball is 90 percent mental. The other half is physical.

On death, Berra got really philosophical, and maybe a bit creepy:

You should always go to other people’s funerals. Otherwise, they won’t come to yours.