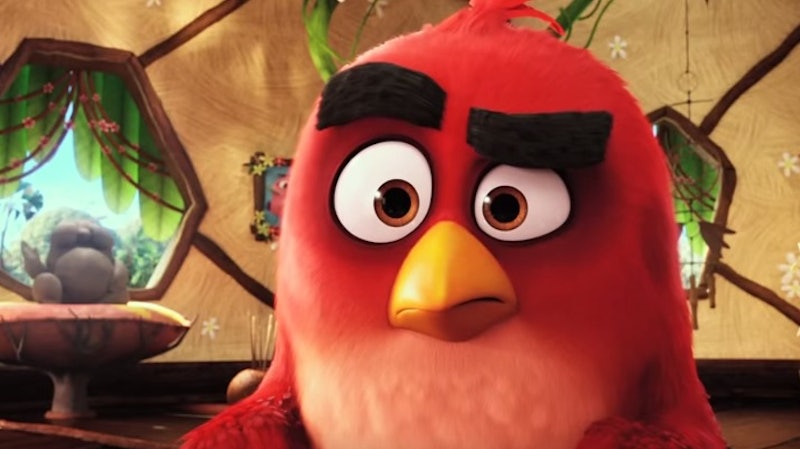 The most anticipated movie based on a smart phone game is coming to theaters May 2016 — and no, I don't mean the probably-bound-to-happen-someday movie based on Kim K: Hollywood. I'm talking about your other favorite smart phone game: Angry Birds! The first trailer for The Angry Birds is finally here, and if you were curious as to how a game of skill could be turned into a whole movie, good news: the trailer actually looks like good fun. Plus, it has a stellar voice cast including everyone from Jason Sudeikis, Peter Dinklage, Maya Rudolph, Keegan-Michael Key, Josh Gad, Hannibal Buress, to Kate McKinnon — what could go wrong? Given the movie is based loosely on the popular game, though, I cannot help but wonder: how much will Angry Birds the movie be like Angry Birds the game?

Plot-wise, the trailer gives us a little: It goes all out establishing Red (aka, the red bird) as an underdog who has terrible luck and anger management issues. He is even attending anger management classes with his fellow birds like Chuck, the hyperactive yellow bird, in an attempt to calm down. Considering the game was never interested in character development past the storyline that the birds were angry at the invading pigs, which led to an invisible force (or, you know, the player) using a giant slingshot to catapult the birds at the pigs and their intricate structures, the movie definitely needs more of a plot. Luckily, it seems the core is present.

The Birds Are Properly Angry

The source of the birds' anger isn't revealed, other than everyday annoyances, but it is significant enough that they need yoga and to occasionally drop kick smaller birds into the ocean. The point is, the birds are disgruntled, as they should be.

Just like in the game, the black bird causes an impressive explosion. I'm sure his skill will come in handy once the pigs arrive.

The Yellow Bird Is Fast

The yellow bird is still way faster than everyone else, and now he sounds like Gad. Bonus!

The Pigs Are Excellent At Construction

The pigs have to be crafty — that's kind of their thing. Luckily, the pigs are not only craftsmen, they also have a really cool steampunk style ship. There's no sign of their egg-stealing tendencies yet, but the trailer can't give away everything.

The Eagle Is Here And He's Free

Remember when the eagle character was a super snazzy bird available only through an in-app purchase? Well now he's just another character wandering around the island of birds. It figures.

It's Going For Laughs

The game was always funny — I mean come on, they're angry birds — so turning the game into a comedy isn't far-fetched. What's cool though is the background detail throughout the trailer. There are jokes layered withing jokes if you pay attention. That is not a level of attention to detail that I expected from this movie, to be honest.

Red Is The Best

No matter how many different versions of Angry Birds come along, Red is and always will be the best character and (almost) everyone's favorite bird. The movie captures him in all of his scowling glory, so even if Angry Birds the movie isn't your thing, at least it is giving Red a chance to glower angrily for two hours.