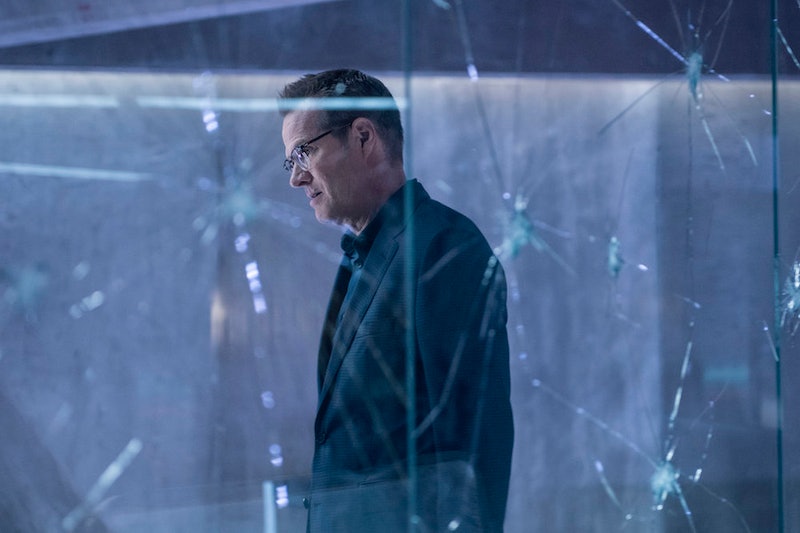 You may not know me, but I watched four seasons of Heroes so you wouldn't have to. Bear in mind, this was the 2006, college version of me, who was known to sometimes skip her Monday evening classes, because there was no such thing as "DVR" or "streaming" or "Hulu" yet. So if I missed Heroes on Monday night, I was out of luck. For four seasons, I stuck with the show. Through the good times and the many bad times, I watched it all. And now, since a spinoff series premieres Thursday night, I've put together a one-stop recap of the original Heroes series, so you don't have to sit through a four-season marathon that would last roughly 50 hours.

While the events of Heroes Reborn aren't directly tied to those of Heroes, they are still connected. The big thing to know is that these heroes are just regular people who one day wake up with intense powers. Some can fly, some can alter time and space, and one little kid can talk to computers. The heroes are known as "evos," which is short for "evolved humans." The evos are perfectly fine and harmless (as long as they don't use their powers for evil), but a mysterious organization known as "The Company" is tasked with finding and tracking them. That was the basic premise sustaining Heroes throughout its run, and here are the other details you should know before delving into Heroes Reborn when it premieres on NBC at 8 p.m.

The very beginning. This is where everything is set up, so it's a whole lot of backstory about every single character. The important ones to note are:

The plot of the season revolves around a premonition: there's going to be a huge explosion in New York City. Peter believes that he is the reason behind this explosion, and tries to figure out what to do with this information.

Another huge piece of information revealed in Season 1 is that Claire is not HRG's biological daughter, but instead the daughter of Nathan and a woman named Meredith Gordon, who is pyrokenetic. The Company actually took Claire as a young baby, but HRG felt a bond with the little girl, and kept her as his own, hiding her away from The Company, which we also learn is run by Hiro's dad, Kaito.

The end of the season shows everything come to a head, with mostly all of the evos in New York City. Matt and HRG (who turns "good" by the end of the season) are trying to disarm The Company's evo tracking system (so they can all live in peace), while Nikki/Jessica, Peter, and Hiro all try to stop Sylar. Peter learns that he actually is the explosion, so his high-flying brother takes him up into the air where he won't harm anyone. Hooray! The day is saved!

Season 2 was ridiculously short with only 11 episodes. Why? Maybe you remember the dark time of television, also known as the Writer's Strike. Television literally stopped, which meant Heroes had to stop too, and the series was left with a super-short season and so many unanswered (and strange) questions. You could say this started the beginning of the end.

There's are a few brand new evos, Molly (who was actually the evo tracking system for The Company, since she can see the locations of evos — like Professor X's Cerebro in X-Men), and twins Maya and Alejandro, who keep accidentally killing people.

As for everyone else, the seasons opens with Hiro in 1671 Japan, because of course he accidentally traveled back in time. It takes him seven episodes to get back to present time. Once he does, he realizes that one of the warriors he met in Japan, Kensei, can regenerate and is still alive present day, calling himself Adam. Adam kills Hiro's dad, Kaito.

Also, Peter is in Ireland (because of course he's in Ireland) with a bad case of amnesia. It takes him six episodes to sort of figure out some stuff about himself, and then he accidentally teleports himself (and his new lady friend) a year into the future were everyone is dying from a mysterious Shanti Virus. Then, we learn that Peter actually aked for his memory to be erased, though he doesn't get it back until Episode 8 of the season — just letting you know how many episodes there were before Peter got his act together.

In the end, it's Kensei/Adam who wants to to release the Shanti Virus and wipe out most of the population. To stop him, Hiro transports him into a buried coffin, where he's stuck for all of eternity.

Sylar, meanwhile, is very much alive. He's trying to better himself, and teams up with new evo Maya, after killing her brother. But it's hard for him to stay good, and he keeps accidentally causing destruction and death.

At the end of the season, Nathan wants to go public with his powers (and he's still got political aspirations), but as he's giving his press conference, he's shot.

Can Heroes get weirder? Yes, it can.

It was Peter who shot Nathan, but Peter from the future, who came back in time to do this. This season contains a ton of time travel, and much of it is frivolous.

This season introduced a formula that can give regular people evo abilities, and it absolutely cannot get into the hands of the public. There's also a huge villains breakout at The Company, and soon, they're running wild. Sylar, who's trying really hard to be good now, has teamed up with HRG to try and track these villains down.

Meanwhile, Mohinder has also created a formula to give people powers, and tries it out on himself. Guess what? He gets powers, though they make him filled with rage, similar to the Hulk.

Also introduced in Season 3 is Arthur Petrelli (dad of Peter and Nathan), who has been locked away and hidden since he's a villain — and he wants to release the a bad evo formula to the public. He's also an evo who absorbs the powers of other evos, and though that's similar to Peter's own abilities, it differs in that Arthur takes the other evo's power away from them. Through more time travel (going back 16 years, to be exact), Clarie and Hiro sort of stop Arthur, but not really, because he still manages to make it back to present day, where it's Sylar who kills him once and for all.

The second part of the season focuses on the evos trying to rebuild their lives. Also Nathan is now evil, as he's trying to hunt down and capture everyone with powers. And also, Sylar is trying to find his father. OH AND ALSO, someone from homeland security is trying to capture the evos. And let's not forget that Sylar can now shapeshift, and is trying to get himself close to the President, so he can become the President, and slowly start ruling the world. Before this can happen, though, Sylar kills Nathan. Mrs. Petrelli decides that Matt should alter Sylar's mind to make him believe that he is Nathan — and keep Sylar shapeshifted as Nathan — because why not?

But, in a roundabout way, Sylar has been defeated. Since he's now Nathan. Just go with it.

Still here? Then you should know that Heroes didn't realize Season 4 would be its last, so it didn't exactly tie things up with a neat little bow.

Everyone is trying to move forward — again. Claire has even enrolled in college. Things are slowly starting to get back to normal, except that Matt, having taken over Sylar's mind for a little bit with that whole Nathan thing, is now hearing Sylar's thoughts. This Nathan-Sylar is fighting his internal demons, literally, and eventually begs Peter to let him die, so he doesn't have to live in the mind of one person and the body of another.

There's also a brand new plot about a guy named Samuel and his traveling circus of "Sullivan Bros. Carnival." He has Terrakinesis, which is the ability to manipulate the Earth, and his grand plan is to kill lots of people in Central Park during one of his carnival shows, as his introduction to the world as all-powerful. Thankfully, he's stopped.

The very end of the series finale sets up for what would have been the fifth season. Claire decides to admit to the world that these evos exist, and climbs to the top of a ferris wheel to throw herself off of it, demonstrating her powers.

When Heroes Reborn picks up, we know that the evos did come out the public, but have since drifted back into the shadows again. So, will anything from Seasons 1 through 4 come back in to play, besides a few returning characters? We'll find out soon enough when the new series premieres and adds even more to this already long, complex mythology.

More like this
Everything You Need To Remember Before ‘The Handmaid’s Tale’ Season 5
By Grace Wehniainen
Nicola Coughlan Shared A Lady Whistledown Excerpt From ‘Bridgerton’ Season 3
By Grace Wehniainen, Alyssa Lapid and Sam Ramsden
Everything To Know About 'The Last Of Us' TV Adaptation
By Sophie McEvoy and Radhika Menon
A New 'And Just Like That' Table Read Pic Confirms A Key Character's Return
By Jack Irvin and Grace Wehniainen
Get Even More From Bustle — Sign Up For The Newsletter