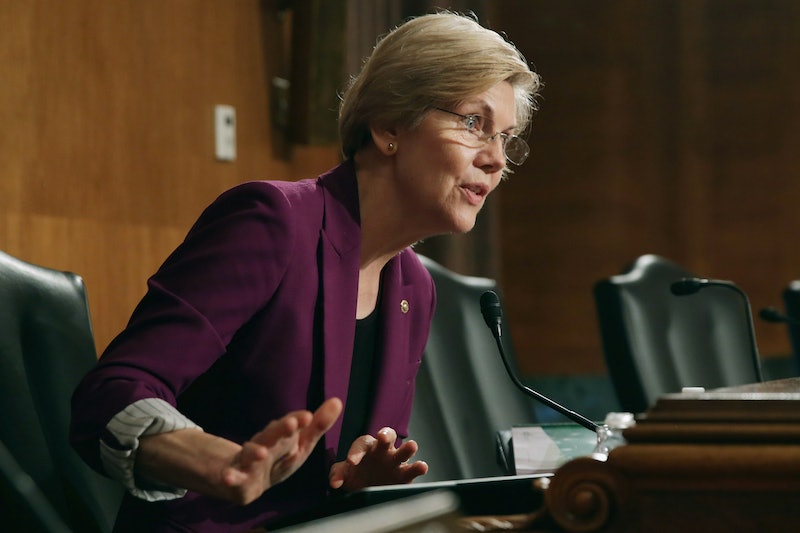 While the world was wondering whether or not she would run for president, Elizabeth Warren was busy fighting for women's rights in her own quiet, fierce way. Warren, the female senator from Massachusetts who has become a Democratic favorite, is known for her passionate stances on women's issues and dedication to protecting equality. Part of Warren's appeal is her straight-forward, no nonsense approach to the issues. She's able to argue eloquently — but also isn't afraid to just tell people when they're wrong.

Regrettably for some, Warren isn't running for president, despite many attempts to change her mind. But that's okay, because the senator has plenty of other things to occupy her time. Like continuing her mission to protect consumers, empower women, and act as a progressive foil in the senate.

This past year has been pretty busy for her, especially this summer, with constant Republican efforts to defund Planned Parenthood — an organization that she staunchly defends. Although she may not make headlines each day, she actually does a lot behind the scenes to protect and further women's rights. In case you've missed some of Warner's best feminist moments this year, I've put together a highlight of some of her fiercest efforts to protect our rights.

1. When She Empowered Women At The Know Your Value Event

In April, Warren served as the keynote speaker at the Know Your Value conference, an event dedicated to empowering and elevating women. Her speech focused on believing that women can build a better America — it's available to watch in its entirety on MSNBC.

2. When She Tried To Help Pass The Equal Rights Amendment

Unsurprisingly, Warren was one of several senators who lent her name to a joint resolution effort in May to pass the Equal Rights Amendment, a goal that has been pursued by feminists for more than 90 years. Unfortunately, Warren and her fellow senators were unsuccessful. If passed, it would be the first time that gender is acknowledged and equally protected in the U.S. Constitution.

3. When She Introduced The Schedules That Work Act

Warren helped introduce a bill that would seek to provide stability for low-income workers who currently have jobs where their hours can be cut or added upon at a moment's notice. This is something that especially affects women who work while providing for children. If passed, the bill could help provide stability for working mothers, as well as thousands of other hourly employees.

4. When She Shared Her Amazing, Trailblazing Love Story

In July, Warren shared an adorable post about her husband, and dropped the big feminist bomb that she proposed to him. And she was totally chill about it. Warren has always been way before her time, but sharing this personal anecdote helps normalize set an example of equalizing gender roles and relationships, as well as showing women that it's okay to be "aggressive."

5. When She Took The GOP To Task Over Planned Parenthood

On Aug. 4, right before this year's first vote to defund Planned Parenthood (which failed), Warren delivered the speech of the century in defense of the women's health organization.

Do you have any idea what year it is? Did you fall down, hit your head, and think you woke up in the 1950s or the 1890s? Should we call for a doctor? Because I simply cannot believe that in the year 2015, the United States Senate would be spending its time trying to defund women's health care centers.

6. When She Literally Told Ted Cruz To Fight Her Over Planned Parenthood

7. When She Opposed A 20-Week Abortion Bill Proposed By The GOP

On Sept. 21, Warren spoke out against a proposed ban that would restrict abortions performed at 20 weeks. She wasn't a fan of the bill, or the party that supported it. "This horrifying bill that we'll vote on tomorrow is just one more piece of a deliberate, orchestrated, right-wing plan to attack women's heath and reproductive rights," Warren said. The bill did not pass.

Warren's dedication to providing opportunities to women and the middle class is what makes her a household name among progressives. And her unrelenting efforts to promoting and elevating women are what make her an ultimate feminist politician.