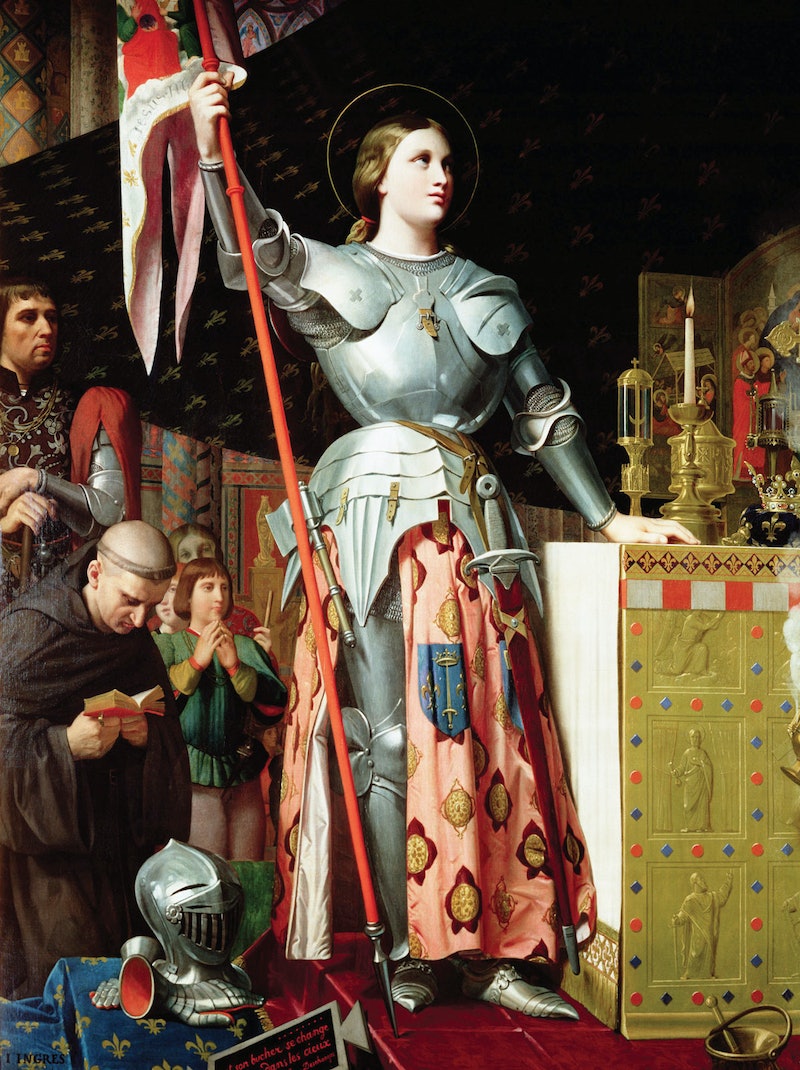 Wouldn't it be great if, in 2015, there was finally an end to gender discrimination and inequality? Can you imagine a world where young girls could go to school, choose their own career paths, and make names for themselves in this world? We've still got a while to go before reaching gender equality in America and abroad, but that hasn't stopped strong women (and men) from fighting the good fight. But what about women from back in the day who had trouble being heard for the sheer fact that they were women? Plenty of strong women in history pretended to be men because frankly there just weren't many options and they wanted to, well, get shit done.

Women posing as men isn't a new concept. It's a classic Shakespearean trope that's manifested itself plenty of times in real life. Unfortunately, though, it's still a relevant topic today. After last week's debate among Republican presidential hopefuls, satire site The Onion published an article proclaiming the GOP had promoted Carly Fiorina to "male candidate" after she did well in the debate. The joke was spot-on — even today, women have to be characterized as male to be taken seriously in their professional lives. Fiorina is far from the first woman to experience an uphill struggle in a male-dominated industry, and these badass women throughout history didn't let their society's limits on their sex stop them from achieving their goals.

The 19th-century English novelist and author of Jane Eyre used a more gender-neutral pen name, Currer Bell, when publishing her first works, including originally publishing Jane Eyre under the male name. Brontë's sisters Emily and Anne used the same tactic — using Ellis and Acton, respectively — and the three published a joint collection of poems under their male pseudonyms. Brontë later wrote that the trio had purposely chosen names that were "positively masculine," because female writers were "liable to be looked on with prejudice." The Brontë sisters wanted their writing to be given its fair due by critics and readers — even if that meant writing under false names.

The story of a woman disguising herself as a man to go to war extends further than the legend of Mulan. Elisa Bernerström disguised herself as a man so she could serve as a soldier for the Swedish army in the Finnish War between Sweden and Russia in 1808 and 1809. (Women weren't allowed in the Swedish military until the 20th century.) Bernerström's husband, a soldier named Bernard Servenius, was stationed in Stockholm, and Bernerström disguised herself so that she could stay with her husband, even if that meant enlisting in the army. Bernerström's gender was eventually discovered — it was hard to keep her true identity a secret at war, especially when she was a member of the queen's regiment — but she was still commended for her bravery in battle.

In 1959, Rena Kanokogi disguised herself as a man to enter a YMCA judo tournament in New York. Kanokogi won the event, but she was forced to return her medal when the officials figured out she was a woman. Kanokogi didn't give up on her judo dreams, though. She traveled to Japan to continue her training, and she became the first woman to train with the men at the Kodokan Institute in Tokyo. Kanokogi went on to found the world's first female judo world championship, held in the Felt Forum at Madison Square Garden.

Malinda Blalock disguised herself as a male in order to fight in the American Civil War. Her husband, Keith, had joined the 26th North Carolina Regiment, and she decided to follow him to help in the fight, enlisting under the name Samuel Blalock in 1862. The couple eventually deserted the army in order to become scouts for the Union army.

Norah Vincent, a journalist, went undercover as a man for 18 months, calling herself "Ned Vincent." Vincent wanted to uncover whether or not she would be treated differently if people thought she was a man. Vincent committed herself to the assignment, too — she took voice lessons to speak like a man, and she wore a jock strap with padding to make the look more realistic. Vincent joined a bowling league as Ned, befriending men to see what they talked about when women weren't around. Vincent was often surprised at the men's conversations, though. She told 20/20's JuJu Chang the men on the bowling team "really showed me up as being the one who was really judgmental," saying they befriended her (as Ned) with "no judgments attached."

Kathrine Switzer signed up for the Boston Marathon under the name K. V. Switzer in 1967 because women weren't allowed to compete in the race at the time. Not long after Switzer participated in the event, officials removed the ban on women running the marathon. In addition to making history for female runners, Switzer also set an impressive personal record — she won the New York City Marathon in 1974.

The 8th-century Marina disguised herself as a boy so she could accompany her father to a monastery because women weren't allowed inside. Marina did a lot more than just watch her father there, though. She became a monk herself, using the name Marinus. After several years at the monastery, Marina was traveling with her father when an innkeeper's daughter falsely claimed Marinus had impregnated her. But instead of revealing the truth, Marina raised the child herself after being kicked out of the monastery. Her true identity remained a secret until her death.

Though J.K. Rowling has one of the most recognizable names in the world now, she originally chose her pen name so that her gender would be less obvious. Rowling's publicist wanted Harry Potter's target audience to consist primarily of young men, so she used initials rather than her full name, Joanne Rowling, to publish the series.

Mary Ann Evans, a 19th-century author who didn't want her work's reception clouded by gender stereotypes, chose to publish her six novels, including Middlemarch, under the pen name George Eliot.

Like Blalock, Sarah Edmonds disguised herself as a man to join the American Civil War. Edmonds, who was born in Canada, served as a member of the Union army as a male field nurse as well as a spy. After the war was over, Edmonds became a nurse at a soldiers' hospital in Washington, D.C., where she no longer needed to hide her female identity.

15th-century Joan claimed she heard the "voices" of various saints telling her to lead the French army. She fought during the Hundred Years' War while disguised as a man. Though she died when she was only 19, Joan of Arc is remembered for her heroic efforts to fight for France, and she is respected by both Catholics and non-Catholics alike.

These women definitely prove that you can accomplish anything you set your mind to, even in adverse circumstances. While it's great that male disguises helped them achieve their goals, let's hope that in the future, women can be respected on their own, without having to pose as men to gain respect.