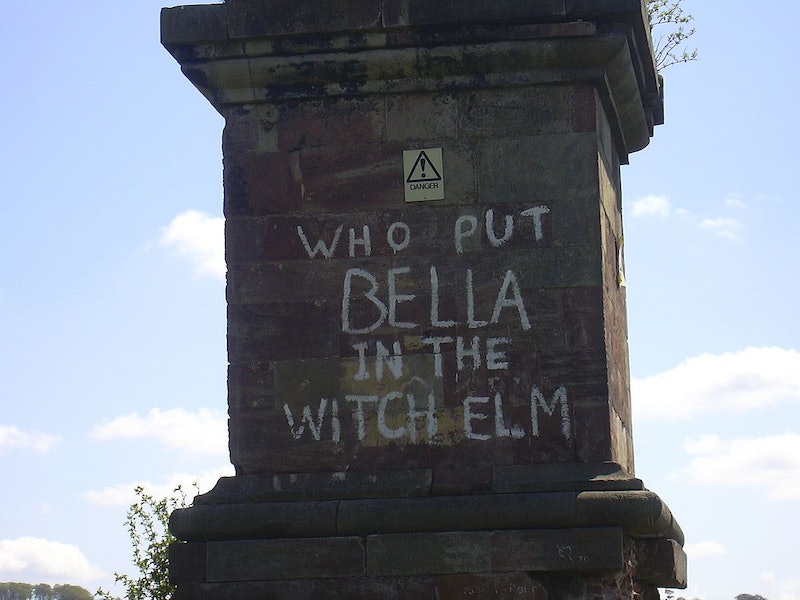 My admittedly bizarre interest in the strange and unusual has been well documented both on Bustle and elsewhere, so the topic of today's piece of weirdness probably won't surprise many of you: We're taking a look at six of the creepiest unsolved crimes in history. Morbid? Perhaps. Fascinating? Undoubtedly. Seasonally appropriate? Yep. Edifying? Certainly. So step right up — you might just learn a thing or two.

You're probably familiar with the claim that the first 48 hours are the most important when it comes to solving a violent crime. The evidence is still fresh; missing people are more likely to be found; witnesses are more likely to remember things they recently heard or saw; and so on. But if the national clearance rate for, say, homicide — that is, the number of homicides in which police are able to make an arrest or identify a suspect — was only 64 percent in 2013... well, you can imagine how dramatically that figure might drop for cases that are years, decades, or even centuries old, both due to the time that's passed and the technology that was available during the eras in which the crimes originally took place.

It's so unlikely that any of these six crimes, one of which dates back to the 16th century, will ever be solved that the figure may as well be zero. But the mysteries still continue to fascinate us, possibly because we'll probably never know the truth. It's maddening — and yet we can't look away.

Here are six unsolved crimes and mysteries I keep coming back to again and again. They're all 100 percent real — and 100 percent creepy.

On April 18, 1943, four boys looking for bird's nests in Hagley Wood in Worcestershire, England found a human skull nestled in the hollow trunk of an elm tree. Police later recovered more of the skeleton from the tree trunk, along with finger bones and clothing remnants from around the base of the tree. The remains were determined to have belonged to a woman; a scrap of taffeta lodged in her mouth suggested that she had been asphyxiated.

No one knew who she was, and after six months with no breakthroughs, graffiti began to appear across the region — graffiti that asked one question: “Who put Bella in the Wych elm?”

One of the working theories right now is that “Bella” may have been German cabaret singer and actress Clara Bauerle, believed to have been a spy during the Second World War. MI5 records of the interrogation of Gestapo agent Josef Jakobs suggest that Bauerle was scheduled to parachute into the Midlands in 1941. Jakobs said that Bauerle never made radio contact. That doesn't necessarily mean that she did end up in the trunk of an elm tree by unknown means or at the hands of an unknown person... but it's possible. Anything is possible.

The theory remains just that — a theory — although it does suggest an interesting explanation for the name “Bella”: English audiences may well have remembered “Clara Bauerle” as “Clarabella” — or simply “Bella” for short.

The mystery of who committed the murders and why has never been solved.

The Gruber family had a… shall we say, complicated history, but it's unknown whether any of it was related to their deaths. No money or valuables had been stolen, either, which meant that robbery was out as a motive. But the two absolute weirdest bits of the whole thing are these: One, the murders themselves happened on March 31. Evidence found around the property as well as neighbor reports describing smoke billowing from the house's chimney in the first few days of April suggest that whoever committed the crime stayed on the property for days afterward, feeding the livestock, eating what was in the larder, and sleeping in the Gruber's house.

And two: The maid, Maria Baumgarten? March 31 was her first day on the job. The previous maid had quit because she believed the farm was haunted; Andreas Gruber had also describe to neighbors spotting mysterious footsteps leading from the forest to the farm (but with no return footsteps to match them) and objects disappearing and reappearing in odd places.

This suggests that whoever killed the Grubers had been living on their farm for months before it happened.

3. The Disappearance of the Roanoke Colony

I'll admit that I'm not totally sure whether this one qualifies as a crime, per se — but it's certainly bizarre and unsolved, so let's take a look at it anyway. You may have learned something about it in history class at school, although I'm willing to bet that you didn't spend a whole lot of time on it.

In 1585, an English colony was established at Roanoke Island near what is North Carolina today. That colony failed, and a second was established in 1587 — and here's where it gets weird: Governor John White, who had been a member of the 1585 colony, left the second colony in August of 1587 to bring back more supplies from England. The Anglo-Spanish War prevented White from returning for a whopping three years (trans-continental boat trips are neither fast nor simple, especially when all your ships are out making war), but he was finally able to set sail again in 1590. When he arrived back at the Roanoke colony on August 18 of that year, however… it was gone.

There was no sign of a fight or a battle, but all the houses had been dismantled, and the 90 men, 17 women, and 11 children who had called Roanoke home had vanished. The word “CROATOAN” had been carved into a fence post that remained… but that was the only clue White found.

Theories abound, of course. Some believe the settlers integrated with local tribes (the word “CROATOAN” pointing to a possible connection with the Powhatans); others that the Spanish destroyed the colony; and so on and so forth. But exactly where the colonists went remains a mystery — and one that we'll likely never solve.

Also known as the Taman Shud case, the Somerton Man is the name given to a John Doe who was found dead the morning of Dec. 1, 1948 on Somerton Beach in Adelaide, South Australia. He was in his early 40s and well dressed, although his clothes were missing all the labels and he had no wallet. No one has ever figured how he died, or why. Neither his dental records nor his fingerprints were of any help in the case; his teeth didn't match the records of anyone in Australia, and his fingerprints didn't match anyone in the English-speaking world at all. No one has been able to identify him. We don't know where he was from. We don't even know if he committed suicide, if he was murdered, or if he just died of natural causes.

And we probably never will.

We do know that he deposited a suitcase in the cloakroom of Adelaide's main railway station on November 30 — the day before he was discovered — thanks to the presence of a thread card for a particular brand of thread not commonly found in Australia. The same thread had been used to fix a pocket in the Somerton Man's trouser — hence the likely correct assumption that the suitcase was his. Clothing found in the suitcase was labeled “Kean” or “T. Keane,” although the police eventually came to believe that the names had been left there to mislead them.

The “Taman Shud” moniker didn't get attached to the case until April of 1949, when a reexamination of the Somerton Man's body and possessions turned up a scrap of paper hidden in a previously undiscovered pocket. The words “Tamam Shud” — a quotation from The Rubaiyat of Omar Khayyam that means “It is ended” — were written on the paper; however, local newspapers misreported the phrases as being “Taman Shud,” a name which unfortunately stuck.

Professor Derek Abbott, one of the world's leading experts on the Somerton Man case, did an AMA on Reddit's r/UnresolvedMystery sub about a year ago; amazingly Professor Abbott continued to answer questions in it for a full six months afterwards, prompting the creation of a new thread for ongoing discussion. Check it out — it's fascinating and weird and one heck of a rabbit hole to fall down.

All of these unsolved crimes and mysteries are sad, but I think this one is probably the saddest: On Jan. 26, 1966, 9-year-old Jane, 7-year-old Arnna, and 4-year-old Grant Beaumont took a five-minute bus ride from their home to Glenelg Beach in Adelaide, South Australia.

They never arrived home, and have been missing ever since.

We know a little about the Beaumont children's movements that day — they were seen on the bus at 10:10 a.m., and they bought some pastries at a cake shop at around 11:45 a.m. — but they disappear from record sometime in the afternoon. The timeline is hazy; they may have been seen by the postman at 1:45 p.m., or possibly at 2:55 p.m., but he was unable to remember whether he had seen them at the beginning or end of his route. Most mysterious, though, is this: Several people reported seeing the children in the company of a blond-haired man in blue swimming trunks. However, who he might have been and whether he may have abducted the children has never been determined.

Interesting to note: At the time of the children's disappearance, the Beaumont family lived in Somerton Park… where the Somerton Man had appeared not quite 20 years earlier. It's likely a coincidence… but it's still a little spooky.

6. Who Exactly Was Kaspar Hauser?

The story of Kaspar Hauser is notable for two reasons: One, his strange arrival; and two, his inexplicable death. Known as the Boy from the Forest, Kaspar wandered into a public square in Nuremberg on May 26, 1828, wearing tattered clothing and unable to say anything than his own name. He carried two letters, one seemingly from his mother to his previous caretaker identifying him as the son of a dead cavalryman, and the other from that caretaker — a poor laborer — addressed to Captain von Wessnig explaining that Kaspar wanted to be a cavalryman like his father.

Kaspar looked like he was 16 or 17, but he behaved like a small child. No one really knew what to do with him, so he was imprisoned as a vagabond — but some good did come out of the experience: His jailer's children took a liking to Kaspar, teaching him how to draw, write, and speak. When he had enough language, he began describing his life: He said he had lived his entire life in a dark room only two meters long, one meter wide, and one and a half meters high. He had one toy — a carved horse — and was fed only bread and water. The food appeared next to his bed, but he never saw who brought it; indeed, he had no contact with other humans and was unaware that a world existed beyond the walls of his room until he was released. In the days prior to his release, he met another person for the first time — a man who hid his face and taught him to say his name, to stand, and to walk. Then he arrived at Nuremberg.

But just as the mystery of Kaspar's origins were never uncovered, neither has the mystery of his demise been solved. He continually reported attacks by unknown persons against him in the years that followed, although it's been questioned whether they were assassination attempts or the results of self-harm. Then, on Dec. 14, 1833, he arrived at the home of his guardian, schoolmaster Johann Meyer, bleeding from a vicious chest wound. He said, brokenly, “Went to the Hofgarten — man had knife — gave me purse — stabbed — ran as fast as I could — purse still there.” The purse was recovered, but the man was never found, and Kaspar died of his wounds several days later.

We'll probably never know who Kaspar Hauser really was, or who killed him, or why — but we love to theorize about it. It's probably why there are so many pieces of art that tell his story.