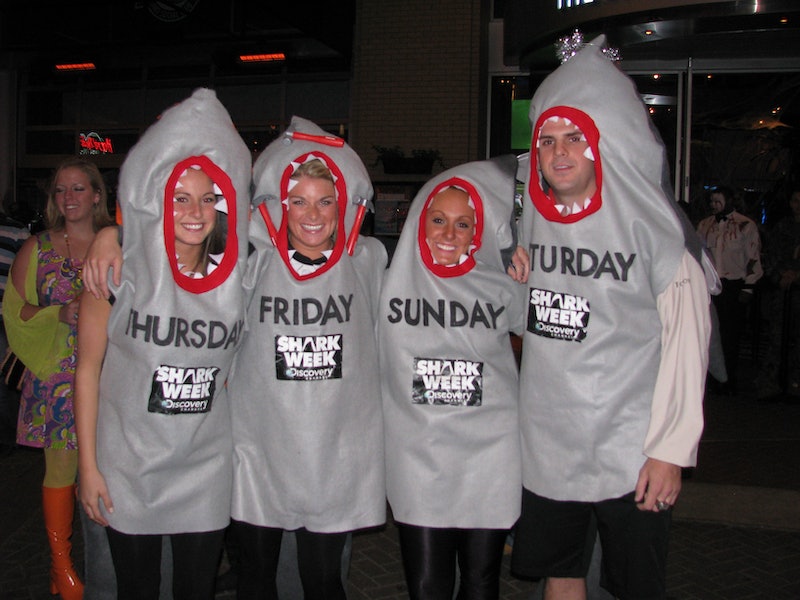 The only thing more awe-inspiring on Halloween than a truly punny costume is funny group Halloween costumes. The Internet is crawling with great ideas to copy or adapt for your squad this Halloween. For those of us who treat Instagram as a friendly competition and the last acceptable outlet for showing off how much wittier our Halloween outfits are than everybody else, having a cute, creative, and easily-explainable costume is key.

One foolproof way to become everyone's #SquadGoals this Oct. 31 is to put together a set of costumes that suggests you don't take yourselves (or Halloween) too seriously, that you're all painfully clever, and you've harnessed the power of being funny while looking amazing. Additionally, if you've already graduated from college and you're not 2010-era Gaga, you don't get that many opportunities to dress up like a lunatic in public, so live it up.

So, how will you and your pals become the envy of Instagram for Halloween 2015? Here are some hilarious group costumes to use as inspiration. From the topical pop culture jokes to plays on words and even some throwback references, these group costumes are among the best the Internet has to offer. Now all you have to do is join their ranks to inspire someone else next year.

Get it? The *SPICE* Girls! This group costume works for groups of just about any size, so round up your most flavorful friends, and become sporty cayenne, posh paprika, and more.

Channel the comments section of your favorite YouTube channel and the pointy-haired, wish-granting dolls from the '90s with this group costume dedicated to the scourge of the Internet — Internet trolls. With this costume, your crew can turn off any and all social filters, and disrupt your friends' conversations with loud, non sequitur comments about teen heartthrobs and how lame everyone's costumes are.

Everyone's favorite weeklong event is Discovery Channel's annual celebration of the ocean's biggest bully — Shark Week! You and six friends can easily dress up as days of the week, as they would appear mid-shark attack.

This Wizard of Oz group costume with a twist has so much potential. With just one quick trip to Uniqlo, you can put together a solid look that mimics the outfits of Dorothy and her friends with a perfectly hipster twist. My boyfriend and I actually did this last year, and I brought a six-pack of craft beer in my Dorothy-basket instead of a dog.

Embrace the true meaning of Halloween by dressing in this very shareable group costume. Each person chooses an app to represent, and rocks some butterfly wings to become a flutter of social butterflies.

Expecting haters? Shake them off with this group costume inspired by Taylor Swift's music video! Everyone can choose their favorite dance sequence, and dress like the dancers in the video.

Half wizard, half football star! Draft your besties to your fantasy football team, and win Halloween.

You could go as a minion by yourself, but isn't it way more fun to pull this off as a group?

If you've ever known anyone who went to the Burning Man festival, you've probably seen some pretty ridiculous photos of people dressed as something akin to Mad Max meets Skrillex on the surface of Mars with steampunk goggles and 15 statement necklaces at once. Basically, empty out your costume drawer (let's be honest, you have one), and wear literally everything (except for pants).

Everyone's favorite apathetic '80s teen film gets a very literal interpretation when you and your friends dress as boxes of cereal.

The sky is the limit with this group costume. Create black and white cards with inappropriate and hilarious phrases on them, making sure there's plenty of opportunities for mixing and matching. You can also include loads of inside jokes if you're going to a party with more friends who aren't a part of this costume.

If your group isn't into the idea of wearing prison jumpers, you can still celebrate your fave feminist Netflix series. Just slip into a little orange dress, and watch with amazement as everyone at the bar figures out how witty you are.

This play on words will take you far when you combine the face paint of classic rock band KISS with the uniform of a Parisian mime. Find three friends to rock this look for maximum effectiveness.

Dress your girl group as a parliament of owls (yes, that's actually the name for a group of owls) to achieve a punny "hooters" girls costume.

16. The Spirits Of The Night

All Hallows' Eve is all about spooky spirits, and what better spirits to embody than the distilled liquor kind!?

When we were kids, we got trophies for being alive and participating in any kind of extra-curricular activity. Relive the magic by dressing as the bountiful trophy collections we all amassed as children.

So, traditionally, the three "wise" monkeys covering parts of their head are supposed to symbolize "see no evil, hear no evil, speak no evil," but it is widely understood in millennial emoji-speak that those monkeys are embarrassed, not listening, and shocked, respectively.

You and your crew can literally put on your game faces this Halloween.

With this costume, you can tell everyone you're going in underwear. They'll be shocked and amused when your crew rolls up dressed as the giant fruit mascots from Fruit of the Loom.

More like this
13 Gifts From Latina-Owned Businesses For Everyone On Your List
By Marilyn La Jeunesse
69 Great Gifts For Guys No Matter What Their Hobbies Are
By Teresa Newsome, Mia Mercado and Brittany Leitner
7 Joyful Alternatives To A Traditional Holiday Celebration
By Jessica Goodman
21 Absolutely Adorable Christmas Gifts For Dogs
By Carolyn Steber
Get Even More From Bustle — Sign Up For The Newsletter