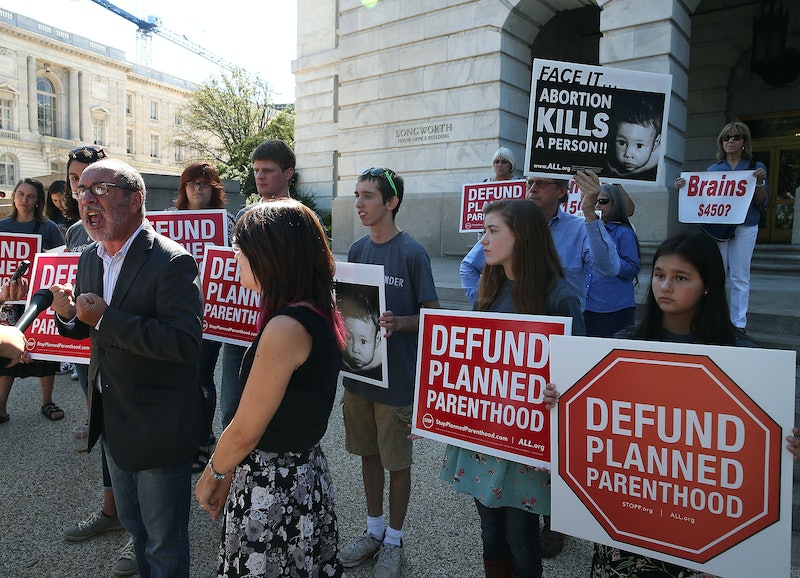 During a vote Thursday, Senate Democrats blocked the latest effort to defund Planned Parenthood — but it required striking down a bill that would continue funding the government. The bill, which included a provision to defund the women's health organization for one year, was included on a piece of legislation that would keep the government open and funded through Dec. 11. The deadline for funding is fast approaching, and a compromise must be made by Oct. 1. So, are we heading for another government shutdown?

It seems unlikely. The funding bill, which was passed by the House of Representatives last week, was never a true threat to Planned Parenthood. In order to pass the Senate, the bill needed 60 votes, and the 52-47 vote Thursday failed to produce such a result. But according to CNN, Republican leaders never expected it to pass. Instead, it was part of a larger effort by Senate Majority Leader Mitch McConnell to prove to the Republican base — as well as some in the House — that the party lacked the votes and ability to pass such a provision in the Senate. In turn, this would hopefully allow Congress to pass a bipartisan funding bill, free of provisions, that would keep the government open.

And that's exactly what McConnell plans to do. On Thursday, he introduced a stop-gap bill which will fund the government through December, and which includes Planned Parenthood funding. It's expected to pass on Monday with bipartisan support before going to the House. But that's where things may get tricky. Despite party leaders' unwillingness to threaten a shutdown, some Republican representatives aren't on board with a budget that continues funding Planned Parenthood. South Carolina's Mick Mulvaney, for example, has vowed to oppose any funding bill without a defunding provision.

Which is where Speaker of the House John Boehner enters the picture. In an effort to get Republicans to play ball, Boehner is expected to introduce legislature unrelated to government funding that will strip Planned Parenthood of federal funds. According to The Washington Post, Boehner is expected to put the initiative through reconciliation — a process that cannot be filibustered in the Senate, and only needs a majority of votes to be passed.

Although the reconciliation process might increase the possibility of defunding legislation passing, separating the Planned Parenthood provision from the budget bill will likely help ensure that federal agencies stay open. However, for supporters of the women's health organization, it's not quite time to start worrying yet. The process of passing defunding legislation is part of a larger Republican effort to force President Obama to take a stance on the abortion issue. And Obama has already vowed to veto any defunding legislation that crosses his desk. If Obama vetoes any potential bills, it will be proof of what many Republicans are already saying: Defunding efforts are futile as long as a Democrat is in the Oval Office.

Despite the fact that the House tends to be somewhat unpredictable, a government shutdown looks unlikely at this point. Planned Parenthood funding will likely be safe. For now.