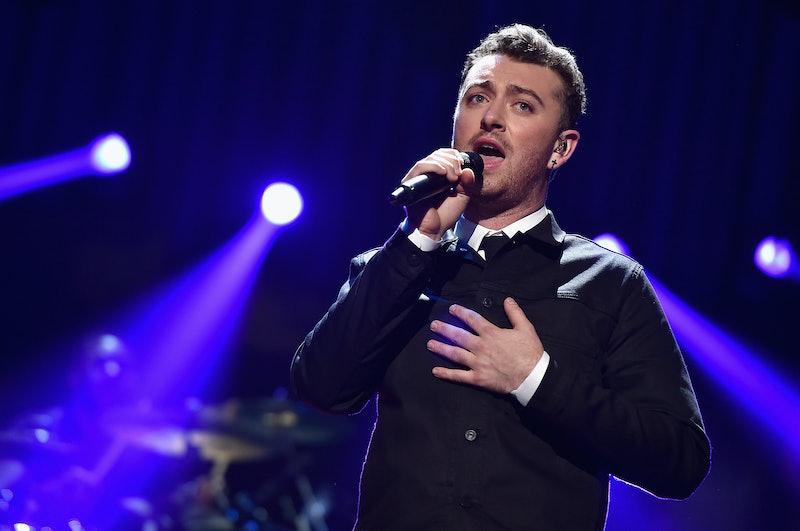 It's here, it's here, it's finally here! Whether you're just a fan of Sam Smith, just a fan of James Bond, or one of those wonderful people who are fans of both, there's something for everyone now that Smith has released his James Bond theme song "Writing's On The Wall." The singer gave us a taste of the upcoming song when he released a snippet from it on Monday, but now the full song has debuted on the Internet, and, guys, it is totally worthy of the franchise. The sweeping, mysterious music that opens the track before Smith even adds his vocals — those high notes! — to the anthem is gorgeous, and let's just say that I understand why Smith claimed "Writing's On The Wall" is "one of the highlights of [his] career."

"I've been here before," Smith opens the song. "But always hit the floor. I've spent a lifetime running, and I always get away. But with you I'm feeling something that makes me want to stay." But that's just the first verse. The second verse, and chorus of the song, really get into the nitty gritty of what Spectre is about, taking this from just any given love song to a vocal tale of danger and intrigue:

I'm prepared for this. I never shoot to miss. But I feel like a storm is coming. If I'm going to make it through the day, Then there's no more use in running. It's just something I've got to face. If I risk it all, could you break my fall? How do I live? How do I breathe? When you're not here, I'm suffocating. I want to feel love Run through my blood. Tell me, is this where I give it all up? For you, I have to risk it all. 'Cause the writing's on the wall.

I mean, if there's anyone around here who never shoots to miss, it would be the agent with the license to kill aka Bond himself. And there is no greater storm that Bond has ever faced than SPECTRE, the organization about to start popping out of every field like dandelions trying to choke all the flowers to death. (See what I did there?) Of course, the danger and intrigue doesn't stop there. The final verse before Smith moves on to repeating the chorus at various tempos states:

A million shards of glassThat haunt me from my past. As the stars begin to gather,And the light begins to fade,When all hope begins to shatter,Know that I won't be afraid.

So, basically, Bond is facing his toughest challenge yet, one that he doubts that he will survive, but he plans to face it with his head held high and his suit neatly pressed. If you've seen any single one of the trailers for Spectre, then you know exactly how accurate that is.

And especially when combined with the synopsis of the movie, the song is enough to make the goosebumps rise on your arms as you wonder exactly how Bond is going to get himself out of this one. "A cryptic message from the past leads James Bond (Daniel Craig) to Mexico City and Rome, where he meets the beautiful widow (Monica Bellucci) of an infamous criminal. After infiltrating a secret meeting, 007 uncovers the existence of the sinister organization SPECTRE. Needing the help of the daughter of an old nemesis, he embarks on a mission to find her. As Bond ventures toward the heart of SPECTRE, he discovers a chilling connection between himself and the enemy (Christoph Waltz) he seeks."

Yikes. At least we have this elegantly haunting song to keep us company while we wait for this latest death-defying Bond adventure. Listen to the song below.