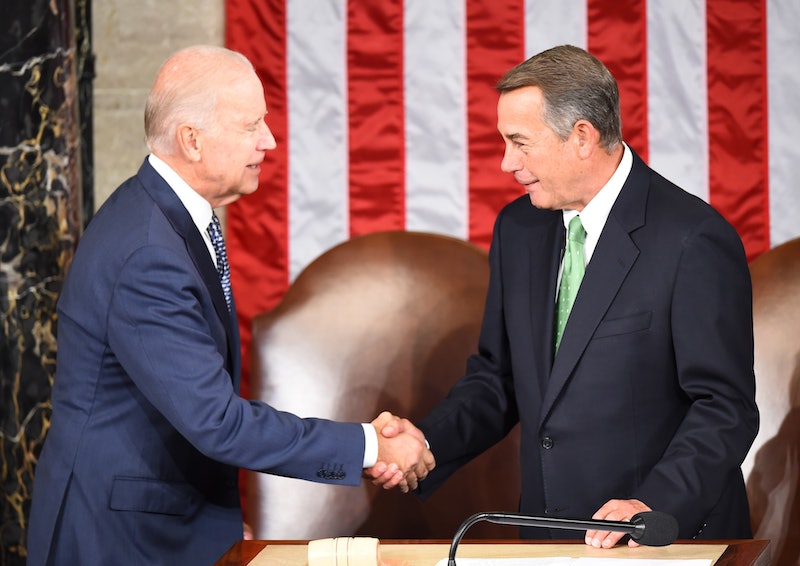 On Friday, The New York Times reported that aides of John Boehner confirmed he'd be resigning from his position of House Speaker at the end of October. That report was later confirmed by Rep. John Mica to assembled reporters. Boehner has held that role since 2011, and before that, was House Minority Speaker. The news came as a shock to many; throughout the Pope's visit this week, Boehner continued work as normal, albeit shedding a tear during the first-ever papal address to Congress on Thursday morning — a display of emotion that many are now connecting to his resignation.

Boehner has served in Congress since 1991 and has been in the same seat — Ohio's eighth congressional district — since then. His timing is curious: The report comes alongside Pope Francis' big U.N. speech, and it's unlikely Boehner would have planned for the news to break at that time. It's possible that he announced the news relatively recently, implying that he hadn't expected to do so. Regardless, the entirely unexpected report has sent shock reverberating around D.C. "It was a surprise to all of us," Rep. Darrell Edward Issa told Roll Call reporter Emma Dumain, according to Twitter.

In a statement, Boehner's office said:

Speaker Boehner believes that the first job of any Speaker is to protect this institution and, as we saw yesterday with the Holy Father, it is the one thing that unites and inspires us all.

The Speaker's plan was to serve only through the end of last year. Leader Cantor's loss in his primary changed that calculation.

The Speaker believes putting members through prolonged leadership turmoil would do irreparable damage to the institution.

He is proud of what this majority has accomplished, and his Speakership, but for the good of the Republican Conference and the institution, he will resign the Speakership and his seat in Congress, effective October 30.