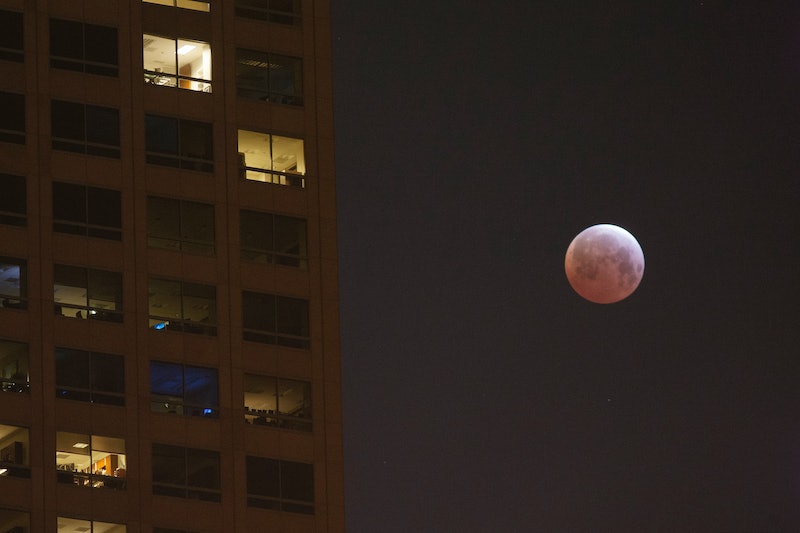 Heads up, everyone — sky-watchers and astronomy enthusiasts across the United States are in for a special treat this weekend. On Sunday, Sept. 27, the full "supermoon" (a full moon that is as close to earth in its orbit as it can possibly be) will eclipsed by Earth's shadow, resulting in a rare lunar phenomena called a "blood moon," which astronomers have stated will be the last until 2033. So, what exactly is a blood supermoon?

According to NASA scientists, there are a couple different types of lunar eclipses, although a full moon is required for all of them. Oftentimes, a full moon will glance the outer edge of earth's shadow, resulting in a "penumbral" eclipse in which the moon is slightly darkened (the last penumbral eclipse was in October 2013). If only a portion of the moon disappears behind Earth's shadow, it results in a partial eclipse, the last of which occurred in April 2013. When a full moon is completely hidden behind the Earth's shadow, or umbra, a total lunar eclipse occurs, usually turning the moon a brown or red color. The last total eclipse occurred in April this year.

The rarest type of eclipse however, a blood supermoon, occurs when the fully eclipsed moon is closest to the Earth in its respective orbit, making it appear 14 percent larger in the night sky than normal. And when that happens, it's truly a sight to behold.

So if the moon is fully hidden, why is it red and not completely blacked out, as one would expect? As NASA explains on its website, although the moon is technically blocked out, a bit of the Sun's light still manages to reach it — albeit through a filter.

"Sunlight has a range of wavelengths, some of which are visible colors, [and] ... during a total lunar eclipse, white sunlight hitting the atmosphere on the sides of the Earth gets absorbed and then radiated out (scattered). Blue-colored light is most affected," says NASA. "What's left over is the orange- and red-colored light. [It then] passes through our atmosphere without getting absorbed and scattered, before the atmosphere bends it (refracts it) back out, projecting indirect, reddish light onto the Moon."

According to NASA, the actual shade of the blood moon is determined by the amount of dust, water, and other particles are floating around in Earth's atmosphere, as well factors such as temperature and humidity. It's the same reason we're graced with beautiful gold, pink, or scarlet sunsets each evening.

The very last blood supermoon to occur happened in 1982 — and the next one won't show up until 2033, explained Brian Murphy, director of Butler University's Holcomb Observatory and Planetarium, in a comment to USA Today. Unlike the previous blood supermoons, this one will crop up at a reasonable hour too, starting at 8:11 p.m. ET and lasting around 72 minutes before it passes out of Earth's shadow. "This one is prime time," he said.

Because it's the moon and not a blinding solar eclipse, you should be able to see it wherever you are without any special viewing glasses or stargazing equipment — you just need to look up.

"It's a beautiful sight in the nighttime sky," said astronomer Mark Hammergren of the Adler Planetarium in Chicago, in a comment to CNN on Friday. "It's a way of connecting us to the universe at large [and] gives us this view that there's a bigger picture than just what we're concerned with in our daily lives."