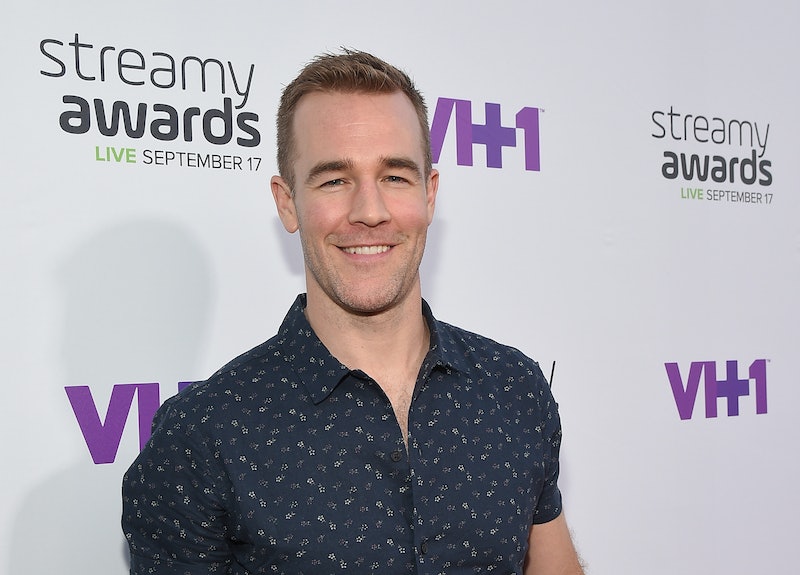 It feels like just yesterday that the WB introduced us to the witty and precocious Dawson Leery and the Capeside gang, getting the of love, friendship, and high school. I felt like I was right there along with them. The series premiered when I was 15, at an age when I was going through my own teenage experiences. Now, I'm a full grown adult human being, and I think it's about time I re-watch the Dawson 's Creek pilot as an adult, because so much has changed since the groundbreaking series premiered in 1998. Back then, there was no The CW, Gossip Girl, or Glee to push the envelope when it came to teen shows. And then came Dawson, Joey, Pacey, and Jen.

Sadly, Dawson's Creek just expired on Netflix, leaving us devout streamers without a way to relive the saga of wannabe filmmaker Dawson and Capeside's finest through out their first kisses, first loves, and first affairs with a teacher (ahem, Pacey). The series was penned by Kevin Williamson, the man who also gave us the Scream trilogy, the Scream TV show, and the recently canceled CBS show Stalker. But oddly enough, Dawson is nothing like those, save for the occasional Halloween episodes.

So, what's an adult's take on the witty teens of Capeside? Let's find out.

"She likes big hair," Dawson says of his news anchor mom. It's like '80s big. And this is how the series begins. With a head of hair that may or may not be full of secrets.

2. Joey's Speech About Not Spending The Night Is Right On Point

Joey gives Dawson a passionate When Harry Met Sally kind of speech about why she can't spend the night in his bed like they've done since they were kids. Because they're 15 now and they've got hormones and genitals (though, they've always had those, haven't they?). Dawson assures her they can stay friends despite their crazy sexual raging hormones and he jokes that she's developing a "thang" for him (which is totally correct). When I was their age, I was in the Dawson camp — what's the big deal? Guys and girls can be friends, yada yada.

But now as an adult, I'm firmly on Joey's side. That's not to say men and women can't be friends — they definitely can be under certain conditions — but sleeping in the same bed together is a hugely intimate thing. And it sends a certain message — at least it does to me. And in a such an intertwined friendship like theirs, jealousy and hormones will take hold once they begin dating other people. I know opinions vary on the subject, but that's where I stand.

3. Dawson & Pacey Used To Work At A Video Rental Store

She walks in, banters with a teenage boy, and asks him for The Graduate. I feel really dirty right now. I mean, he's 15 years old here. Damn, girl.

5. This '90s Soundtrack Is Totally Taking Me Back

The pilot alone includes Sophie B. Hawkins' "As I Lay Me Down," and Chumbawamba's "Tubthumping." I feel like I'm going back to high school.

6. Dawson Is The Perfect Film Student

Dawson makes it very clear in numerous scenes that he wants to be a filmmaker SO BAD! He believes the answers to life lies in Steven Spielberg movies. He has opinions about the Oscars. His room is a shrine to Spielberg. He makes a weird monster movie with his friends. Dawson hearts movies so much. He is, in short, the perfect film student and it's no wonder USC's film school admitted him in a later season — and I say that as an alum of USC's film school. When I attended institution, I was surrounded by Dawson Leerys and that wasn't a bad thing. I mean, you gotta be super passionate, have a thick skin, and a little delusional to endure the rejection of Hollywood.

7. Joey's Jealousy Of Jen Is So Obvious

How on Earth did Dawson not know that Joey was into her? Her passive-aggressive jealousy is all over this episode, including Joey's rude and inappropriate questions during his "date" with Jen. Sure, she's an immature teen, but really, how did he not know? She even tells him in the lobby of the Rialto that he can't see things that are right in front of him. I guess maybe she doesn't know she likes him either, because of them hormones.

When Pacey runs into older woman Tamara after his Rialto knock-out, he gives her a whole speech about how she was flirting with him to still feel young while being on the verge of 40. It's a remarkably accurate speech about aging — something I don't think teenagers really think about, but maybe I'm wrong. Perhaps Pacey reads AARP or something. Either way, the speech leads Tamara to kiss him, so I guess he really has an old soul.

When Dawson and Joey do post-game analysis of what happened at the Rialto, he tells her," When I saw you at the movie theater with that lipstick on I remember thinking how pretty you looked. I mean, I ignored it. But I thought it. But that was it, Jo. It didn't go any further than that." You're in the friend zone right there, girl. Teenage me would've done the same as Joey — pined for him and waited. As an adult, I've been there, done that, got the T-shirt, and moved on. No sense in wasting any time in guys who don't see your worth. And don't worry Joey — in a few seasons, both Dawson and Pacey will know your worth.