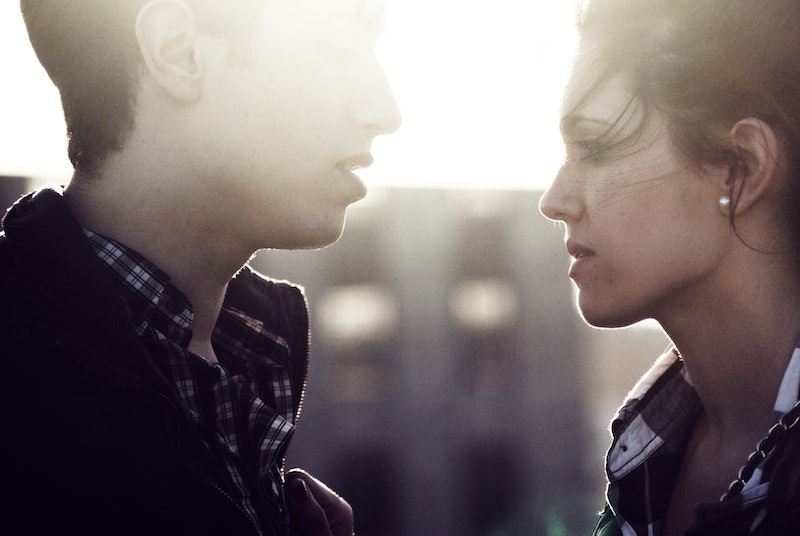 Regardless of why you broke up, communicating with an ex is usually a delicate issue. Egos have been bruised in the past, harsh words were said, and it can be hard to be cordial and friendly, even if you want to do your best to move past it. To those who are making the most of an uncomfortable situation, I applaud you for being adults and trying to salvage a friendship that has already hit the bricks. To those who would rather steer clear of interacting with an ex, I identify completely – that's the side I'm normally on.

What's weird about talking to an ex is that there is the lingering sexual tension mixed with jealousy and bittersweet curiosity that you just don't come across in any other exchange. Someone who was once an open book to you is now totally guarded and watching their language. Both sides of the conversation are trying to keep up an appearance while wrestling inside, trying to figure out the other once-familiar person all over again. It's all just a thinly-veiled battle of wits, and it's the least fun kind.

So whether you have a chance run-in with your ex, or if you've planned for a platonic dinner date together, do your best to power through the awkwardness, or at least try not to blurt out any of these cringeworthy gaffes to them:

About what? Whatever you did that you feel the need to be sorry for, you've probably already apologized for it a million times. And if you haven't yet, you still need to decide if it's really worth bringing up now — even if you were in the wrong. Do you remember your breakup conversation at all? Check the box on this one. No more sorries.

2. How Is Your New Relationship Different From Being With Me?

We know you just want that ego stroke, but you're not going to get it.

3. Do You Ever Think About Getting Back Together

They probably do, and in the same thought, they probably realize that it's a terrible idea. Unless external circumstances were the main cause of your breakup, just be thankful for the time you had together and move the eff on.

This one is only ok if you and your ex have reached that BFF stage where it's been ten years since you were an actual couple. If you've made it so far into the depths of true friendship that you can say "I love you" to each other without meaning "I'm in love with you," then do carry on. Otherwise, please don't.

5. Can I Have That Thing Back?

Good luck with that. Unless it’s a diamond ring that you spent tens of thousands of dollars on, or you signed some sort of pre-pre-nuptual agreement on one of these high-value purchases, consider any gifts that you bought for them non-refundable, and vice-versa. You guys needed to hash this out much earlier, like during your actual break-up conversation.

Cringe. Imagine if they asked you that question. So creepy, right? Sure, you can talk about sex as a general concept (you mature adults, you!), just not as something either of you want to do with each other anymore.

Don't bash your current significant other to your ex! That's so low! And if they don't reciprocate with anything snarky to say about their new BF/GF, it just gets even more awkward. Talk about your current lover freely, just make no comparisons to your past relationship.

8. I Regret Not Doing This Romantic Thing For You…

Even if you do regret all of the time and emotional effort you put into your past relationship with them, that's just mean. If you are friendly enough to be talking to each other still, why would you want to go ahead and pick a fight with them now?

9. I'm So Much Happier Without You

Even though you know it may be true.