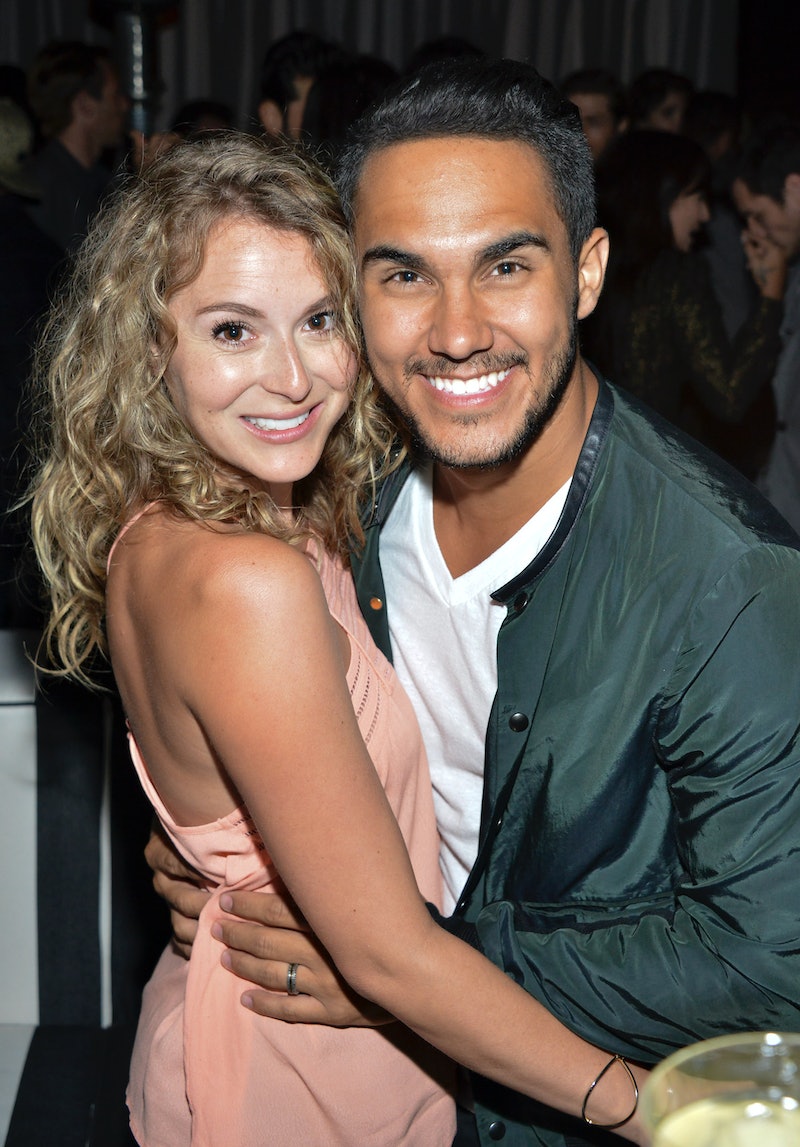 For the first time in its 21-season history, a married couple is competing against each other on Dancing With the Stars . Carlos and Alexa PenaVega are both contestants this season — he's paired with Witney Carson and she's working with Mark Ballas. It's still early in the competition, but both Carlos and Alexa have already proven themselves to be impressive dancers with a whole lot of potential to grow as the season continues. Although Carlos had a stronger performance in week one, Alexa killed it during her salsa routine last week and established herself as a force to be reckoned with on the dance floor. But enough about their on-screen time, how did Carlos and Alexa PenaVega meet?

While the actual moment of their meeting seems shrouded in mystery, Alexa did reveal that when she first met Carlos she wasn't so sure about him. She detailed her feelings to People magazine in 2013:

When I met Carlos, I had never dated a Latin guy ... I don't know if it's because all of my family is like a Latin crazy family, but I've only dated tall, lanky white guys — everybody has been over six-foot-three and white. Meanwhile, Carlos is five-foot-seven, very Latin and he's an actor and I always said no actors — so, he was everything I wasn't looking for, but everything I needed. He is truly incredible.

Aww! Certainly not every couple could handle the pressures of competing against one another on national TV, but these two have been nothing short of supportive and sweet — and that speaks volumes about the strength of their relationship. The Big Time Rush singer and the Spy Kids actress tied the knot in January 2014. Since then, they've built an amazing life together and have even collaborated on a feature film.

Here are seven other things you may not have known about the adorable couple:

Carlos' bandmates James Maslow, Kendall Schmidt, and Logan Henderson were instrumental (pun intended — sorry, I had to) in his proposal to Alexa. He'd been planning the proposal for three months, and they helped keep the secret and give him the courage to go through with popping the question. The proposal itself occurred at a dinner, and Alexa wasn't the only one who cried — Schmidt teared up as well and explained that: "It's emotional! I had never been around an engagement before, and especially not one that was as cute and sweet as the way he was doing it."

And, he did a spectacular job, because this ring is gorgeous, and it's even more meaningful since he designed it from scratch.

3. They Had A Destination Wedding

Carlos and Alexa said "I do" at a resort in Cabo San Lucas, Mexico in January 2014. In a statement to The Hollywood Reporter that week, the couple said: "We are so thrilled and blessed that we were able to have all of our close friends and family join us on our special day."

4. They Combined Their Last Names

I love that Carlos and Alexa both changed their names after they tied the knot. It's the perfect way to symbolize their new life together without either of them sacrificing their own family names. Plus, "PenaVega" totally rolls off the tongue.

Both Carlos and Alexa are devout Christians, and she frequently posts on social media about her faith. Carlos' Instagram bio states that he values God above all else, so they seem to be on the same page about the importance of religion in their lives.

6. Dancing With The Stars Isn't Their First Time Onscreen Together

Earlier this year, Carlos and Alexa co-starred together in the film Spare Parts alongside George Lopez, Marisa Tomei, and Jamie Lee Curtis. The movie is about four Hispanic high school students who form a robotics club and compete against MIT. They play a couple in the film, and Carlos told Latina that co-starring with his wife was an amazing experience:

It was so much fun. I mean, she’s been doing this for years, but for me it’s my first big movie. I was like, "OK, I’m leaving home for 3 months" and then she got on and I was like, "Yes!" Because, you know, she can run lines with me, she can be on set, she can be like, "Babe, that was an awful scene, you should do it again."

7. They Are Puppy Parents

Carlos and Alexa are the proud owners of two seriously adorable dogs — Sydney Raye is a German Shepard and Sasha Bear is a goldendoodle. And, from the looks of it, the dogs run the house.

It's no surprise that Carlos and Alexa have already emerged as fan favorites this season. Regardless of who wins Dancing With the Stars, I love seeing them support and root for one another while engaging in some healthy competition.

More like this
A Former 'Strictly' Star Is Set To Make A Sensational Return To The Show
By Bustle UK
Lisa & Lenny Hochstein's Messy Divorce On 'The Real Housewives of Miami,' Explained
By Jake Viswanath
Winter 'Love Island' May Be Starting Sooner Than Expected
By Maxine Harrison and Sophie McEvoy
Khloé Kardashian’s Son Was Born A Week Before Anyone Realized
By Jake Viswanath
Get Even More From Bustle — Sign Up For The Newsletter