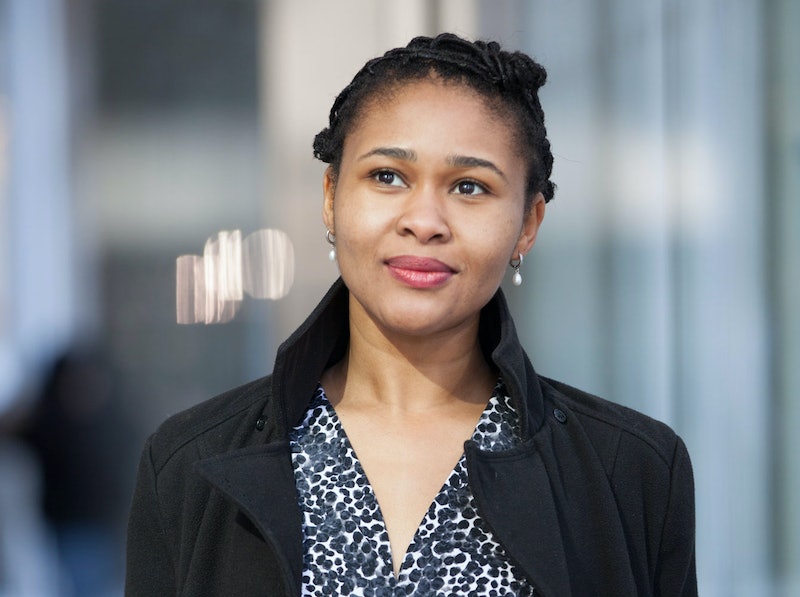 It may be a little early to make sweeping statements about The Year in Books, but Chinelo Okparanta’s Under the Udala Trees (HMH) is my runaway frontrunner for the most important novel of 2015. But not because it proclaims its importance. Narrated by Ijeoma, a midcentury child coming of age in the wake of Nigeria’s civil war, the voice finds power in its restraint. With steadfast contemplation, Okparanta reveals the ugliness and far-reaching damage of a society that criminalizes love, damage that rivals the carnage of war.

Ijeoma’s story begins in the wake of her father’s bomb raid death. Her mother, under the pressures of the war and sudden widowhood, sends her daughter to live with family friends in a nearby town. For this first 50 pages or so, we’re led down a story most readers are familiar with, albeit a new location and conflict we may be unfamiliar with — the tale of a childhood scarred by a battle she can’t control, the necessity of growing up impossibly fast, the indignities suffered when a small girl is entrusted to strangers.

Under the Udala Trees by Chinelo Okparanta, $10, Amazon

While waiting for a well-told but familiar story to unfold, Okparanta surprises us with the true heart of Ijeoma’s tale: she falls in love with another girl. In a conservative and rebuilding Nigeria, their relationship is more than frowned upon. It’s condemned as an “abomination,” punishable by death. Ijeoma’s realization of her love for Amina is rendered with such beauty and kindness, their yearning for each other an ache that reaches out from the text and knots your insides into those same adolescent cravings. Even after being caught and chastised for their condemnable lust, Ijeoma can’t shake the desire she feels for Amina’s touch and companionship. It’s a need so simple and unobtrusive, walled away by the cruelty of a society’s impossibility.

As Ijeoma enters adulthood, her first love departed, she’s forced to choose between a life that’s true to her heart and one that is safe and tolerable to her culture. Her difficulty in occupying either space, and the ripples of misery she unleashes when she isn’t authentically herself, are testaments to the suffering incurred when a society forces people into denying their identities. How much needless heartbreak could we save if we loved without shame? What could we do with all that time saved from forcing ourselves down the wrong path?

Okparanta surprises us with the true heart of Ijeoma’s tale: she falls in love with another girl.

Ijeoma isn’t an outspoken character. She doesn’t give us a hashtag-ready battle cry for LGBT rights. Her activism is personal and internal. Some of the most powerful passages are her private interpretations of the Bible lessons that her mother forces upon her. She sees the scripture as evidence of its own evolution; God’s ability to change the laws as the human heart evolves. The testaments change from old to new, she realizes. Doesn’t this mean that our interpretation of its meaning can change as well? She discovers the gray areas and in it, the ambiguity she need to survive.

The journey to an authentic life for Ijeoma is gnarled, marred by a devastating war and a rebuilt culture of fear. As Okparanta notes in her afterward, Nigeria has become increasingly conservative. Violence against the LGBT company is frequent, and same-sex relationships are illegal according to the practiced Shari’a law. In 2014, the government enacted legislation that makes homosexuality a crime punishable by life imprisonment. Under the Udala Trees reminds us that, despite encouraging victories for LGBT couples in the United States, the fight for human rights is far from over, and illuminates the senselessness of restricting love.

Under the Udala Trees by Chinelo Okparanta, $10, Amazon

More like this
Gen Z Are Twice As Likely To Identify As Queer, According To New Data
By Sam Ramsden
Jessica Simpson On The Time She Was Pursued By A Backstreet Boy & An *NSYNC Member
By The Editors
Netflix Shut Down 'Bridgerton' S3 Rumours About A “Very Dark” Storyline
By Bustle
We’ve Entered The Hot Boy Reader Era
By Samantha Leach
Get Even More From Bustle — Sign Up For The Newsletter
From hair trends to relationship advice, our daily newsletter has everything you need to sound like a person who’s on TikTok, even if you aren’t.