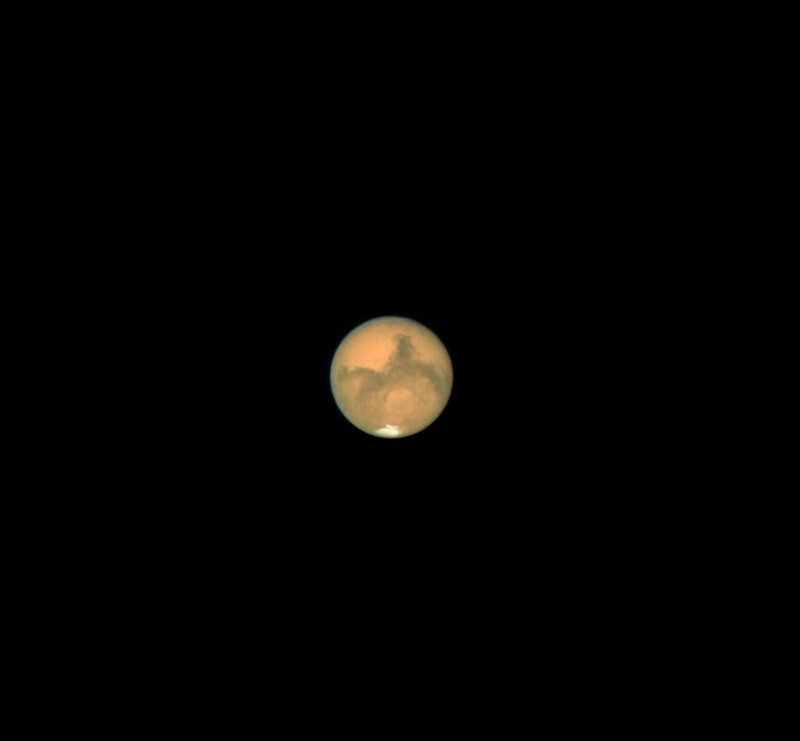 At a Monday morning press conference, NASA announced that it has found water on Mars. On Thursday, the agency had released a press announcement that confidently stated "Mars Mystery Solved," and said it would detail a major scientific finding in its study of the planet Mars. The finding will have huge impacts on future studies, NASA's planned mission to land astronauts on Mars, and the prospect of whether life has or could exist on the planet. NASA has previously found water on Mars in frozen form at its poles, but it still considered the planet hostile to life. What does this new finding mean for life on Mars? Things are only looking slightly more promising.

NASA may have given things away to curious news organizations when they listed the scientists who would be speaking at the press conference. Three of them are the authors of a new paper on "hydrated salts in the seasonal brine flows on Mars." Researchers behind the paper say that analysis of imaging from the Mars Reconnaissance Orbiter proves that "seasonal dark streaks on the Martian surface are the result of briny water periodically flowing across the planet's surface." The paper doesn't say anything about where the water is coming from, but there are really only three options: soil, the atmosphere, or deeper underground.

Alfred S. McEwen, a professor of planetary geology at the University of Arizona and the principal investigator of images used in the paper, confirmed to The New York Times that evidence of salts is clear evidence of water on the Martian surface:

That’s a direct detection of water in the form of hydration of salts. There pretty much has to have been liquid water recently present to produce the hydrated salt.

And here's why this news is extra exciting: McEwen said that the word "recently" meant days before the salts formed. In the summer months on Mars, liquid water runs down canyons and crater walls, leaving dark stains on the ground. But where does the water come from? Scientists aren't sure yet, but they suspect that it comes from underground ice or salty aquifers, or that it may condense out of the planet's thin atmosphere. McEwen said that right now, the Martian atmosphere doesn't appear to be humid enough to indicate that all of the water on the planet came from the air. But he said his team didn't rule out humidity near the surface of the atmosphere, because measurements there have been very poor.

Finding the source of the water will be scientists' next goal, because the places where the water is originating could provide the most promising landing spots for future missions to Mars. Overall, though, this new discovery doesn't change the planet's propensity for life too much. Christopher P. McKay, an astrobiologist at NASA’s Ames Research Center, told the Times that the salt trails don't seem like a promising place for life, even if water is the best sign of life. He said that for water to be liquid on Mars, it must be so salty that nothing could live there:

The short answer for habitability is it means nothing.

David E. Stillman, a scientist at the Southwest Research Institute’s space studies department, told the Times that the saltiness of the water may be different in different parts of the planet, though, which means that the case for habitability is a bit better. He said that, given the streaks present on some parts of Mars, water probably flows there all the time except for in the warmest seasons:

If it was too salty, they would be flowing year-round.

For Stillman and some scientists, the case for potential life on Mars just got a tiny bit better. For the rest, the odds don't look much worse.

More like this
The 15 Best Dresses For Hot Weather
By Andrea Gale Boerem
Wait, What’s Going On With Ben In That Umbrella Academy Season 3 Post-Credits Scene?
By Gretchen Smail
Every Single Big & Small Way You Can Fight For Abortion Rights
By Tess Garcia
For These Abortion Clinic Volunteers, Going TikTok Viral Is A Risk Worth Taking
By Audra Heinrichs
Get Even More From Bustle — Sign Up For The Newsletter