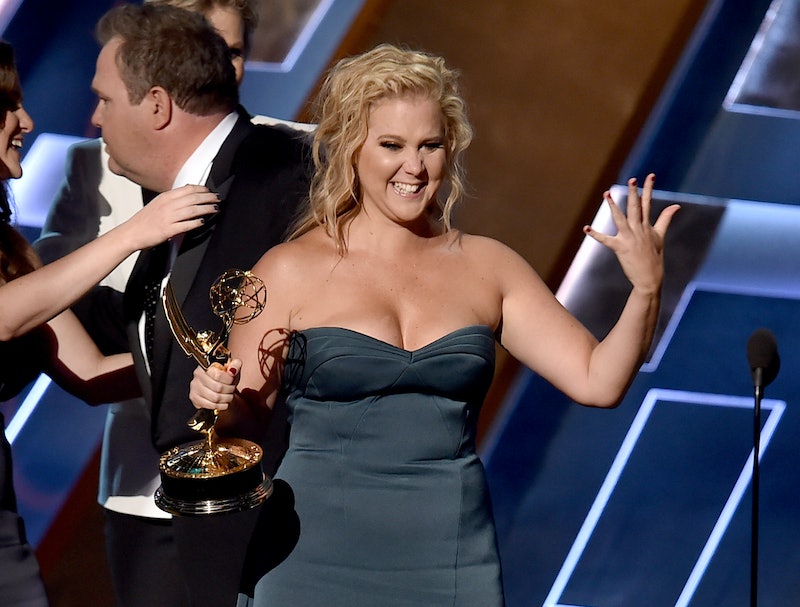 Trevor Noah took over Comedy Central's The Daily Show on Monday night during huge news week — Sunday's Super Blood Moon, a changeover in U.S. Congress, and the Pope's big visit. As the 31-year-old South African comedian began his tenure as host, he referenced that many funny folks turned down his current gig — including women. Who turned down hosting The Daily Show ? Big names like Amy Schumer, Amy Poehler, Louis C.K., and Chris Rock were reportedly all considered for the job that ultimately went to Noah.

And it's something Noah addressed right away in his monologue during his Daily Show hosting debut. He expressed understanding that he's taking the reins from the beloved Jon Stewart and that many people wanted a female host, but he revealed, those women turned down the gig. Schumer and Poehler — two of comedy's favorite Amys — were offered the job and said no, according to several sources. Schumer told Howard Stern in an interview in June that she was honored to be asked. "Them asking me made me cry," Schumer said. "I was like, that means to much to me, that they believed in me like that."

The New York Times reported that Poehler said no to Comedy Central's offer and that Chris Rock was also interested, but only wanted to do the show until the end of the 2016 Presidential election. Even Louis C.K. of FX's brilliant Louie was considered to fill the chair, but according to Grantland's Bill Simmons, the comedian said n-o.

But hey, their loss is upcoming Noah's gain — and it seems like the comedian is doing great in his new gig.

More like this
Amy Schumer Is Actually The Other Kardashian Sister You Never Knew About
By Jake Viswanath
Yes, Billboard Queen Angelyne Really Ran For Governor Of California
By Brad Witter
Kim Kardashian Remembers Her Last Words To Death Row Victim Brandon Bernard
By Jake Viswanath
Cardi B Explains To David Letterman Why She Uses Her Star Power For Politics
By Jake Viswanath
Get Even More From Bustle — Sign Up For The Newsletter