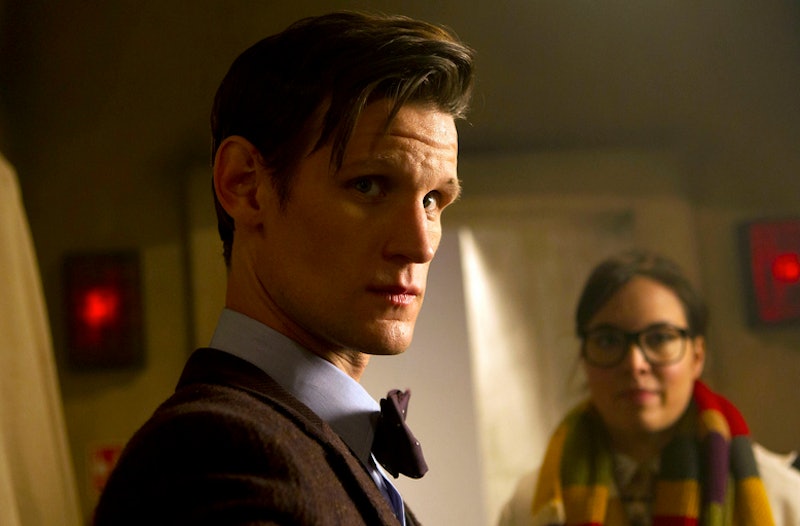 The time has come and gone: Matt Smith is no longer the reigning Doctor, and the Eleventh hour has come and gone. Doctor Who 's "The Time Of the Doctor" bid farewell to that era and ushered in a new one, and so let's take (at least) one last chance to look back at Matt Smith's Eleven and everything he made it.

The Doctor has always been a complicated man, and he was made even more so when Russell T. Davies brought him back as a war-ravaged veteran. We've had three Doctors since then, Smith being (until now) the most recent. Smith's Eleven has been, for his part, a concoction unique among heroes, antiheroes, and Doctors alike: Clumsy and rambling, like a giraffe on stilts who forgot to take his ADD meds, yet venerable and terrifying, able to turn entire armies on their heels in flight with the power of a few sentences. He was a "mad man in a box," and in far more ways than one.

Every new Doctor rings in a new era of a truly one of a kind show. And so, in farewell to Matt Smith and his work as Eleven, let's take a look back at some of our favorite Eleventh Doctor scenes.

It's really the first we see of the new Doctor and his new mannerisms, personality, etc. We see that he's some concoction of the id of Peter Pan and Alice in Wonderland, and we see that this little redheaded child who's found him and is trying to feed him is going to wind up being very important. It's also the introduction of fish fingers and custard, which are icons in their own right in the Who fandom now.

Showing Vincent His Legacy — "Vincent and the Doctor"

When Eleven showed a derelict Vincent Van Gogh that his work will be revered throughout history we were made of tears — we're only human and it was beautiful. It was written by Love Actually's Richard Curtis, so of course it was.

This goes along with the "pile of good things and bad things" scene that came later in the episode when Amy found out Vincent committed suicide anyway.

“Do you know in 900 years of time and space I’ve never met anyone who wasn’t important before?” — "A Christmas Carol"

That quote up there? It's essential to this character, to the show, and to what has made its legacy so enduring. It's the Doctor in a nutshell, and it's a philosophy we could all do with remembering.

On the flip side of the Doctor is the fact that he is, and always will be, a man who's roamed the skies for millennia, and who is responsible for the deaths of millions. He's kind of a fierce dude, in the old sense of the word. This is rarely more apparent than in this monologue, wherein he uses his own reputation to scare his enemies away from acting first.

(You should also watch the version this child did. Because it's adorable and wonderful.)

"I have lost things you will never understand" — "Rings Of Akhaten"

In sort of tandem with that, there's another monologue, although this one evokes less of the Doctor's history of battle — but just as much of his fierceness — and more of the ways in which his history of loss (of people, mostly) has weighed down Eleven every second of his existence. It was some of Matt Smith's best acting, bundling up all of Eleven's loneliness and pain, and it was a deft moment in the lead-in to the show's 50th anniversary.

"Good men don't need rules. Now is not the time to find out why I have so many." The Doctor is a dark man. Matt Smith's Eleven was good at breaking from the glee to remind us of that.

"You Are Unique In the Universe" — "Rings Of Akhaten"

Yes, another one of those you-are-special quotes. But they're very important, to life and to this show. Because if anyone's a special snowflake flitting around the world trying to convince others they're special snowflakes, too, it's the Doctor, especially the Eleventh one. And love it or hate it, it's a thing that some people really need to hear.

The Doctor Meets His TARDIS — "The Doctor's Wife"

The true marriage of the Doctor has always been between the Doctor and his TARDIS. In "The Doctor's Wife," written by Neil Gaiman, the TARDIS is brought to human life. It's a brilliant flirtation, and it includes another trademark Doctor Who quote: "Are all people like this?" "Like what?" "So much bigger on the inside?"

Sometimes it's not just about whole scenes, either, but the individual moments that made Eleven Eleven. Because sometimes he's smooth, but sometimes he's just...

And how fitting was it that the first face his face saw was also the last?

Because as the Doctor said in "The Wedding Of River Song":

I had to die, I didn’t have to die alone. Amy and Rory. The last centurion, and the girl who waited. However dark it got I’d turn around and there they’d be. If it’s time to go, remember what you’re leaving. Remember the best. My friends have always been the best of me.

So in tribute to the Doctor (and the girl who greeted him and then bid him farewell) here's a perfect fan video of our very own Peter and his very own Wendy:

And the perfect gifset, courtesy of the site most fit to eulogize Eleven, Tumblr:

More like this
Ryan Gosling Is Officially Ncuti Gatwa's Biggest Fan
By Maxine Harrison
“The Door Is Always Open” For Another 'Breaking Bad' Spin-Off, Says AMC Boss
By El Hunt
S Club 7’s Jon Lee Continues To Reach For The Stars
By Rachel Mantock
The 'Hocus Pocus' Sequel Finally Has A Release Date & It Makes Total Sense
By Shannon Barbour and Radhika Menon
Get Even More From Bustle — Sign Up For The Newsletter