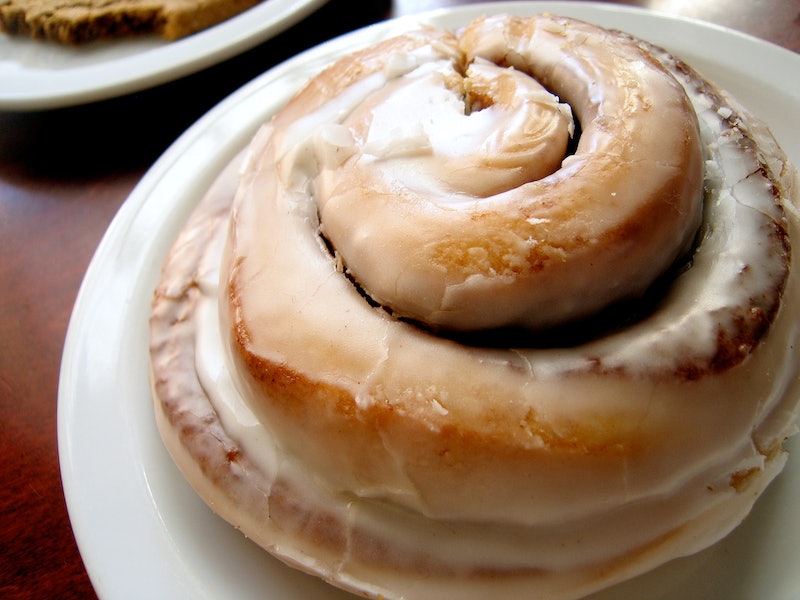 Oreos aren't strangers to creative flavors, and the newest one is as interesting as I've ever seen: Cinnamon Bun Oreos have been spotted, which means that hopefully, we'll soon all be enjoying the taste of warm, gooey cinnamon buns atop our Oreo cookies. How could this not be a beautiful day to be alive? My favorite breakfast pastry and cookie have come together in a combination that people with sweet teeth everywhere dream of.

If you're dying to try one of these new Cinnamon Bun Oreos and are already racing to the store, though, slow your roll: Sadly, they're not available quite yet, and we have very little information about when they might arrive (if at all). The Impulsive Buy reports that we can expect to see this new flavor in stores next month, but there's been no official word from Nabisco on when an official release date for Cinnamon Bun Oreos might be. We'll just have to wait and see when these cookies pop up on supermarket shelves, so keep your ears to the ground, everyone.

While we wait to see what the official scoop is on the Cinnamon Bun Oreos, let's take a look back down memory lane and revisit all of the other flavors that Oreo has released that were inspired by baked goods. Because there's nothing quite like a cookie pretending to be another baked good entirely, right?

For Oreo's 100th birthday in 2012, the cookie brand released a birthday cake flavor to celebrate. Although they were a limited edition flavor, you can still buy packs on Amazon for $15 a pop.

If you're more of a pie person, you'll love Key Lime Pie Oreos, which come complete with a graham flavored cookie that is meant to imitate the taste of pie crust. I love the sweet and savory combination going on here — it's perfect for those who don't like their cookies to be too sugary.

The good and bad thing about s'mores is that you always want more! I'm sure that's what you'll also be thinking after you try S'Mores Oreos — if you can find them, that is! The cookies were a limited edition flavor offering from Oreo and don't seem to be for sale any longer.

Brownie Batter Oreos went on sale in August, making waves across the Internet as they went. As Bustle's Kathryn Kattalia noted at the time, they're rich, but also incredibly brownie-like. Well played, Oreo!

Oreo released a limited edition flavor that was inspired by red velvet cake this past Valentine's Day, right down to a cream cheese frosting-filled center. Hopefully they bring this flavor back next V Day, since this is a flavor that sounds just delicious to me.

It's apparently the year of new Oreo flavors, as Nabisco also released the limited edition Cotton Candy Oreos earlier in 2015. Why not make every day a carnival?

Last, but certainly not least, we have the Cookie Dough Oreos, which were also a limited edition flavor that came out in early 2014. A cookie... masquerading as another cookie... that is unbaked. How meta is that?