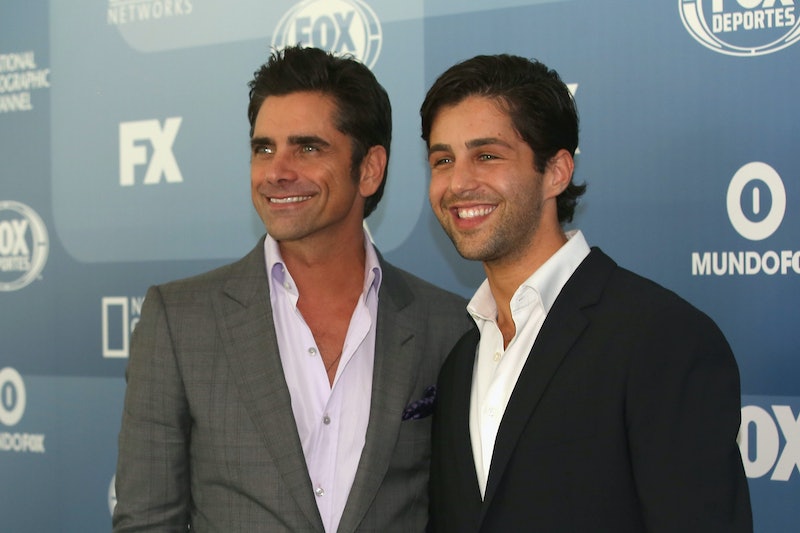 With all the Fuller House buzz and Grandfathered premiering Tuesday on FOX, John Stamos seems to be... well... everywhere you look. (*cue having that theme song stuck in your head for the rest of the day*) While the two projects are unrelated, Stamos does find himself in similar roles. Like Full House’s resident heartthrob Uncle Jesse, Stamos’ Grandfathered character is a bachelor suddenly thrust into fatherhood. And, the similarities between the two shows aren't lost on Executive Producer Stamos, so Grandfathered is ripe with Full House references.

In the premiere episode of the new comedy series Stamos’ character Jimmy Martino is living the quintessential bachelor life. He’s a hot Los Angeles restaurateur with a killer apartment. He’s also 50. Stamos is 52 IRL, which is shocking. I mean look at the man, have mercy. Early in the pilot, Jimmy learns that he has a son, born in 1989, and a granddaughter. Adorable, family humor ensues. Sound a little familiar?

So, what do Grandfathered and Full House have in common? Well, a whole lot. Here’s all of the ‘90s nostalgia you might have missed in the premiere. (If it was this jam-packed already, I can't wait for the whole season.)

The first time we see Jimmy he is plucking a grey hair, and the episode follows up with multiple hair jokes.

Only this time three adorable nieces are replaced with one son and an adorable granddaughter.

Like Jesse, he’s not sure he can do the fatherhood thing. And, like Jesse, he sweetly fumbles his way through.

Like Michelle, Edie is also played by twins. And, just like Jesse fell hard for Michelle, his new character is pretty smitten with Edie.

6. Many Jesse-Era Photos Are Flashed

Throughout the episode, we see a few late ‘80s/early ‘90s photos of Stamos. There’s even a joke making fun of him for carrying around an old photo of himself. Whatever, the man should carry a scrapbook.

Blink and you’ll miss him. In the restaurant scene Saget delivers his own "I won’t have what he’s having" line.

Catch more references, if you can, Tuesdays on Fox.