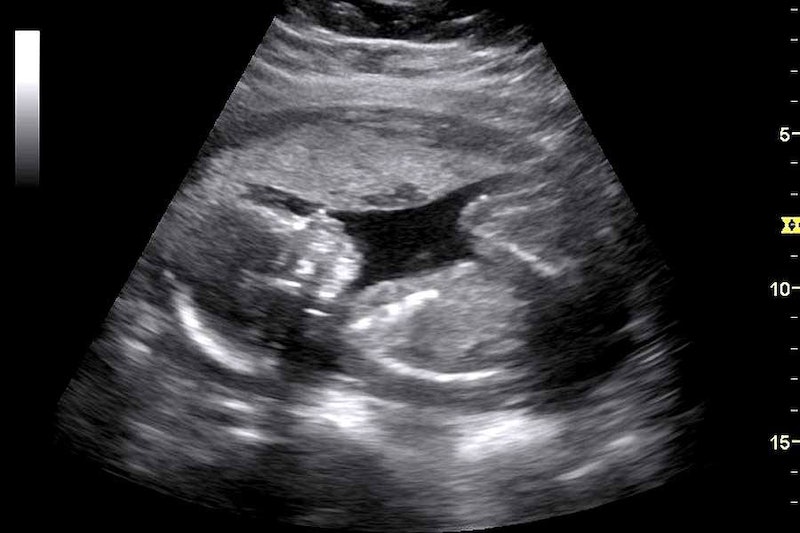 A Michigan woman's Facebook post caught national attention last week for calling out something I bet most women have wanted to do at least once in their adult lives. She told everyone to mind their own damn business when it comes to those baby questions. It all went down September 20, when writer Emily Bingham posted a fake ultrasound photo to Facebook in order to make a little "announcement." OK, so the ultrasound wasn't exactly fake — she found it via Google images — but it was carefully chosen in order to grab her friends' attention. (Mission: seriously accomplished.)

"Hey everyone!!!" the post begins. "Now that I got your attention with this RANDOM ULTRASOUND PHOTO I grabbed from a Google image search, this is just a friendly P.S.A. that people's reproductive and procreative plans and decisions are none of your business. NONE OF YOUR BUSINESS.

Bingham goes on to to explain that part of the need for everyone to back up off each other when it comes to this subject is pretty simple: We are all in different places.

In a separate comment, Bingham speaks to being partly inspired by a friend who recently struggled with fertility. The friend finally conceived, she says, only to be questioned about when she was having another baby, only a month after her child was born. Bingham herself has also fielded comments about her "ticking clock."

The post has been shared nearly 60,000 times, and the supportive comments keep rolling in. It's unfortunately a very relatable position, one that most women in their 20s or 30s have been in. We're forced to explain our reproductive choices to friends, family, and sometimes even strangers. Let's review why you should never ask a woman about the state of her womb.

Maybe She's Trying, And It's Not That Easy

About 12 percent of U.S. women have trouble either getting pregnant or carrying a pregnancy to term. That's roughly one in eight. Chances are you know someone dealing with that right now, and you just don't realize it. So even if she wants to get pregnant, she might be going through painful injections, IVF, miscarriages ... And if she didn't bring it up, she probably doesn't want to talk about it with you.

Many women these days choose to prioritize their education and careers, and hold off on having kids until later in life. And yes, we know you have opinions on that, and you can keep them to yourself. Also, keep in mind that the notion that older mothers have trouble conceiving is actually based on historical records from the 17th century, so it may not be all that accurate in 2015.

Maybe She's Not Going There, Ever

More couples are choosing not to have kids at all — a choice which, I assure you, is absolutely valid. In fact, recent studies show that people without children are just as happy as their breeding friends. Plenty of people are perfectly fulfilled by their careers, partners, friends and hobbies, and don't see the need to bring a kid into the mix. And let's be honest — even if it were possible to talk someone into having a kid, if they don't want one, then they're probably not the ideal parent, right?

While it may seem obvious, it clearly bears repeating: Deciding if and when to have kids is an incredibly personal choice. It's influenced by many private matters (from health to finances), and nobody has a right to demand that information from someone else. So the next time you're wondering about the contents of someone's uterus and think it might make for good small talk, take Bingham's advice: "Ask someone what they're excited about right now. Ask them what the best part of their day was. If a person wants to let you in on something as personal as their plans to have or not have children, they will tell you."