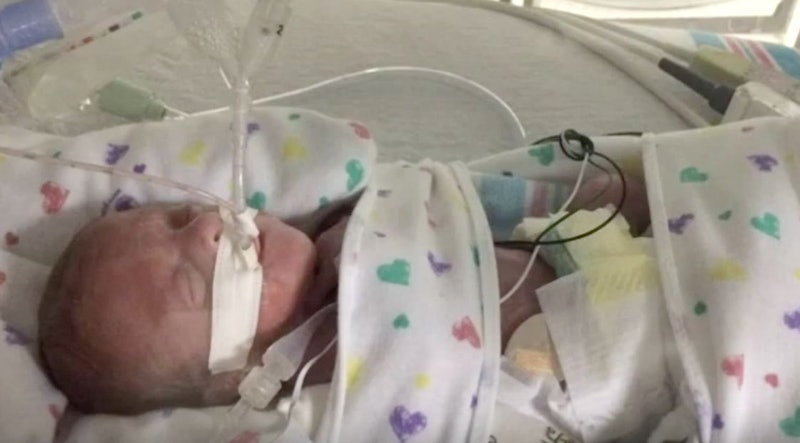 Before any tiny new human arrives and totally upends travel plans with things like scheduled naptimes and round-the-clock feedings, it's not uncommon for parents-to-be to take one last hassle-free vacay. (Otherwise known as the glorious "babymoon.") But for one Utah couple, their recent babymoon went anything but according to plan. As The Washington Post reports, it all happened last month, when Emily and Chase Morgan set off on a Caribbean vacation. Although Emily was just 23 weeks pregnant and given the OK by her doctor to travel, she unexpectedly gave birth 17 weeks early on the cruise ship. While their micro preemie, Haiden, is still fighting for his life, his parents report that he's amazingly beating all the odds.

"The doctors really tell us that he’s a miracle baby," said Emily of baby Haiden, who weighed just 1.5 lbs. at birth. And that's not an understatement — even under the best possible circumstances, preemies like Haiden face a tough road. A May 2015 study published in The New England Journal of Medicine found survival rate for babies born at 23 weeks to be around one in three. What makes Haiden's case even more incredible is that he was born 100 miles from land, and his parents were unable to reach a hospital for an excruciating 14 hours.

The Morgans' vacation began August 30, when they boarded a Royal Caribbean cruise. While most cruise lines have a policy that women cannot be 24 weeks or farther along in pregnancy at any point during the trip, the Morgans sought prior approval from their doctor before booking. (Believe me, cruise lines take this seriously. Before I took a cruise at 22-23 weeks, my own doctor had to fill out a form that said the baby was "nonviable." Knife to the heart right there.) Shortly into the Morgan's voyage, Emily began experiencing labor pains, but shrugged them off as normal Braxton Hicks contractions. But soon after, she noticed that she was bleeding. "I knew something was wrong, but I didn’t really comprehend how wrong," she said. "I didn’t think about what the possibilities were. All I knew was I was going to have a baby."

The ship's medical team encouraged Emily not to push, but there was no stopping the baby, who was born just before 2 a.m. September 1. At first, Emily was told that she miscarried, and the baby was whisked away as they treated her dangerous levels of blood loss. But once Emily stabilized, doctors corrected their first statement: Haiden was in fact alive, but they weren't sure how long he could make it. Emily and Chase aided the effort by incubating Haiden with microwaved saline pouches and keeping him warm with maxi pads — the best things they had available on the boat. But despite their best efforts, it became apparent the baby was suffering from hypothermia.

Just as the Morgans began to lose hope, they docked in Puerto Rico and shuttled 12-hour-old Haiden to a hospital. Within three days, he was healthy enough to be transferred to Miami, where he continues to beat the odds and inspire others. "We were on board the same ship as you and we are so glad to see Haiden is doing so well. We may have never met but I think of you everyday and continue to pray for your son," wrote Misty S. on the GoFundMe page created by the Morgans to help cover baby Haiden's medical expenses.

Jackie D., who shared that she also had a micro preemie, offered some words of encouragement: "[My daughter] has graduated college, works as a professional, and she is getting married. Admittedly, we had some rough years as the early birds have catching up to do, but ... all of that is OK. What matters is that he is YOUR baby & you love him & you all will weather this challenge."

Twitter didn't fail to be amazed by tiny Haiden's amazing determination, either.

Doctors expect that Haiden will remain in NICU until December, when he was initially due. Until then, Emily and Morgan are putting their jobs in Utah on hold to stay in Florida. They are accepting donations, which they say help cover expenses that will undoubtedly pile up quickly. If you would like to contribute, you can head over to the Morgans' GoFundMe page and make a donation yourself.

More like this
Dyson Is Dropping Futuristic, Air-Purifying Headphones
By Rachel Lapidos
14 Easy Ways To Find Joy During The Holidays
By Carolyn Steber
14 Underrated Date Ideas To Try With Your Partner
By Lexi Inks
Bumble's "Compliments" Feature Lets You Message Before You Match
By Lexi Inks
Get Even More From Bustle — Sign Up For The Newsletter