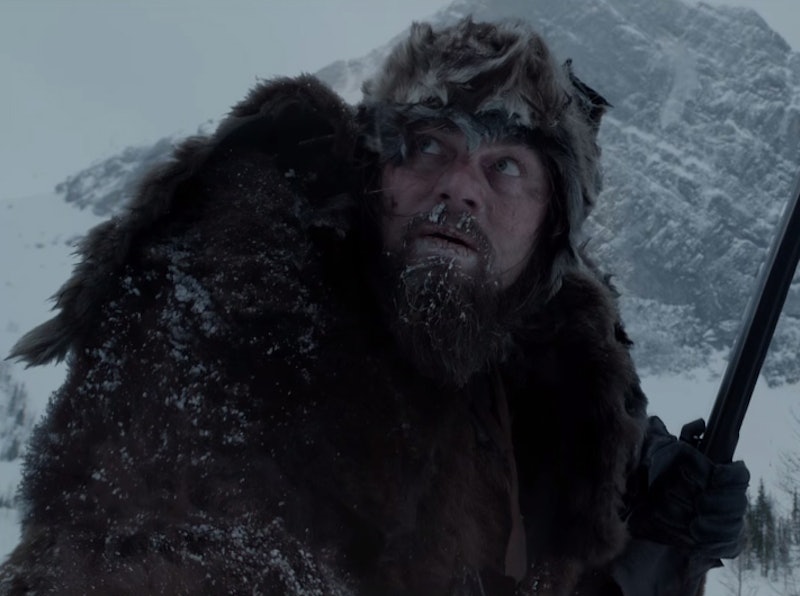 Over the course of his incredible career, Leonardo DiCaprio consistently takes on more and more challenging roles. (Take, for example, the serial killer DiCaprio will play in Devil in the White City.) The first full-length trailer for The Revenant shows that this trend isn't stopping anytime soon. It's a survival story that finds DiCaprio battling the elements and, presumably, will spend much of his screen-time alone.

According to the trailer's synopsis:

Inspired by true events, The Revenant is an immersive and visceral cinematic experience capturing one man’s epic adventure of survival and the extraordinary power of the human spirit. In an expedition of the uncharted American wilderness, legendary explorer Hugh Glass (Leonardo DiCaprio) is brutally attacked by a bear and left for dead by members of his own hunting team. In a quest to survive, Glass endures unimaginable grief as well as the betrayal of his confidant John Fitzgerald (Tom Hardy). Guided by sheer will and the love of his family, Glass must navigate a vicious winter in a relentless pursuit to live and find redemption.

Without seeing a single frame of the trailer, it's evident that this will be one intense movie. However, after watching the preview, I found myself holding my breath and mesmerized by DiCaprio's transformation. He's been nominated for five Oscars, but has yet to win one. Will this be his year? Here are nine moments from the trailer that suggest DiCaprio could finally collect an Academy Award.

1. When We See DiCaprio Running Through The Woods

2. When He Takes Charge

While carrying someone over his shoulders, no less.

3. When He Calls The Shots On The Expedition

Proving that he's got strong instincts.

4. When We See Him With His Son

And our hearts break a little.

5. When DiCaprio Recalls His Son Was Taken From Him

And our hearts break a lot.

6. When He's Alone In The Wilderness

But he can fend for himself.

7. When He Has This Intensity In His Eyes

You forget that you're watching an actor, because he's just that good.

9. When He's No Longer Afraid To Die

And now you just want to know what happens.

You can check out The Revenant when it hits theaters on Jan. 8.