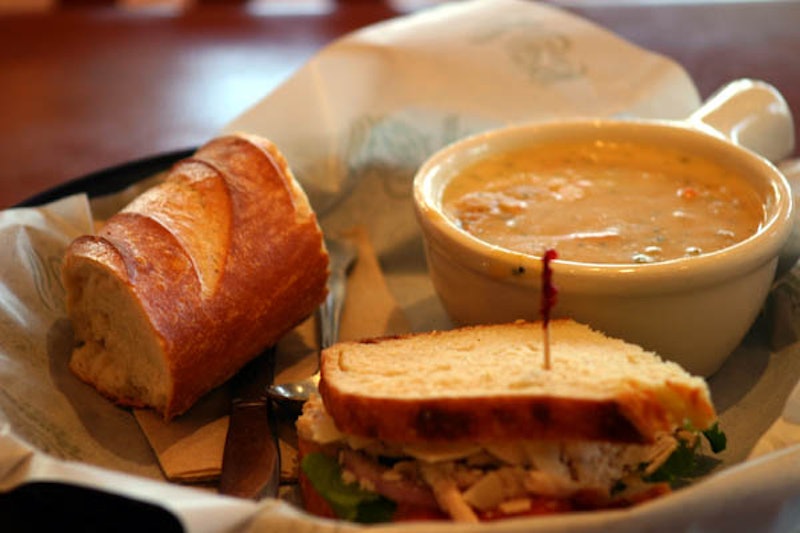 Panera Bread used to be my sanctuary in high school. There was one off campus, just close enough to make it there and back in time for class, but far enough away to avoid any wandering freshmen who couldn’t drive. I spent hours at Panera, and I saw a lot of mistakes over that time. You wouldn’t think ordering at Panera would be a complicated affair, but there are ways you are messing up your Panera order without even realizing it.

I might not be spending lazy lunches during the week at Panera like I used to, but it’s stuck with me, now earning a spot in my weekend routine. It’s tough to beat the free Wi-Fi, delicious bread, and endless stream of people watching. Plus, you can easily get away with eating breakfast, lunch, and dinner in the same place. Not that I’ve ever done that, because that could be borderline pathetic… ahem.

You likely don’t even know that you’re not ordering Panera correctly. Unlike Chipotle and some other types of food, the error of your ways is not as apparent. That’s why this exclusive roundup of what you’re doing wrong with your Panera order is that much more pressing to read. You’ll thank me later, trust me.

Why anyone wouldn’t take advantage of ordering online is beyond me, especially if you aren’t sticking around to enjoy your meal with the free Wi-Fi. You can even delay the order until you know you will be heading over to get it. Plus, some Paneras will deliver it to your door.

2. You’re not ordering from the secret menu (that’s actually good for you)

Secret menu items for most restaurants tend to be insane monstrosities with so many calories you could cry. Panera took a different path with its secret menu, and has power foods that are packed with protein. Try out the power breakfast egg bowl with steak, or power chicken hummus bowl made with jalapeno hummus. We thank you, Panera, for finally inventing a guilt-free secret menu.

3. You’re not pronouncing the names of the bread right

Come now, you can do better than this. I can’t even begin to tell you how many times I’ve heard someone pronounce “asiago bagel” as “ass-ee-ago.” Yikes. You can take the time to learn your vocab and pronounce focaccia, ciabatta, baguette, asiago, and all the other words the way they should be. I won’t even judge you for practicing.

4. You aren’t going with the “you pick two” menu

It’s practically a sin to limit yourself when you don’t have to! Why only have one when you could be tasting two? The “you pick two” applies to everything on Panera’s menu, and you know you want that broccoli cheddar cheese soup and half a panini. Go for it.

5. You’re not getting the baguette on the side of the bread bowl

For the bread lovers out there, you would never commit this crime. Hearing someone order an apple on the side of his or her bread bowl filled with tomato soup makes me cringe every single time. The only thing a delicious bread bowl filled with soup needs is more bread. It’s not like you’re actually going to eat the entire bread bowl after it’s been sitting there holding soup for so long. You need the fresh baguette. Plus, dough is delivered fresh every single day. You can’t pass it up!

No, this is not a plug for Panera’s MyRewards program. This is me helping you get two free pastries from Panera! You get one simply for signing up, plus another every year for your birthday. Even better than that is the monthly rewards they run, like a free cup of coffee every day for members all month long! Free coffee always wins.

Are you thanking me for that free pastry and coffee yet? I thought so…