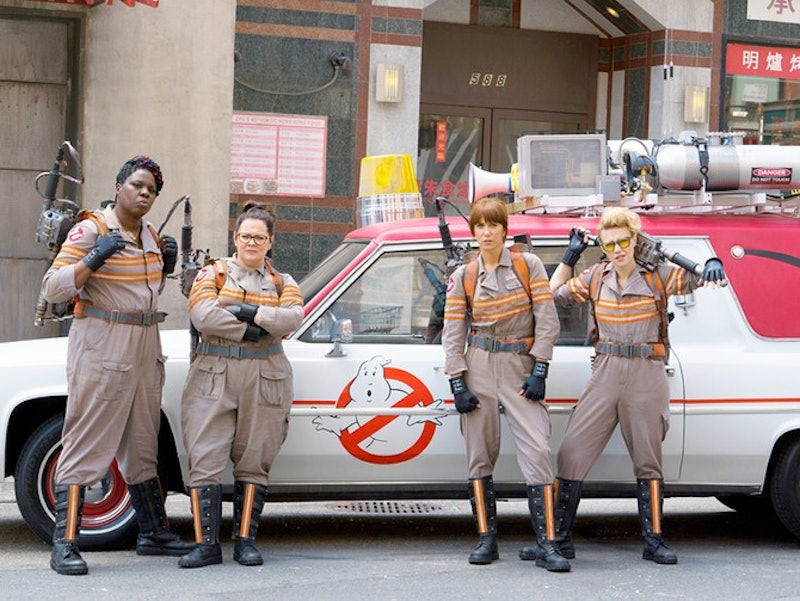 First off, how lucky that you have been able to surround yourself with kick-ass, like-minded ladies who want to nix the sexy police officer uniforms and do something meaningful and creative for Halloween. You go, girls! Being a feminist is a year-round activity, but Halloween can really be a time to shine with an inventive and inspiring costume that sticks it to all the sexist nonsense out there. And making it a group effort is even more impressive! It can be hard to find a theme or a movie or a group that speaks to all of you, so hopefully these ideas will give a little guidance, and maybe turn you on to something you didn’t realize was so empowering. You learn something new everyday, right?

Get ready to rock Halloween with 15 feminist group costumes for you and your squad.

Obviously, Taylor Swift is the queen of squad goals. Her “Bad Blood” music video was so cool and so empowering (Olivia Benson is in it!), that I kind of wish it was a whole movie franchise. Gather your own girl gang, and outfit yourselves in some kick-ass black outfits, sleek ponytails, and radical nicknames this Halloween.

Did you cry when the U.S. Women’s National Team won the World Cup this summer? I did. They electrified a nation, and inspired a whole new generation of athletes and fans. You’ll need 10 friends to field a whole team. Then, all you’ll need are soccer shorts, socks, and some official USWNT jerseys to complete the look.

OK, first off — there are literally no Ghostbusters costumes designed specifically for women that include pants. Hopefully that will change once the new movie comes out, but for now, get in on some unisex jumpsuit action. Don’t forget to copy the new Ghostbusters' hairstyles and accessory game.

4. Imperator Furiosa and the Wives of Immortal Joe from Mad Max: Fury Road

Obviously, Furiosa is a queen, but Immortal Joe’s wives were just as responsible for their feminist revolution. These are all costumes you’ll need to make yourselves — Mad Max Costumes has a good breakdown of what you’ll need for Furiosa and the Five Wives.

Don’t let the short skirts fool you — the Sailor Scouts should be considered feminist icons. Sailor Mars, my favorite, literally says, “You will refrain from underestimating women!” when she transforms. The Sailor Scouts are also a testament to female friendship. You can find complete costumes for pretty cheap — you’ll just have to decide who wants to be who!

There are currently three female Supreme Court Justices sitting on the bench — Sonia Sotomayor, Elena Kagan, and the Notorious Ruth Bader Ginsburg — and you could also throw Sandra Day O’Connor into the costume mix. You’ll just need some black robes, lace collars, and a serious sense of justice.

This is a pretty easy group costume to put together. Pussy Riot members spend more time on bringing down the patriarchy than they do worrying about how they look. Pull some colorful dresses and leggings from your closet, and buy a couple of neon ski masks — you could even carry around some instruments if you want.

Forget that updated witch wear — take a leaf out of the witches of American Horror Story: Coven’s book instead. Break out your favorite black maxi or midi dress, boots, a Stevie Nicks-worthy hat, and a parasol to shade you from all the fierceness you’ll be radiating.

This is a no-brainer group costume! Celebrate the forbearers of feminism with a long dress, warm coat, some boots, and maybe even a hat. You’ll also need some “Votes for Women!” signs or sashes to solidify the cause.

Beatrix Kiddo, aka the Bride from Kill Bill, is a damn feminist hero. Nothing stood in the way of her revenge, or being reunited with her daughter. But the other ladies of the Deadly Viper Assassination Squad were pretty bad-ass too — O-Ren Ishii (Cottonmouth), Vernita Green (Copperhead), and Elle Driver (California Mountain Snake).

There are a lot of super cool princesses to emulate from the Adventure Time TV show. Princess Bubblegum is a child prodigy inventor, Agent Princess is a kick-ass vigilante and secret agent, and (though technically a queen) Marceline is a cool rocker girl who proves that you shouldn’t judge a book by its cover. You can get some of the costumes online, or you could together versions of your own.

Though Harry Potter got most of the attention when it came to the Gryffindor Quidditch team, let’s not forget that some of the best players on the team were all women for a while. Alicia Spinnet, Angelina Johnson, and Katie Bell dominated as Chaser during Harry’s first few years, and eventually Ginny Weasley and Demelza Robins helped win Gryffindor the Cup. Adult Quidditch robes are a little hard to find, but the Harry Potter store has some cool t-shirts that would serve.

Early in the year, it was announced that Marvel Comics would be adding an all-female Avengers title — called the A-Force — to its upcoming roster of comic books. The team, led by She-Hulk, will include Captain Marvel, Wasp, Storm, Jean Grey, Spider-Woman, Scarlet Witch, Rogue, and others. You might have to make most of these costumes yourself, but that’s part of the fun.

14. The Rockford Peaches from A League of Their Own

A League of Their Own is one of my favorite movies and an incredible true story of feminism. Get the girls together to recreate Dottie, Kit, Mae, Doris, Marla, and the gang. Luckily, the uniforms are really easy to find.

You could go old school or new school Charlie’s Angels, but either way, your costumes will be rockin.’ For old school, you’ll need some prime 1970s and '80s fashions (hit up your local thrift store), and some feathered wigs. For new school, go with leather pants and lots of attitude.