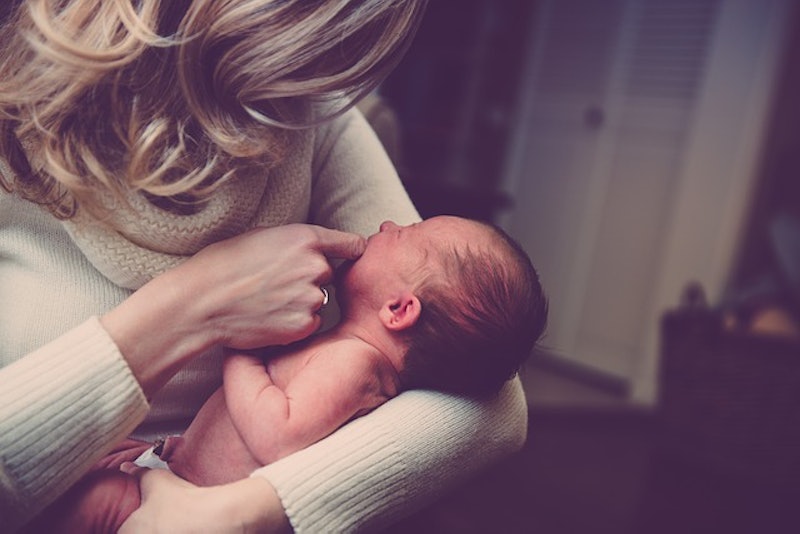 Motherhood is one of those things that people strangely assume the right to dictate. I'm not talking about how to parent well, or how to healthfully raise a happy, functioning human being. No — we don't get particular over the things that would have bearing on whether or not our mothers raise beings that could sustain human life for another generation. Instead, we get particular over arbitrary aspects of the mother's life that have little do with her ability to parent, and only serve to make her feel small or somehow "less than".

Our whole society has a big hangup with sex and partnership and parenthood, and that sentence just felt like the biggest understatement of all time. I believe this is because of the aspects of these things we are taught to resist and suppress. Sex is dirty, partnership is good until it's not, parenthood is only right when you're "ready" (but being "ready" is something we'll only dictate if you're not following the unspoken rules). If it sounds backwards and twisted, that's because it is.

Motherhood, especially single motherhood, is frowned upon because these particular assumptions are made: the mother is not single by choice; children raised by single mothers cannot be happy or successful; single mothers are deemed "incapable" and "unequipped" to do the job without a partner by their side. But then you see examples like a friend of mine, who was raised by a single mom who is healthier and better adjusted than a lot of kids of coupled parents I know. This is just one example, but it speaks to a whole stereotyped demographic. I ask you sincerely to poll all of your friends who were raised by both of their parents — particularly the ones who were unhappy together — and ask them honestly whether or not they would have been happier had they separated (or whether or not things were better once someone left). I guarantee, the results will shock you.

Because the nuclear structure is not a one-size-fits-all. Or rather, it's not a one-size-fits-all-well. Just as we're coming into an age where we can marry partners of the same sex/gender, raise families in communes, plan our pregnancies and control our reproductive systems accordingly, we can also choose to parent without marriage. A family is who you make it. The fabric of the best ones is love, nothing more or less. Here, all the things that happen when you're all about that baby life, but maybe not that wife life:

You Mother Everything That Walks, Talks, And Is In Your Vicinity

Your cat, your best friend, your own mother. You are just a "mom" by nature.

You want a family, and you're not going to wait for someone else to "give it to you," which is extremely liberating in and of itself.

Because of course, if you aren't married before the kid, you'll obviously want to get married after. What are you talking about? Marriage is an absolutely unequivocal part of happiness, just look at any married couple you know! (By now my sarcasm is hopefully bleeding through your computer screen.) For some reason society is fixated on the idea that if you have a child without a partner, you're in a state of waiting to be "complete" — when there are plenty of single parents who feel entirely fulfilled on their own, and have intentionally set the terms of their lives that way. They don't care what prospective partners will "think" of them.

You Find Yourself Weirdly Having To Defend Your Choice As Not Being A Product Of Your Patriarchal Upbringing, But Genuine Desire

This is especially true if you're a young woman: there's a lot of (weird?) stigma around wanting to have a child young(ish), mostly because it's just not what it's in vogue at this present moment in time. People just kind of assume you want it because that's just "what you do," rather than it being something you genuinely, deeply desire.

Your Main Hesitation Is Familial Exile

And you know exactly what I'm talking about. Sure, we all must find it within ourselves to shake off the haters and do what we feel is right, but when "doing what you feel is right" potentially (or probably) comes at the cost of the respect or even kinship of your nearest and dearest, it's something you have to at least weigh.

I, for example, always had my sights on working from home for this reason. Other people may save more each month, or opt for the job with better health insurance, or befriend someone who is willing to kid-sit while you work in exchange for another favor. Who knows? The point is, it's like you have binoculars on, ones that zoom into every possible way you could be the best caretaker possible for your yet-to-be-in-existence little one.

You Realize There Is This Very Strange Stigma Surrounding Single Moms

I remember telling friends in college that I was considering becoming a single mom (if not certainly an unmarried one) and they all but put a blowtorch to my mouth. They told me that was the most irresponsible and disgusting thing to do to a child (yes, "disgusting"). Let's break it down like this: research indicates that the welfare of a child actually has nothing to do with how many parents are in the home or whether or not they are biologically related, but rather with the level of conflict and ability to communicate with the parent(s). Secondly, there is big difference between an unwanted pregnancy as a single woman — one you are not mentally, emotionally, financially, or otherwise prepared for — and well, the opposite. Third, as I expressed my plan was to adopt, I'd rather a child have me as a mother than be in foster care for the rest of their lives. But fourth, and most importantly — it's nobody else's business. So long as you know you are equipped for the responsibility and share that kind of selfless love for another human being for the rest of your life, you are not obligated to listen to anybody's judgments. The decision is yours alone.

More like this
Experts Say These 23 Things Won't Happen In A Strong Relationship
By Carolyn Steber
The Most Compatible Life Path Numbers, According To Numerologists
By Kristine Fellizar
The 3 Most Compatible Matches For Life Path 1s
By Kristine Fellizar
9 Alternatives To The 3-Day Texting Rule In Dating
By Ginny Hogan
Get Even More From Bustle — Sign Up For The Newsletter