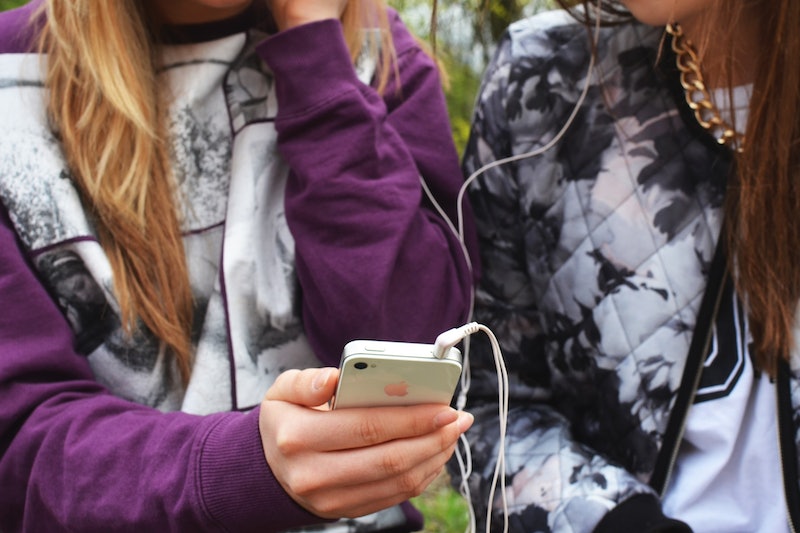 When you've been friends with someone for a long time and have a lot of history together, it's often very hard to acknowledge that you may have outgrown your friendship. Whether you met them in kindergarten, high school, or college, a fair share of your growing up probably happened right alongside your friend — you have years of fun memories, inside jokes, and an enormous appreciation for the times they offered a shoulder to cry on when you were struggling. All of this can make the knowledge that a friendship is no longer working for us extremely painful.

Aside from some extreme examples, differences in maturity are often not terribly pronounced in high school and college. So we're usually on pretty much the same page as our friends then by default — and we often don't expect this to ever change. But as it turns out, adulthood looks different for all of us. People's interests and priorities often diverge wildly once we're in our 20s and 30s — and as a result, some of our friends may no longer be a good fit. And it's usually not because one of us did something unforgivable, but rather because we've simply changed.

Not all friendships are destined to last forever, and that's OK. Outgrowing a friendship doesn't mean that you dislike each other, or that you've stopped caring for one another — and it certainly doesn't mean your friendship was meaningless or that you should regret it forever. But it's important for your own well-being to acknowledge to yourself when a friendship has run its course. Here are seven signs you've outgrown a friend:

1. You Have Nothing In Common Anymore

By the time we hit our mid-to-late 20s and early 30s, many of us are in vastly different places in our lives than our friends. Some people are eager to settle down with their partners and start a family, while others prefer moving around to new cities and exploring various career paths. Neither choice is wrong, but it does mean that we may gradually find ourselves less able to relate to certain friends — and they probably feel the same way. We have developed different priorities and goals, and it can sometimes be hard to find the common ground necessary for meaningful conversations.

Friendships can certainly survive this scenario, especially if you have shared hobbies and interests. But if you and a friend are in different life phases and you don't really enjoy any of the same things, your friendship has probably run its course.

2. Neither Of You Prioritizes The Friendship

You don't feel like initiating plans with your friend because you don't have much to say to them, and they don't seem like they're especially eager to see you, either. Most of your interactions occur via social media or brief texts, and you'll casually mention "getting together soon", but neither of you acts on it. It doesn't mean either of you has done anything wrong; it's just a sign that you're both feeling the distance and you have other priorities. There's no need to feel ashamed about this — you're not a "bad friend" for growing apart.

3. They Don't Celebrate Your Successes

You've worked hard to accomplish something, whether it's a new job or a major lifestyle change, and your old friend doesn't even pretend to be happy for you. We all figure things out at different paces — some people jump into their chosen career a week after college graduation and don't look back, while others need a period of trial and error in a few different industries. Similarly, some people move to the perfect city right away, while others move around a few times before finding a place that feels like home.

If your life is finally falling into place and you know that a friend is still floundering, you should certainly be sensitive to that and refrain from gloating or chattering about it nonstop. But you also shouldn't have to hide your happiness about a certain accomplishment from them. If they're too upset about their own rut to be happy about your progress, you've probably outgrown the friendship. Mature friends don't try to bring each other down.

You've either made new friends or grown way closer to other old friends — usually because you share similar goals and you can rely on them for solid, mature advice when it comes to your career, your family, and relationships. As you become closer with new pals, you may find yourself wishing that your old buddy could just be more like them. But we can't change people — so we sometimes need to accept that a friendship is no longer the right fit for us.

5. You Find Their Behavior Childish

Sure, you spent countless nights together engaging in questionable debauchery when you were younger, but at this point you find their stories of wild evenings out repetitive, immature and even somewhat annoying. There's nothing wrong with letting loose and enjoying a fun night on the town on occasion — but if your friend can only talk about the latest party they attended or newest nightclub they're dying to visit, while you're more interested in building a career and spending quality time with Netflix on a Friday night, you may find yourself judging them for being immature... and then immediately feeling guilty about it. Even if you find their behavior frustrating, they still deserve friends who aren't silently judging them — so you're really doing both of you a favor by creating some distance.

6. They Have The Exact Same Problems They Did Years Ago

Your friend doesn't seem to have grown from experience. They constantly make the same mistakes they did when you were younger and you've begun to resent listening to them complain about the consequences over and over again. You devote time and energy to providing advice and support, only for them to turn around and make the same poor choice a week later. You can only, say, tell your friend they're too good for pretentious, condescending guys so many times before you slam your head against the wall in frustration. (I'm speaking from experience — and yes, I did actually slam my head against the wall.)

7. Nostalgia Is The Only Thing Holding Your Friendship Together

When you've been friends with someone for a long time, you naturally have years of happy memories that always bring a smile to your face. But if memories are the only thing about the friendship that make you happy, it's a sign that you're staying attached for the wrong reasons. If you cherish the memories, the best way to keep them intact is to let yourselves gracefully grow apart, rather than stay in a friendship that leaves you feeling frustrated or bored in the present. And who knows? In a few years, maybe you'll both find yourselves in a place where it makes sense to reignite the friendship. Putting the brakes on a friendship you've outgrown doesn't mean you'll never speak again — it just means that right now, getting some space makes sense.