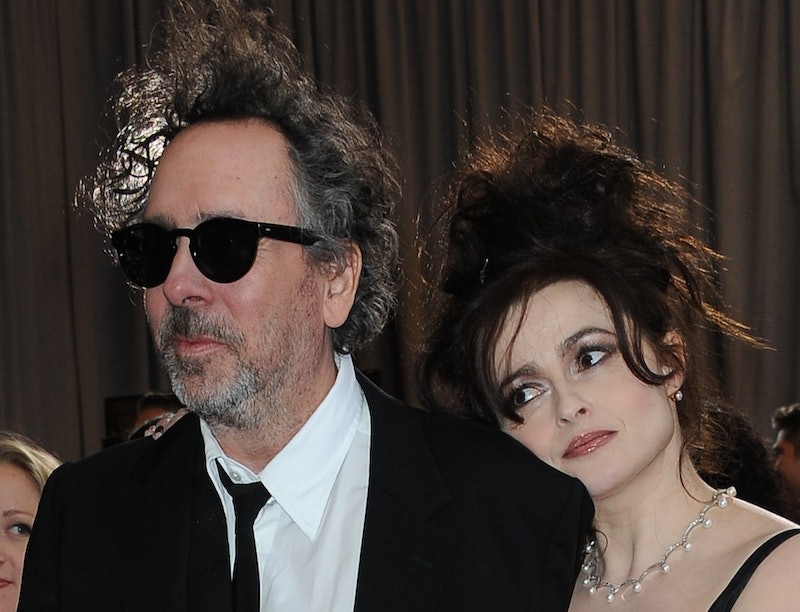 I can't believe it's been almost a year since the tragic news that Tim Burton and Helena Bonham Carter broke up after 13 years together. I mean, forget Ben Affleck and Jennifer Garner, forget the ever-constant Beyoncé and Jay Z divorce rumors, it was Burton and Carter splitting that represented the true mark of love being dead in Hollywood. I thought they would be together forever, making odd films starring Johnny Depp and Carter, in which Burton continued to direct Depp in the on-screen wooing of his longtime partner. Sadly, it's still unclear whether we will ever have such movie magic again. Now, Carter is talking about her split from Burton at last, and she approaches the situation with such rational calmness that it's pretty clear she's made her peace with it. That's both bad and good for people like me, who absolutely adored the couple together.

"I could write a thesis on what's happened and it is all-absorbing when a relationship breaks down," she said during an interview with the British magazine Red. "But I think we're coming through it, and I think we'll have something very precious still. Our relationship was always somewhat special, and I think it'll always remain special." Someone, quick, help me. Should I be happy because she still believes that their relationship is special or should I freak out because she only "thinks" that they'll have something precious still? Someone, quick, help me! Do I cry or do I smile? I don't know how to feel right now.

But the interview did not end there. Carter went on to say, "We did find each other. And really, the mark of a successful relationship shouldn't be whether you're there forever after. Sometimes you're not meant to be forever together. Sometimes you have to come to terms with the fact that that was it. But that was a gift, a massive gift. We gave each other children and a lot more else." OK, yes, that's it for me. Excuse me, I need about an hour alone and a giant tub of Ben & Jerry's, because I'm going to be crying into my hands for the rest of the day. While I miss seeing the pair of them decked out in all black on the red carpet and looking for all the world like they just stepped fresh from the world of The Nightmare Before Christmas, while I miss hearing them talk about each other fondly in interviews and playfully poke fun at one another, while I miss seeing them light up when they discuss the children they have together, Carter seems to be in a good place at the moment.

On top of that, she does make an interesting point. Most people would consider a relationship as having failed because it's over, because, after all, what good is a romantic relationship that blows up in your face (so to speak)? Isn't the whole point of a relationship to find your soulmate, and be with that person forever? If a relationship can't work out after 13 years, what hope do the rest of us have? However, it's worth noting that Carter and Burton parted amicably, that they still share two kids together, and that they are still a part of each other's lives even if, according to her, they're "not necessarily living together." Carter is not the same woman that she was before she met and fell in love with Burton, and neither is he the same man that he was before he met and fell in love with her. They changed one another and, through their relationship, grew into the people that they are today. Who are we to say their relationship was not a success now just because it's over?

At the end of the day, I'm glad that Carter has such a peaceful and even fond outlook on her relationship. It might kill me that it's been almost a year since these two kooky celebrities were together, but I can at least be happy that they seem to be happy. And, if I end up watching Dark Shadows one too many times in grief, then that's no one's business but mine.