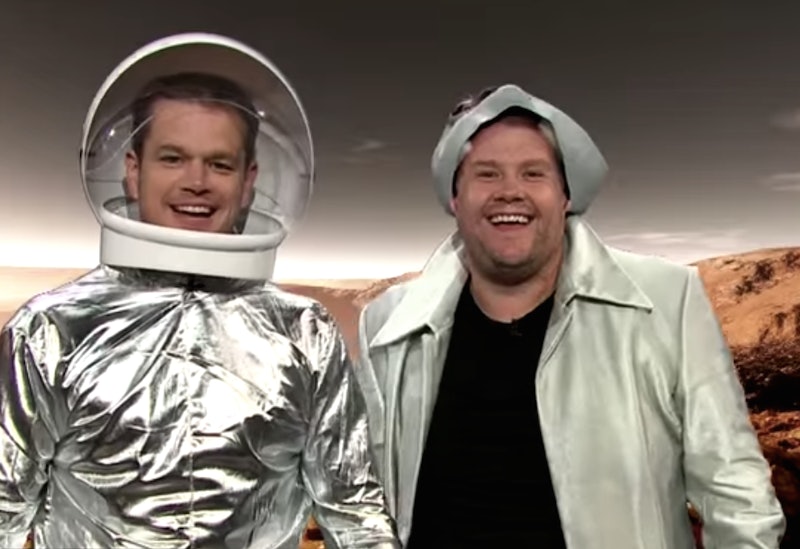 Matt Damon may be the source of a lot of controversy as of late, but I think we can all agree that he still remains one of the greatest actors of our age. At no point was that more obvious than when Damon reenacted his entire film career on The Late Late Show with James Corden, because a) why not and b) because James Corden exists to give us amazing moments to make us smile. The entire process took about eight minutes all together, and the films that Damon and Corden acted out ranged from Good Will Hunting to the upcoming The Martian to even The Talented Mr. Ripley. The movies were acted out in no particular order, through heavy use of green screen and props, and, no, seriously, it's the greatest thing that you are likely to see all day.

And, OK, you might get a better judge of Damon's acting talent from, you know, actually watching any of the movies that he reenacts in the sketch, but who has the time for all that? Especially when they're not all on Netflix? Especially when Damon himself proved so willing to give us all a general overview of what they're all about and what role he played in all of them?

Check out some of the highlights below, and know that now, next time you want to enjoy a Matt Damon movie, you don't have to actually block off two hours of your time.

There may or may not be a Martian in it, but you should definitely go and see it anyway because it's coming our way very soon. And that's it. That's the entire sketch.

In which Matt Damon and a bunch of celebrity cut out faces rob a casino, and no one notices because this is a strange enough sight that everyone was distracted.

In which Matt Damon and a bunch of celebrity cut out faces rob a mansion. Also, Corden is George Clooney.

In which someone points a gun at Matt Damon, and he's like, "Hey, don't point a gun at me."

Is it bad that I could recite this entire scene verbatim along with him? How d'ya like them apples, Corden?

He's still Jason Bourne! And James Corden is really good at fake-taking a punch. Seriously, he should really consider co-starring alongside Damon in Damon's next film, because their chemistry is off the charts.

Check out the entire reenactment below.