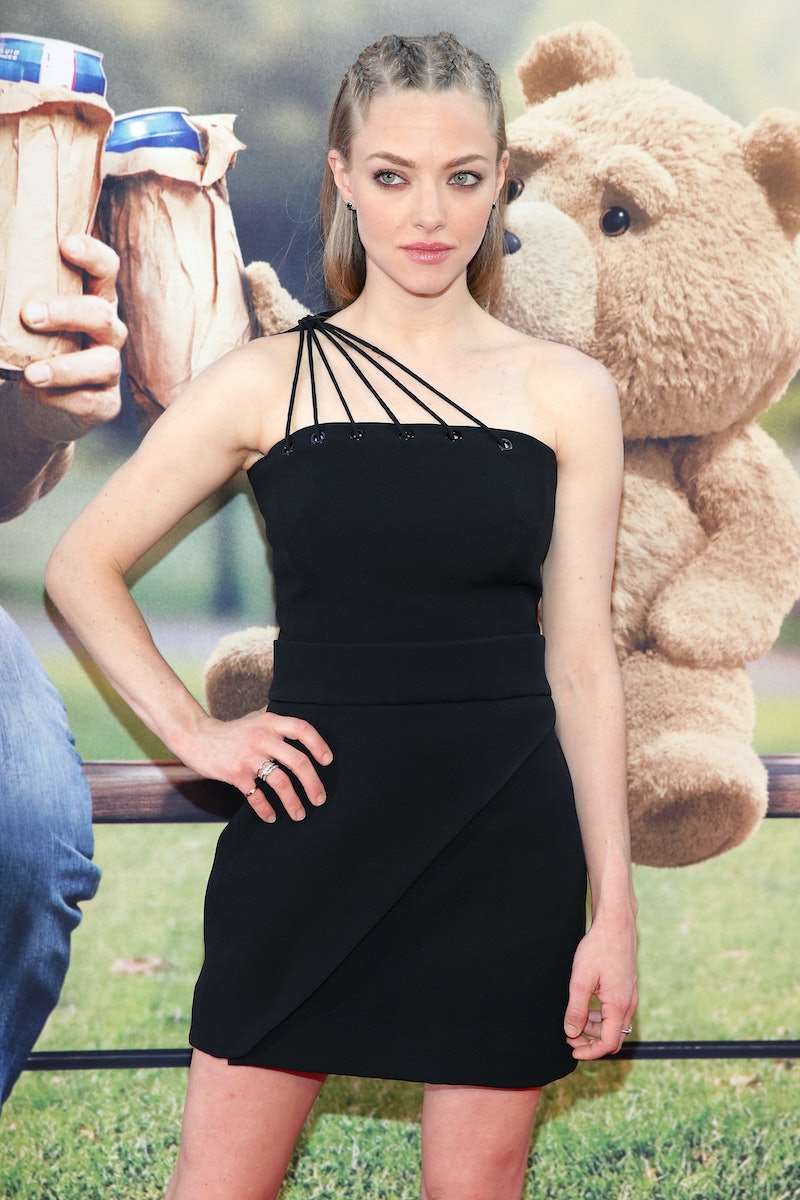 There's another celebrity split to discuss today. Actress Amanda Seyfried and Justin Long have reportedly split, after two years of insanely adorable couple hood. Sigh. While 2015 has been the year of huge celeb splits, I am not ready to declare that "Love is dead." The doe-eyed actress will bounce back. Know how I know this?

There are two key reasons. The first is that she is stunning, as evidenced by the way she slays red carpets on the regular, thanks to an flawless sense of style and good taste.

While it sucks to see such a cute couple end their relationship, I'm focusing on the positive and looking back at seven times that Seyfried showed up on the red carpet and totally owned. She is just 29 and will turn 30 at the end of this year, but she exudes glorious youth and femininity when she gets all dolled up.

Let's "ooh" and "aah" over some of Seyfried's biggest fashion wins. There are plenty!

I'm partial to this black and gold brocade and metallic mini by Oscar de la Renta, which she wore to the 2015 Tonys, because it showed off her shoulders and her legs.

Seyfried's halter-neck white Givenchy Haute Couture gown at the 2015 Met Gala was elegant. It also had quite a bit of feminine detailing.

3. Even Actresses Get The Blues In Gucci

Seyfried made the blues look good in this sheer, polka-dotted, and midnight blue-hued Gucci frock. It was super retro and wearable.

This metallic Gucci mini, which looked both golden and bronzed, was one of her sexiest sheaths ever. It was super '60s and mod.

This satin red robe made her look like a ruby or a garnet! It was tricky and also very '70s in its vibe, but it was also memorable. The crimson color popped against her blonde locks and porcelain skin.

This fitted, keyhole McQueen gown, worn to the 2013 Oscars, caused some drama. This dress was too similar to the Valentino gown her Les Miz co-star Anne Hathaway planned to wear, and Hathaway had to quickly swap out for a pretty but ill-fitting pink column Prada gown to avoid being twinsies. Thus, #Dressgate was born. Seyfried won that fashion round, though, as this silvery dress was stunning.

Seyfried wore a flame-colored and belted tulle Givenchy to the 2013 Vanity Fair Oscars party. The neckline had multiple dimensions, like the neck region, which resembled a choker and/or a scarf.

So many red carpet wins for Seyfried!

More like this
Amanda Seyfried Reflects On 'Mean Girls' & "Gross" Remarks That Men Made After It
By Jake Viswanath
Machine Gun Kelly Wore A $30K Diamond Mani To The BBMAs
By Paris Giles
How To Master Baby Braids, According To TikTok
By Tomi Otekunrin
All Of Kourtney Kardashian’s Wedding Dresses
By Allie Fasanella
Get Even More From Bustle — Sign Up For The Newsletter