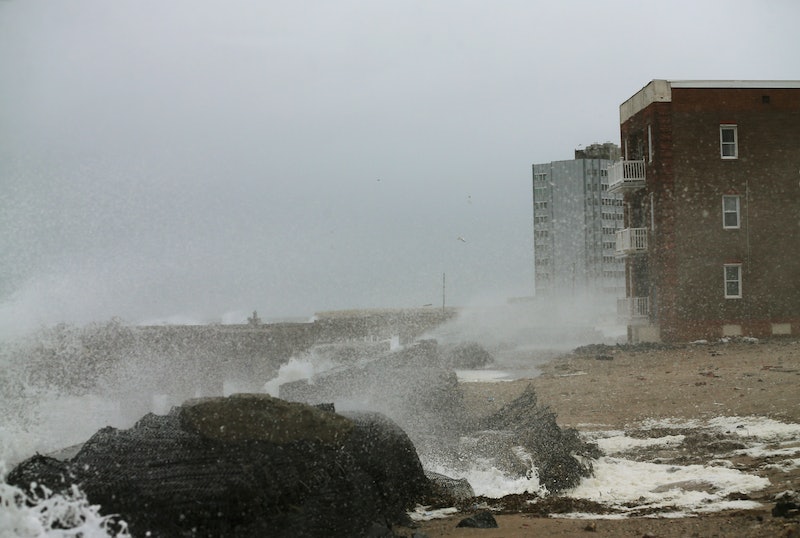 Tropical storm Joaquin officially became a full-fledged category 1 hurricane Wednesday morning, according to AccuWeather. Joaquin is the third hurricane of the 2015 Atlantic season, and it's skulking about 250 miles east of the Bahamas with winds of 75 mph, according to NBC News. Where and when could hurricane Joaquin make landfall on the East Coast? Scientists are torn about whether the hurricane will actually hit the coast, but parts of the coast will definitely experience harsh weather.

Some forecasters believe Joaquin could make landfall on the East Coast in the mid-Atlantic region on Sunday, but others believe that it won't hit the coast at all. Rather, the latter forecasters think that the hurricane will just pass along the coast, bringing heavy rain and flooding this week and next week, according to NBC News. The storm is predicted to move southwest before heading north, but meteorologists disagree about what will happen next. Some experts predict that the center of the storm will stay offshore as it moves northward, while others predict that it will make landfall, either in North Carolina or Virginia this weekend, according to NBC News. Further, Joaquin could converge with a slow-moving storm system off of the D.C.-North Carolina-Virginia area early next week, adding to AccuWeather.

The difference in opinions will become more settled throughout the weekend, but the National Weather Service issued a hurricane warning for Joaquin early Wednesday in the Bahamas, according to NBC. If the storm does hit the East Coast, affected areas could see winds as strong as 100 mph and torrential rains. The National Weather Service's map of the hurricane's direction stops at Virginia and North Carolina, where it says the hurricane will be at about 2 a.m. on Monday. Brian Fortier, senior meteorologist at The Weather Channel, told NBC that people living in states that might get hit should be alert and prepared:

It could be a significant situation. Everyone along the Northeast coast, right up to New England, should keep a close eye on the forecasts.

Experts at the National Hurricane Center wrote on the center's website that their confidence in the current forecast track for the hurricane "remains very low," but that it will clear up as the week progresses and they see what impact the brewing storm system in the mid-Atlantic could have on Joaquin, according to The Baltimore Sun:

The details of how significantly, and even if, that storm will impact the Mid Atlantic will become clearer as the week progresses. If it does impact us, a period of time within late Friday through Monday is most likely.

Well, hopefully they figure that out soon, because, you know, it's a hurricane.

More like this
What To Know About Taking More Than 1 Piriteze Per Day
By Bustle UK
The 6 Best Balaclavas To Keep Your Face, Head & Neck Comfortably Warm
By Jenny White
How To See The Lunar Eclipse On May 15-16, 2022
By Kaitlyn Wylde
5 Crystals To Manifest More Money
By Megan McCarty
Get Even More From Bustle — Sign Up For The Newsletter