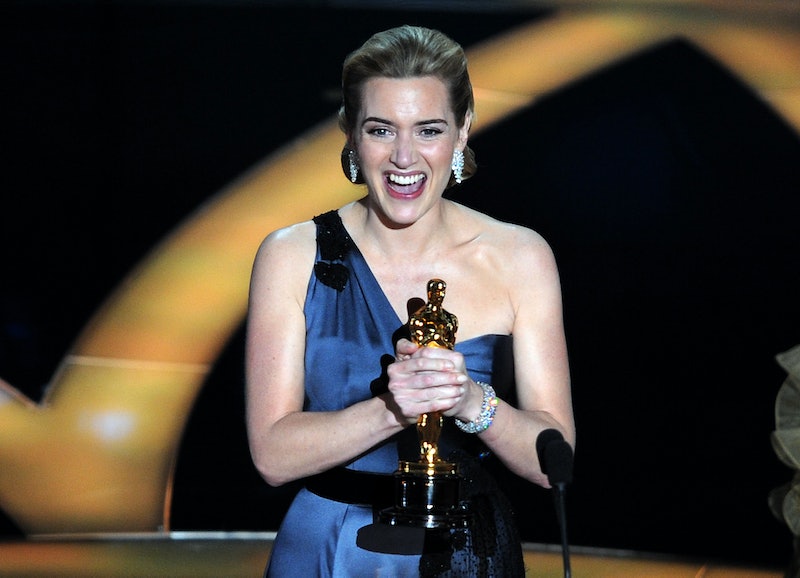 I think I join many other movie fanatics and entertainment freaks in imagining what it would feel like to win the most coveted award in the film world: an Oscar. When I was younger, I definitely used to "practice" my future speech and write my dedications to my adoring fans, because I was so sure I would be on stage accepting and Academy Award some day. What can I say? I had a big imagination. Many of the most famous actors out there also used to dream about their big day, so what happens when they finally do get that ultimate prize? Well, if you're Kate Winslet, you keep your Oscar in your bathroom.

While promoting her upcoming film Steve Jobs Queen Winslet opened up to the Wall Street Journal about everything from getting nude for a film to her past marriages, but she also kept things light with an adorable anecdote about her golden statue. The writer notes that Winslet confessed she only watches her films once after she completes them, but that she is very proud of her Best Actress Oscar for The Reader. She then explained she keeps it in her bathroom, saying,

The whole point is for everybody to pick it up and go, "I’d like to thank my son and my dad" — and you can always tell when someone has, because they’re in there a little bit longer after they flushed. They’ll come out looking slightly pink-cheeked. It’s hysterical.

Uhhhh, Kate. How do you know my inner thoughts so well? I knew I liked you. This imagery is killing me because I can absolutely imagine washing your hands, catching a glimpse of the statue in the mirror, and thinking, "This is it. This is my moment with Oscar." Thank you for watching out for us, Winslet.

This isn't the first time the 39-year-old has mentioned her statue's whereabouts. She once told UK's GMTV that she keeps it in the bathroom so that people "sneakily have a little [hold] and put it back down again." She continued, "Basically everybody wants to touch it, everybody wants to hold it and go 'Oh, my gosh,' and 'How heavy is it?' So I figured if I put it [there], then people can avoid the whole 'Where's your Oscar?' thing."

There you go. Handling two problems with one solution. She's actually not the first star to keep their award in an unusual place. Emma Thompson also keeps her statues in her bathroom, telling Time, "They look far too outré anywhere else... They're great big, gold, shiny things. They're up there tarnishing quietly along with everything else I own, including my body."

Actor J.K. Simmons has confessed of the interesting home he found for his Supporting Actor win for Whiplash at this years awards. He told USA Today, it used to sit on the mini-fridge in his bathroom (yeah, he has a mini-fridge in his bathroom), before finding a more suitable home on a bookshelf. "It's a lovely little statue," he said. "It's still kind of surreal when I walk past it. It's like, 'There's my Oscar.' I don't know it will ever become commonplace."

I, honestly, would have never thought that the bathroom was such a hotspot to display the pinnacle of your career in film, but it sure beats speaking into a half-empty shampoo bottle, amiright?