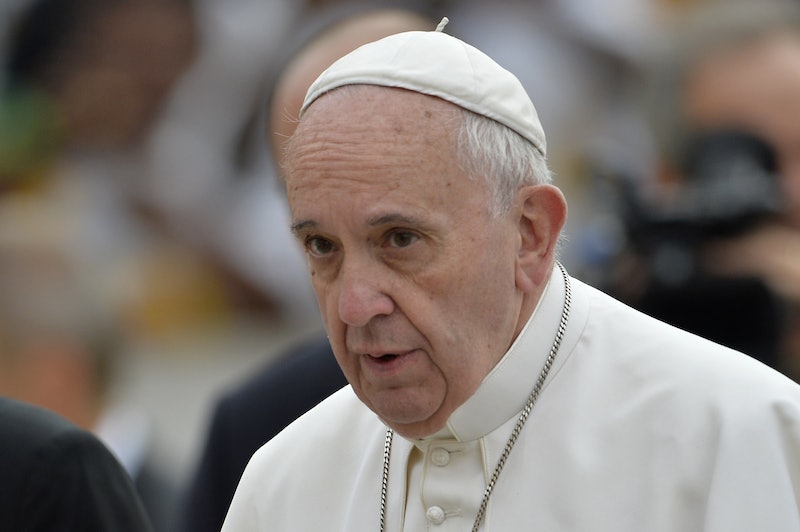 During his whirlwind six-day tour of America, Pope Francis visited with the White House, Congress, missionaries, and throngs of everyday people who follow the religious leader. There were countless people who hoped for a personal meeting with Francis, but due to his packed schedule, he had to be quite selective. According to a The New York Times report, one of the lucky few happens to be one of the most contentious figures in America currently. A Vatican spokesperson apparently confirmed to the paper that Pope Francis met with Kim Davis while he toured the U.S., a claim that was also backed up by Davis's lawyer. To many people, Davis may be a one-woman symbol of religious freedom, but there are so many others who Francis could have met with instead.

On Tuesday, Davis's attorney, Mathew D. Staver, told the Times in an interview that Davis and her husband were escorted to the Vatican Embassy last Thursday and spent about 15 minutes with Pope Francis. Surrounded by security and photographers, Staver recounted, Francis gave Davis rosaries and encouraged her to "stay strong."

On Wednesday, Vatican spokesman Rev. Federico Lombardi seemed to confirm the meeting, telling the paper, "I do not deny that the meeting took place, but I have no other comments to add."

Francis's alleged decision to meet Davis is indisputably loaded, clearly revealing his position in the debate between marriage equality and religious freedom. In fact, the pope commented to reporters on religious freedom during an interview at the end of his trip, alluding heavily to Davis:

Conscientious objection must enter into every juridical structure because it is a right, a human right.

Not surprisingly, the reported meeting has polarized the two sides even further, with those who support Davis's fight for religious liberty seeing it as validation of their cause while proponents of marriage equality see it as indication that the pope is not as progressive as he's often regarded.

Republican candidate Mike Huckabee, who has been one of Davis's most outspoken high-profile advocates, issued a statement after reports of the meeting came out:

Clearly, Huckabee sees the meeting as vindication for the backlash and legal struggles Davis has had to face.

Meanwhile, those who see her actions as denying Americans their Constitution-protected right to marry are more critical of the pope's alleged decision.

For a pontiff who has made history by breaking down certain antiquated traditions and beliefs of the Catholic Church, and for such a significant trip to the U.S., Pope Francis could have selected countless people and groups to meet with that would have substantiated his openness to progress, but instead he took a major step backwards. Here are nine people and groups he could have met with that would have reinforced his image as the pope we all hope him to be.