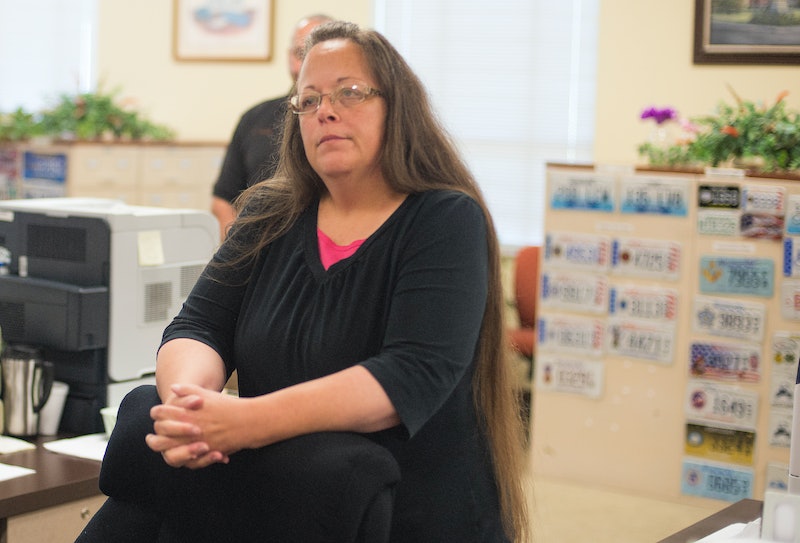 While Pope Francis was in Washington D.C. last week, he allegedly had a private meeting with Kim Davis, the Kentucky county clerk who refused to grant marriage licenses to same-sex couples. Davis' lawyer, Mathew Staver, first made claims that the clerk who spent five days in jail for defying a federal court order to issue marriage licenses met with the leader of the Catholic Church on Tuesday, and the Vatican confirmed the meeting's existence. Vatican spokesperson Rev. Federico Lombardi told The New York Times Wednesday: "I do not deny that the meeting took place, but I have no other comments to add." Now, the question on everyone's mind is: What did the Pope say to Davis?

Wednesday morning, Davis described the exchange to ABC News, saying that she and her husband traveled to Washington D.C. after getting a surprise phone call from a church official. However, The New York Times reported that Davis was already in Washington to receive an award from the conservative advocacy group the Family Research Council. According to Davis, the couple was sneaked into the Vatican Embassy to meet with the pope on Thursday, the same day he addressed Congress, and Pope Francis was surrounded by security guards, aides, and photographers.

She told ABC News: "I was crying. I had tears coming out of my eyes. I'm just a nobody, so it was really humbling to think he would want to meet or know me."

By Davis' account of the meeting, Pope Francis offered his support and encouragement for her fight to not issue same-sex marriage licenses because of her religious beliefs and gave her and her husband rosaries. She told ABC News:

I put my hand out and he reached and he grabbed it, and I hugged him and he hugged me. And he said, "Thank you for your courage." He told me before he left, he said, "stay strong." That was a great encouragement. Just knowing that the pope is on track with what we're doing, it kind of validates everything to have someone of that stature.

Pope Francis' reassurance made Davis more determined to defend her anti-gay marriage beliefs, even if that means going back to jail. She said to ABC News Wednesday:

I've weighed the cost and I'm prepared to do whatever it takes, even jail. It's still the same battle, we just have some more fighting with us now.

Staver said that Davis and Vatican officials agreed to keep the meeting under wraps until the pope left the U.S. because, he told The New York Times, "We didn't want the pope's visit to be focused on Kim Davis."