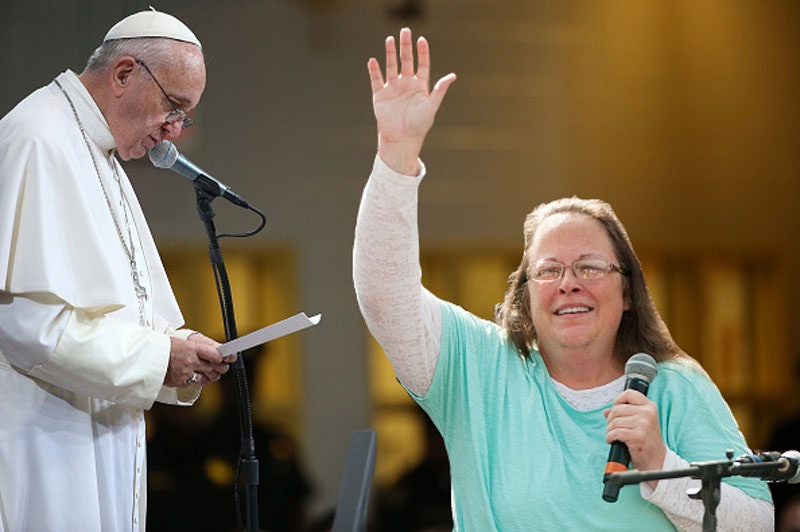 Pope Francis' first visit to U.S. soil was watched and heralded as a coming-to-Jesus moment for the nation and its lawmakers, but in the week since he's returned to the Vatican, the pontiff has continued to make headlines for his support for Kentucky clerk Kim Davis. The truth is the reason why Pope Francis would meet with Davis is obvious, but the fact it happened (and how we now know about it) is what's made this encounter so unusual. And if there's one big takeaway from the latest pope news, it's that two can't keep a secret if one of them sees herself as a living martyr.

Through her lawyers this week, Davis said she met the pope in secret last Thursday, during which he reportedly gifted her rosaries and told her to "stay strong." The pope has yet to comment publicly on the reported meeting, but Vatican spokesman Father Federico Lombardi told The New York Times, "I do not deny the meeting took place but I have no comments to add."

The meeting with Davis, assuming it really did happen, was held in secret for a reason because how else can the pope greet someone viewed by some as a champion of faith without getting dragged into an individual country's politics? While the pope makes clear where he stands on certain issues, such as gay marriage, he generally avoids delving into specific partisan issues and conflicts. He'll speak generally on the importance of reverting climate change, but he won't name names of companies or lobbyists. He'll criticize greed birthed out of capitalism without calling upon certain legislation that a nation should undertake.

But now that the heavily scrutinized clerk has turned her 15 minutes of fame into a 15-minute sit-down with the Catholic Church's highest authority on earth — and let it be known — how exactly the pope will address it has yet to be seen.

One thing's for sure: Davis' supporters are now using the reported meeting to validate her decision in defying the Supreme Court's landmark ruling that legalized gay marriage nationwide. Republican presidential candidate Mike Huckabee has been an outspoken advocate of Davis', even going so far as to greet her with open arms upon her release from jail earlier this month. And while the pope hasn't always been on the GOP's side of the aisle, his support of Davis gave Huckabee just the ammunition he needed to unleash these tweets:

It may just be @Pontifex's visit that pushes out of touch political class in DC to reject judicial tyranny & stand for #ReligiousLiberty.

I don't blame the pope for meeting with Davis because I get why he did it. But I also get how other people would try to capitalize on the meeting for reasons other than honoring someone's faith. Perhaps Davis should take some QT and think on Matthew 6:1.

Be careful not to practice your righteousness in front of others to be seen by them. If you do, you will have no reward from your Father in heaven.