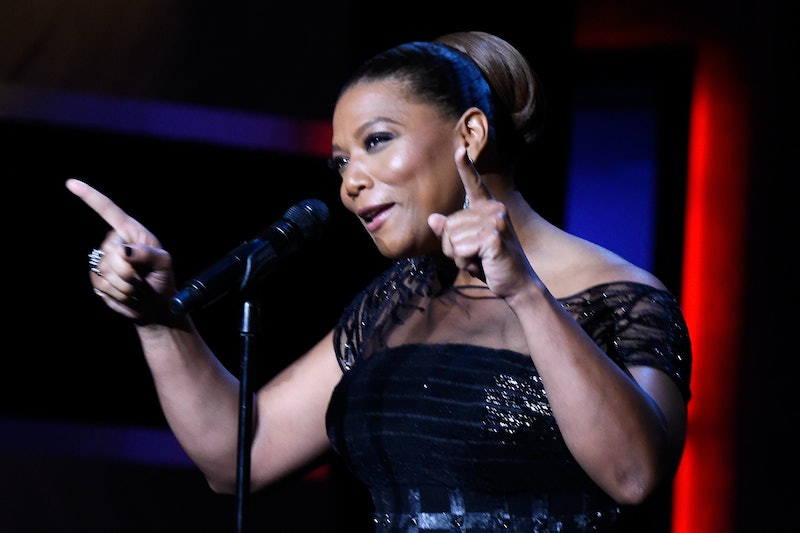 Queen Latifah may be better known these days as an actress, producer, and even a spokesmodel for companies like Pantene and CoverGirl, but back in the '80s and early '90s she was simply the reigning queen of hip-hop. While she may have always harbored big and small screen ambitions, in those days, she had one clear mission: Queen Latifah used her music to fight misogyny, something she told HuffPost Live in a recent interview she had to constantly deal with in the music industry.

The 45-year-old legend said she felt men were getting away with speaking to women in a disrespectful manner back then and that many people weren't blinking an eye when they heard lyrics that were as misogynist as you can get. In Latifah's own words:

For me at the time, I felt that there was a lot that needed to be said. There were a lot of male rappers who had opinions about women and certain words that I did or didn’t like. I chose to start at home and how women treat themselves and respect themselves and carry themselves, rather than say, "You don’t speak to me like this!" I chose to kind of take the route of uplifting women by trying to make some records that have some positive thoughts in it. I was young, crazy, and wild too, but still I felt like there are ways to make records that appeal to the masses but still have a message that leaves something with you.

You have to remember, the late '80s and early '90s were a time when it started becoming totally normal to turn on the radio and hear the words "hoe" and "b*tch," often times blocked out if the song played before 8 p.m., which only made the whole thing more tantalizing. Queen Latifah didn't name drop some of rap's worst offenders, but she didn't have to. Is it any surprise she would have felt offended and horrified having to hear well-respected peers like Dr. Dre and Snoop Dogg produce a song called "B*tches Ain't Sh*t" with the lyrics, "B*tches ain't sh*t but hoes and tricks/Lick on these n*ts and suck the d*ck/Get the f*ck out after you're done?

Queen Latifah's lyrics were ground-breaking at the time, but did they make an impact on the way women are spoken about or speak about themselves in 2015? Let's examine.

1. How Male Rappers Speak About Women

A total '90s anthem, Queen Latifah's "U.N.I.T.Y." featured a simple, straightforward command to women not to allow any guy to call them a "bitch" and you couldn't help but get the mantra stuck in your head: "This is my notice to the door, I'm not taking it no more/I'm not your personal whore, that's not what I'm here for/And nothing good gonna come to ya til you do right by me/Brother you wait and see (Who you calling a b*tch?)."

I wish I could say society has taken a giant leap forward since this song, but it's more like a teeny, tiny step with one foot still solidly stuck in the past. How else do you explain Action Bronson's 2011 song "Consensual Rape" or Jay Z and Kanye West's "That My B*tch?"

Hope on the horizon: Eminem appears to be becoming more introspective these days. Even, dare I say it, lovelorn ("Die Alone") and slightly (just a teeny bit) sweeter about how he speaks about the opposite sex. If he becomes a full-fledged feminist any time soon, both Queen Latifah and his daughter deserve to take full credit for it.

2. How Women Think Of Themselves

On "Ladies First" from 1989, Latifah made it clear that women should be proud of and inspired by the power of their gender: "Who said the ladies couldn't make it, you must be blind/If you don't believe, well here, listen to this rhyme/Ladies first, there's no time to rehearse/I'm divine and my mind expands throughout the universe."

The message has been heard — loud and clear — by contemporaries like Rihanna, whose "Winning Women," a duet performed with Nicole Scherzinger, reinforced Queen Latifah's message that women are bosses: "Where them girls at. (girls at)/That like to be in charge/When the heat get too hot, they just keep turnin’ it up/Never let ‘em cheat-sheet, they just sweat, gotta go hard/Where those winning women thats really willin to take it off!"

Even when Queen Latifah was cutting down someone who deserved it, she never lowered herself to his or her level. She confronted the issue head-on, but maintained her dignity by expressing herself in a way that made it evident she wanted little girls, as well as adult women, to be able take away a positive message from her songs. Case in point, in "Nuff of the Ruff Stuff" she raps, "The particular name of this queen is Latifah/I've often been classified as a feminine teacher/Collectively capture the heart of a nation/Love my culture and show appreciation/You're lookin for the black influ'?/I do want too give it to you."

An artist doesn't have to come out and declare herself an inspiration, though Queen Latifah was justified in doing so, but this is certainly inspirational:

We say to girls/You can have ambition/But not too much/You should aim to be successful/But not too successful/Otherwise you will threaten the man/Because I am female/I am expected to aspire to marriage/I am expected to make my life choices/Always keeping in mind that/Marriage is the most important/Now marriage can be a source of/Joy and love and mutual support/But why do we teach girls to aspire to marriage/And we don't teach boys the same?

Of course, it also includes the lyric, "Bow down, b*tches." Is Queen Bey using it in a playful way, which Queen Latifah noted in "U.N.I.T.Y" is a whole different story? Is she actually empowering women by taking back the word and using it to describe men? Or is she simply encouraging men and women to accept "bitch" as an acceptable word to use to describe both genders — something that's no weightier than calling someone a "jerk?" All up for debate.

In truth, it isn't so simple to compare misogyny in the '90s and today if we're using a few choice words as evidence, because the meaning of words can change drastically over time and can have different meanings in different contexts. There's also the argument that artists take on characters in their songs and that music should be able to push the envelope and be taken to the same places as experimental art.

Queen Latifah and like-minded female artists who came before her, and especially, after her in the feminist '90s, helped raise women up and make them realize they deserved to be treated like equals — like intelligent human beings who can hold their own and be in control of their lives and careers. A lot of the ground work she put down continues to hold water, but some of her points — including that men don't have the right to refer to women as their personal whores — sadly, continues to be lost on some.

More like this
Rihanna Skipped The Met Gala For Good Reason — But She Still Stole The Show
By Alyssa Lapid
Watch Pete Davidson Joke About The “Really Weird” Kanye West Drama On Stage
By Brad Witter
Kanye Walked Out Of Kim's 'SNL' Monologue Because Of These 2 Words
By Jake Viswanath
Are The Names Of Kim K & Kanye's Kids Tattooed On Pete Davidson's Neck?
By Bustle Editors
Get Even More From Bustle — Sign Up For The Newsletter