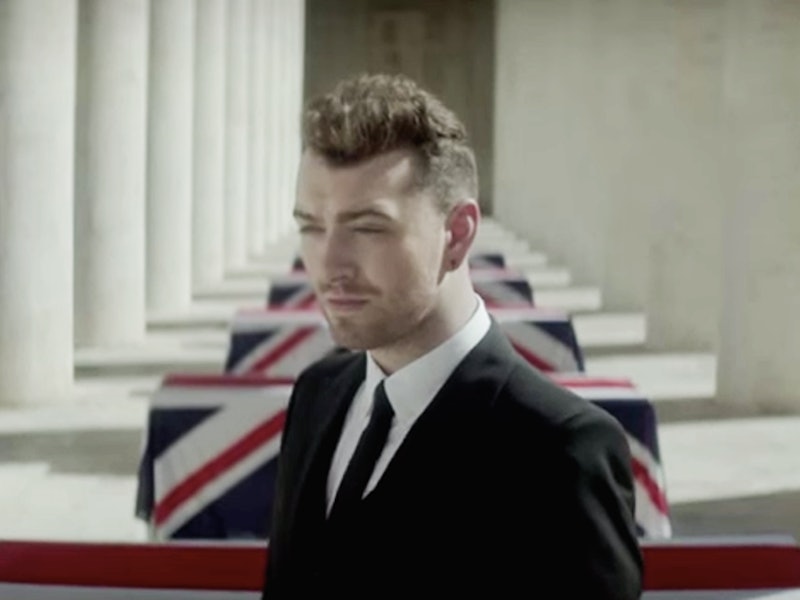 Do you guys mind if I just write about how excited I am for Spectre every day until the movie comes out on Nov. 6? No? Good, because I'm gonna. On Wednesday, the teaser for Sam Smith's video for "Writing's On The Wall" came out, and all I keep thinking is: what if Sam Smith was the next James Bond? It sounds weird, but hear me out! How am I not supposed to think that when he's the one doing the theme song for Spectre? You'd be thinking it too if you saw the way he was strutting through this teaser clip like some kind of mysterious stranger.

I know he doesn't have the rippling muscles of Daniel Craig (pause for salivation), but, if we can't have Idris Elba as the next Bond for whatever godforsaken reason, the only thing that would make me feel better is if they went in a completely different direction with it. Super different. Like Sam Smith different. Because that really would change everything. All of a sudden, Bond wouldn't be some broad-shouldered dude who can seduce a woman as soon as look at her; he'd be a sensitive, soulful crooner more interested in collaborating on his next track than taking out a kingpin. Do we still say kingpin? I don't know, but here's the clip in question so you know I'm not talking out of my butt about Smith being a good pick.

See what I mean? Sam Smith as James Bond could totally be a thing, and, if it was, here's what I think it would look like.

1. We Could Have A Gay Bond

CAN YOU IMAGINE. I would legitimately love this. It would take the franchise in such a different direction, and result in more (and better) representation for the LGBT community in films and movies.

I don't think Smith's version of Bond would be very good at cutting ties with people after he'd gotten everything he needed from them. I'm envisioning a lot of long-distance relationships and apologetic love letters explaining everything, but actually explaining nothing.

Because he has to! That's where he gets his power! The emotions that fuel him to be a spy come from the hurt he'd feel at getting his heart broken.

4. And He'd Have A Great Attitude About It

Can't have heartbreak without breakups, and nobody knows this better than Smith/Bond. He'd stand up at the Annual Spy Awards (uh-huh, they're a thing, don't question it), and thank all the people in his past who made him miserable, forcing him to become a top-shelf spy.

5. He Could Use His Real Name Undercover

Screw "James Bond," is there any better spy name than "Sam Smith?" Just enough personality to sound real, but bland enough that you'd never remember it once he was off and away and back undercover.

Listen, Daniel Craig is great and all, but just admit that you'd watch this movie if they made it.