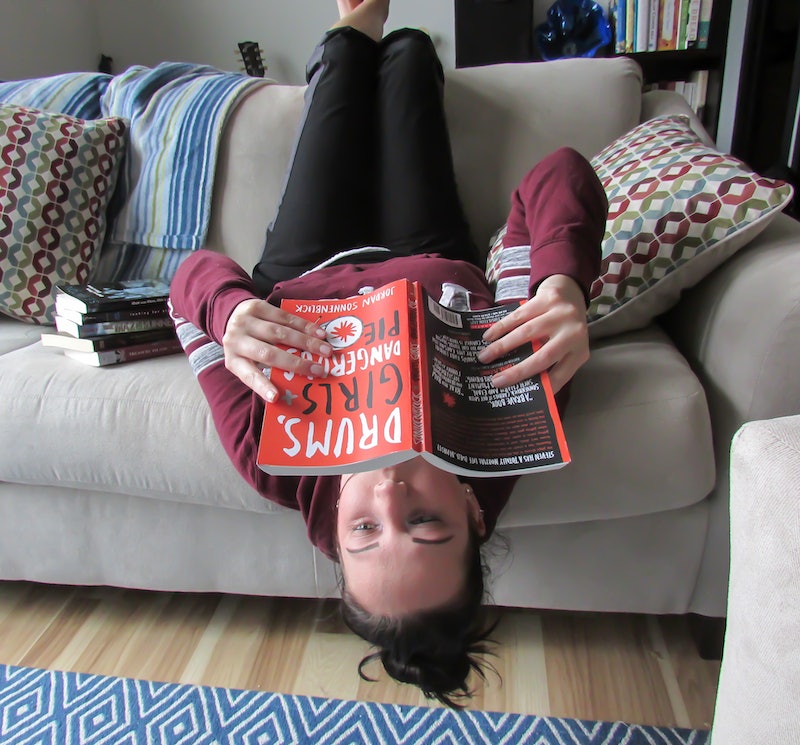 Get ready to hate me. I’ll give you a moment… All set? OK. Here it goes: I am totally not into the whole adults reading YA deal. I know, I know; I’m a book genre snob and it’s terrible. But even though I fully understand the idea that genres like “YA” and “New Adult” and “Magical Realism” were created, at least partly, to help publishers, booksellers, and Amazon organize the seemingly endless list of new titles that hit the literary market every year, I am an imperfect person, filled with imperfect, judgmental, book genre hang-ups — so sue me.

I didn’t finish the Harry Potter series. I don’t read Game of Thrones. I own exactly one Stephen King book and it’s On Writing. While I’m glad that Katniss seems to be empowering young girls everywhere not to eat their peers, she’s probably not going to find a home on my bookshelves anytime soon. I can handle humor in small doses, but after a while, my laugh muscles give out. I don’t care for time travel, unfamiliar galaxies, futuristic dystopias, or inanimate objects behaving in a manner other than that of the absolute mundanity of which I’ve grown accustomed.

So naturally, I just spent a week reading only YA fiction. That's right, I'm a rebel. Against myself. Now, since it hasn’t been that long since I was a YA myself (I do remember the Babysitters Club ya’ll) I decided to add a little twist: I read only traditionally male YA fiction — aka books told from the perspective of young male protagonists, about young male protagonists, written by (mostly) male writers. I even threw some dystopia in there for good measure. This is how it all went down.

1. I Started Reading For Pleasure Again

Now, let me make one thing clear: in my world, reading is always pleasurable. A day is just not a day if there hasn't been some reading in it, and that reading is almost always well enjoyed. But at the same time, I read a lot. I read for my job. Then I read for my other job. I read before I write. I read after I write. I read for educational purposes. I read to kill time on the bus. So while it's always a joy to read, I hadn't noticed that lately I've pretty much stopped reading just for the heck of it. All of my reading has become purpose-driven reading. It's reading with a pen in my hand and Post-it notes on the table. So when I dove headfirst into a pile of YA, it was the first time in a long time I was reading just to read.

In that spirit, I went all out. I let myself get lost in story again in a way I hadn't done in quite a long time. It was fun, and a little addictive. And for some reason, I started having these crazy, vivid dreams at night about being chased by monsters and having to save the universe... but that's probably another story.

2. I Got Totally Sucked In

That's right, I fell hard. The Maze Runner ended on a cliffhanger and shot my entire experiment to hell (at least temporarily.) My thoughtfully-curated list of YA titles went straight out the window, because I HAD TO KNOW what happened to Thomas, Theresa, Minho, and the fate of the entire human race. Looking for Alaska would have to wait, because I had a series to finish... and a lot of self-reflecting to do. Had I been wrong about YA all along?

For a moment, it sure seemed like it. I left the bookstore with a stack of dystopian YA fiction covered in stickers advertising soon-to-premiere page-to-screen excitement. (I hate when people put stickers on my books and promptly removed all of them.) But two-and-a-half books in and I was about ready to Wikipedia the remaining plot and call it quits. Read on I did, however — I had an experiment to finish, after all.

From the S.E. Hinton's greasers, to the millennials of Drums, Girls & Dangerous Pie , to the profanity-laced exchanges between John Green's boys in Looking for Alaska , my vocabulary was a mess (I'm kind of a language sponge — immerse me and I will speak.) I noticed I was using the word "digs" a lot. As in: "She digs that" or "Come back and hang out in my digs," but hardly ever in reference to the actual act of digging. Like, as one would with a shovel.

4. I Began To Think About The Boys From My Past Differently...

Let me tell you something: Drums, Girls & Dangerous Pie is a dangerous book to venture into in your not-so-young adulthood. It will try to change your mind about everything you ever believed about the boys from your past, and it will come disastrously close to succeeding, and therefore altering the course of humanity forever.

The main character, Steven, is possibly the sweetest, most maturely self-aware kid to ever grace the pages of YA fiction. He is socially conscious. He cares deeply about his family. He thinks seriously about the future. He openly admits to flaws, insecurities, and experiences of unrequited love. He explores why he hasn't been able to work up the courage to ask the popular girl of his dreams out on a date; and then later he admits to being a blind fool for not realizing the quirky girl next door is actually perfect for him. Plus, he's a drummer (I had a serious thing for YA drummers in my YA days. Now I like fully-grown drummers.)

Had I simply misunderstood the deep, inner lives of all the boys I'd ever known? There was some serious food for thought in this one.

5. ...But I Ultimately Didn't Give Them Too Much Credit

After all that, it turned out to be seriously short-lived food for thought, because following Drums, Girls & Dangerous Pie I ventured over to Looking For Alaska, which features possibly the most insensitive and immature of all John Green's YA characters. It turns out Dangerous Steven was a fluke. These were the boys I grew up with. It was almost refreshing to have them back — at least in fictional form.

So here's my conclusion: YA definitely deserves a lot more credit than I was giving it. Sure, not every book is for every reader, and I don't know that I'll ever dive into young adult dystopia ever again, but some of the YA titles on my list were down right fantastic.

Drums, Girls & Dangerous Pie was adorable, thoughtful, sympathetic. The Absolutely True Diary of a Part-Time Indian was hilarious, heartbreaking (I’ll pretty much never get over Oscar), and beautifully written. I should have devoured Treasure Island about 15 years ago. And The Maze Runner was kind of like that first time you dabbled in recreational drug use in college and realized you better get in and get out while the gettin' is good, otherwise you’re apt to turn into a lifer and that’s not going to be so pretty. Still, maybe one day, I’ll finally find out how Harry Potter ends.

As for right now, I’ve got some Joan Didion sitting on my desk, a little Hunter Thompson on my coffee table, a hot-off-the-press copy of Elizabeth Gilbert’s Big Magic at my bedside, and I absolutely can’t wait to dive in.