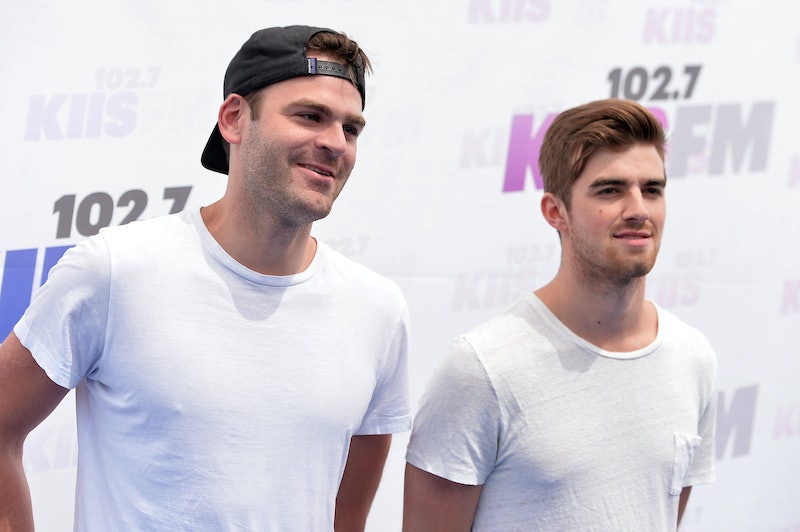 You might not immediately recognize the name The Chainsmokers, but there's a good chance you've heard at least one of their songs. And there's an even better chance that that song is 2014's "#Selfie." You know the one: Girl in club bathroom complains about a bunch of stuff and declares, "But first, let me take a selfie" over a beat that sounds like your craziest night out ever. Well, the guys behind that song, Andrew Taggart and Alex Pall, make up DJ duo The Chainsmokers, and while they've kept super busy since "#Selfie," a certain high-profile fan has even more people taking notice a year after their big hit. Justin Bieber endorsed The Chainsmokers' single "Roses" and during an interview at Bustle's office, the pair explain just how massive the 21-year-old's stamp of approval really is.

"We just heard stories that he liked the song and stuff, but never actually had any video or audio proof of that," Pall says jokingly.

In the public eye, the Bieber connection to The Chainsmokers began when, during an interview with Z100 New York, the "What Do You Mean" singer called "Roses" his favorite song of the moment. "Roses" features vocals from up-and-coming singer Rozes (appropriate) and background vocals from Taggart. It's a much chiller vibe than that from "#Selfie."

Not that we didn't believe it, but, like, you know, it was cool. We're all collectively just very impressed by all the stuff he's doing right now. It was a really cool thing for us because he's, like, in another stratosphere compared to everyone when it comes to artistry. You know, he's, like, one of the biggest pop stars on the planet, if not the biggest, so it's just cool when you have someone like that say something. It's awesome.

While the guys didn't know Bieber personally before he spoke out about their song, they have chatted with him since. Taggart explains, "We Facetime with him pretty frequently because our old videographer [Rory Kramer] is his videographer, so he'll say whats up and Justin's always with him." In addition, the duo shared a video of Bieber rapping over "Roses" on their social media pages and it proved to be a hit with fans.

As for the possibility of a collaboration, The Chainsmokers definitely sound up for it. Pall explains,

We try to plant the seed. I feel like things just happen naturally. Everything we've ever done is very organic and everything we've tried to force has totally not worked, so it's just cool that he's obviously, like, put his stamp of approval on a song. Hopefully, at some point, maybe we'll hang out with him, and I would find it hard to believe if we didn't start talking about music or something. But who knows with that guy. Like, that guy's life is crazy ... It makes our lives looks like child's play.

That said, their lives are pretty crazy, too. Pall and Taggart were in New York City for only a few days before going back out on a 37 show tour, which includes stops in Asia and North America. According to Taggart, "We're the highest touring act in, I think, the world. We did over 300 shows last year." This might sound insane, and they agree that it's "nuts," but they both seem to have a good handle on things and truly enjoy what they're doing. As Pall counters when I say they must be exhausted, "I think everyone's tired. Always. I don't think it's just us. Are you tired?"

He later sums things up best when he says of their shows, "We're lucky we have a really cool fan base that's super involved in everything that we do. So, when we do travel, we usually have a really good time. And the day that stops happening will be a very sad day."

The Chainsmokers are not working on an album currently, but are interested in putting one out, possibly next year. For now, their single "Roses" is available on iTunes and available for streaming on their website.